As I've previously written, we enjoyed last year's visit so much that when it came time to return home, we felt like the six week trip had been too short.  Shortly after arriving home, we started talking about going back to Thailand the following year.  The plans took shape over the next couple of months and it was decided to stay for three months this time and to add Vietnam, Cambodia and Chiang Mai (Northern Thailand) to our itinerary with a departure date from the United States of Thanksgiving Day (November 26, 2015).

At the time the plans were made, Thanksgiving was many months away, but time passes quickly and before we knew it, we were packing our suitcases and going over our lists of things to do.  Flying on Thanksgiving Day turned out to be a great decision.  The majority of people who were traveling for the holiday had already reached their destinations which resulted in short lines at the airport and no large crowds of people.

The first leg of our journey was from San Francisco to Seoul, Korea on Asiana Airlines.  We had a wonderful cabin crew who were very attentive and efficient.  Our seats were in business class (this flight had no first class section) which I highly recommend for long flights (this one was 12 hours).  Because of the configuration of first/business class one is able to stretch out and move around the cabin which results in feeling refreshed upon landing.  I realize this isn't an option for many people - we are fortunate that my husband built up a large account of flyer miles during his years of business travel and I am so grateful that those miles allow us to travel in this manner. 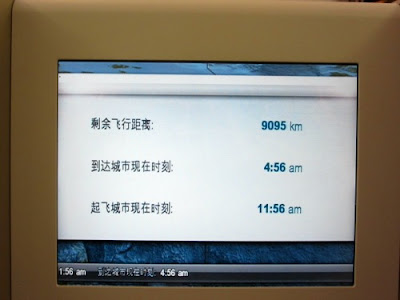 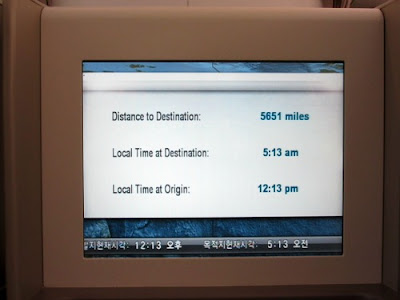 I don't think I will ever get over the novelty of the pods - these seats remind me somewhat of the cubicles found in many offices these days.  The pods are staggered rather than in rows which provides additional privacy for passengers.  If you look closely, you can just see the top of the head of the person seated in this pod which was in front of and to the right of my seat. 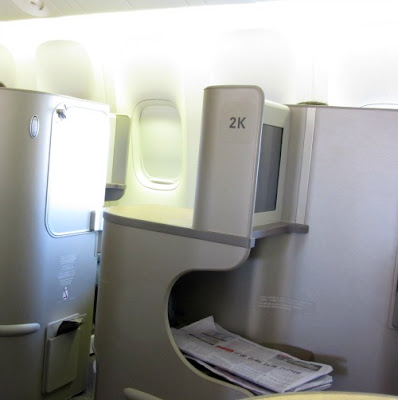 When it is time to sleep, the seats recline into a flat position like a bed.  When laying flat, legs and feet go into the cubby below the monitor.  Like this: 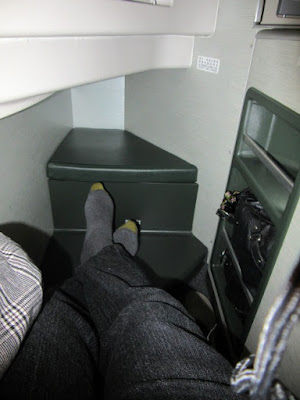 When not sleeping/reclining, it and the one below can be used for storage.  Snuggling up with the pillow and blanket provided is almost as comfortable as being in one's own bed at home! 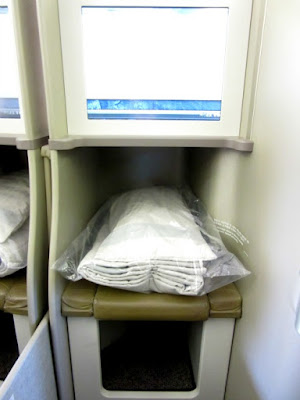 The dining experience is almost better than the pod.  Real linens, dishes and silverware are provided - no plastic tv trays on a trip like this!  Asiana outdoes themselves with the food.  On this particular flight, dinner was served early in the flight, followed by a generous snack a couple of hours later, followed by another full meal after that.

We were given a choice of a Korean style meal or a Western meal and we both chose the Korean meal.  The first course was an appetizer of skewered olives, artichoke hearts, mozzarella balls and sun dried tomatoes on a lettuce leaf. 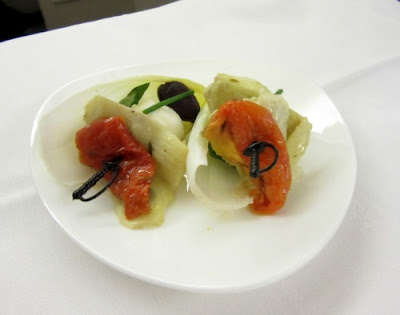 The starter was followed by soup.  There was a mix-up with the soup and my husband was served the leek and potato soup that came with the Western meal.  This worked out perfectly for him because the Korean meal came with pumpkin soup and hubby detests all things pumpkin.  The flight attendant apologized when she realized her mistake, but we assured her that it had worked out perfectly. 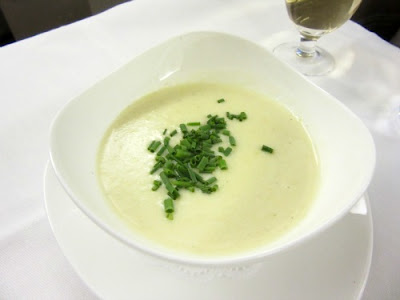 Now me, I love pumpkin and thoroughly enjoyed the pumpkin soup. 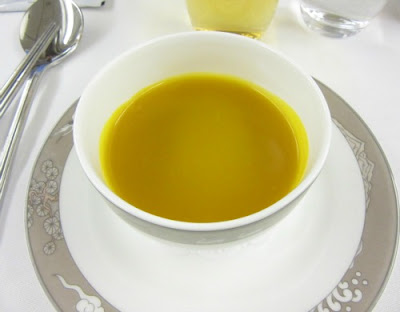 Next up was the main course, although I would have been perfectly content with just the appetizer and the soup.  Bibimbap is a Korean dish of room temperature vegetables and meat mixed with rice.  The word bibimbap literally means mixed rice.  It was traditionally eaten on the eve of the lunar new year because people wanted to use up all of their left overs before the start of the new year.  They accomplished this by putting all of the leftover food in a bowl and mixing them with rice.

If is also believed that this dish was eaten by farmers because it was the easiest way to make food for  large groups of people working in the fields.

A fried egg is usually part of bibimbap, but was not included in our meal.  I'm guessing the logistics of serving fried eggs on an airplane just don't work out very well. 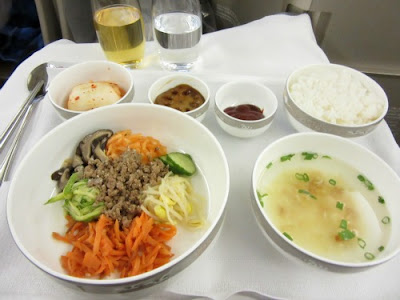 Included in the photo above clockwise from the top left is kimchi which is fermented cabbage, lotus root in a sweet sauce, chili paste to season the bibimbap, steamed rice to mix with the bibimbap, fish soup and the bibimbap before the rice is added .

This is what the bibimbap looks like after all of the ingredients have been mixed together: 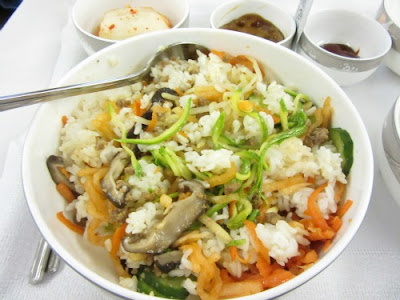 I was really feeling full by now, but we weren't done yet!  Following the main meal, we were served refreshing fruit. 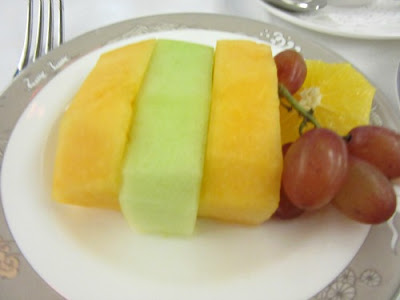 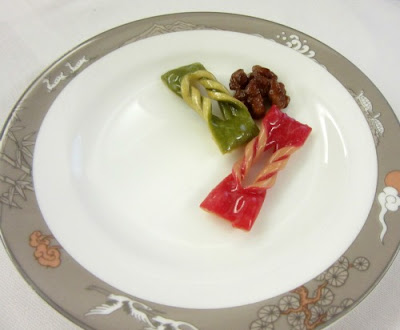 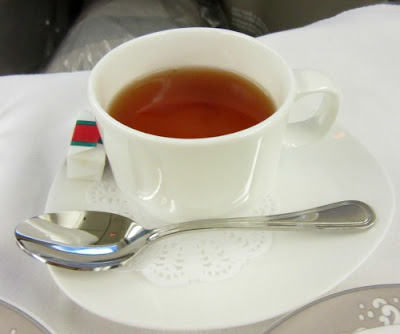 Husband asked for and received the dessert being served with the Western meal.  It was a decadent concoction of chocolate cake and whipped cream frosting topped with shavings of white chocolate. 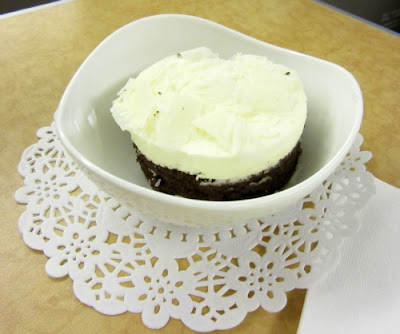 Unfortunately, I didn't take pictures of the rest of the meals.  Hubby opted for the snack later and chose a hot, toasted ham and cheese sandwich on a baguette.  Asian style noodles were also available.

For our second meal, we also chose the Korean meal, which started with a salad of mixed greens, followed by a stew of marinated braised beef, mushroom, eggplant and carrot accompanied by stir fried vegetables and steamed rice as well as fruit and cheese.  I swear a person could gain ten pounds on this flight!

An Asian custom that I really enjoy is being given a hot wash cloth before and after the meal for cleaning hands and face. 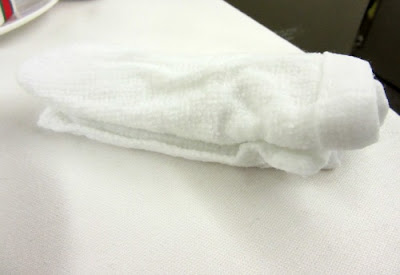 Once we arrived in Seoul, we had a three hour layover until our flight to Bangkok.  The airline lounge had a very nice spread, but after all that food on the airplane there was no room in my stomach for more.  Made me want to cry!

The business class section of Thai Air was not as opulent at Asiana, but the seats fully reclined and I decided to try to sleep for this leg of the journey as I had been unable to sleep on the first flight.   Husband decided to stay up and take part in the meal that was served.

As on the first flight, passengers were given menus: 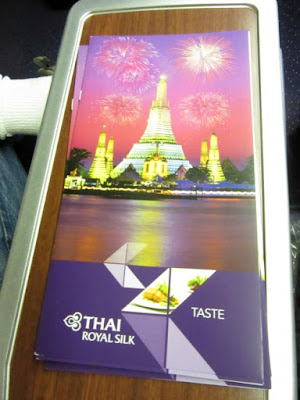 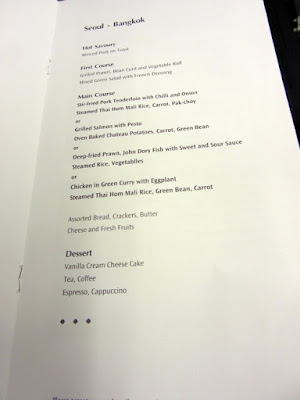 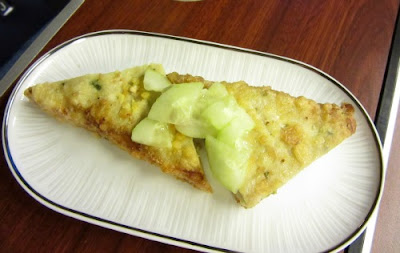 Followed by kimchi, a roll, green salad and shrimp and asparagus spears: 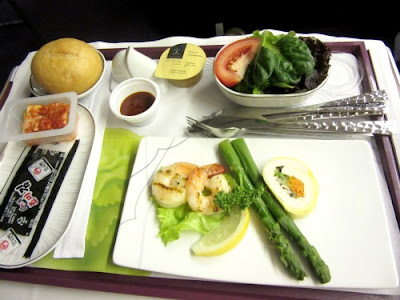 At this point, husband declared he had reached his limit and declined the fresh fruit and dessert, so I have no photos to share, but it looked good!

We landed in Bangkok at 1:30a.m., caught a cab to the apartment we have rented (same place as last year) where we arrived at 3:30a.m., decided we were too wound up to go to bed and hit the streets where we had a quick beer.  Once we'd settled down a bit, the exhaustion hit and we made our way back to the apartment and were in bed by 5:00a.m.  Wow, it's been a while since we pulled an all nighter!

If memory serves me correctly, it's going to take about 4-5 days before I settle into this time zone.  We are 15 hours ahead of California time and that kind of a difference really messes up my inner clock.

Now that we are here, we are looking forward to the food, the warm weather and the wonderful people.  Especially looking forward to seeing the people who work at the restaurant next door and at the pub down the street.  I hope they remember us from last year!