Despite being a huge city, it's amazingly easy to get around in Bangkok.  Traffic can be very heavy, but there are many different modes of transportation to choose from that will get one where they want to be.

During our stay, if our destination was within a mile we walked.  We estimate that we averaged 2 - 3 miles walking per day.  It was a great way to see the neighborhood, run errands and get in daily exercise.

Besides walking, there are many other options such as bicycling. 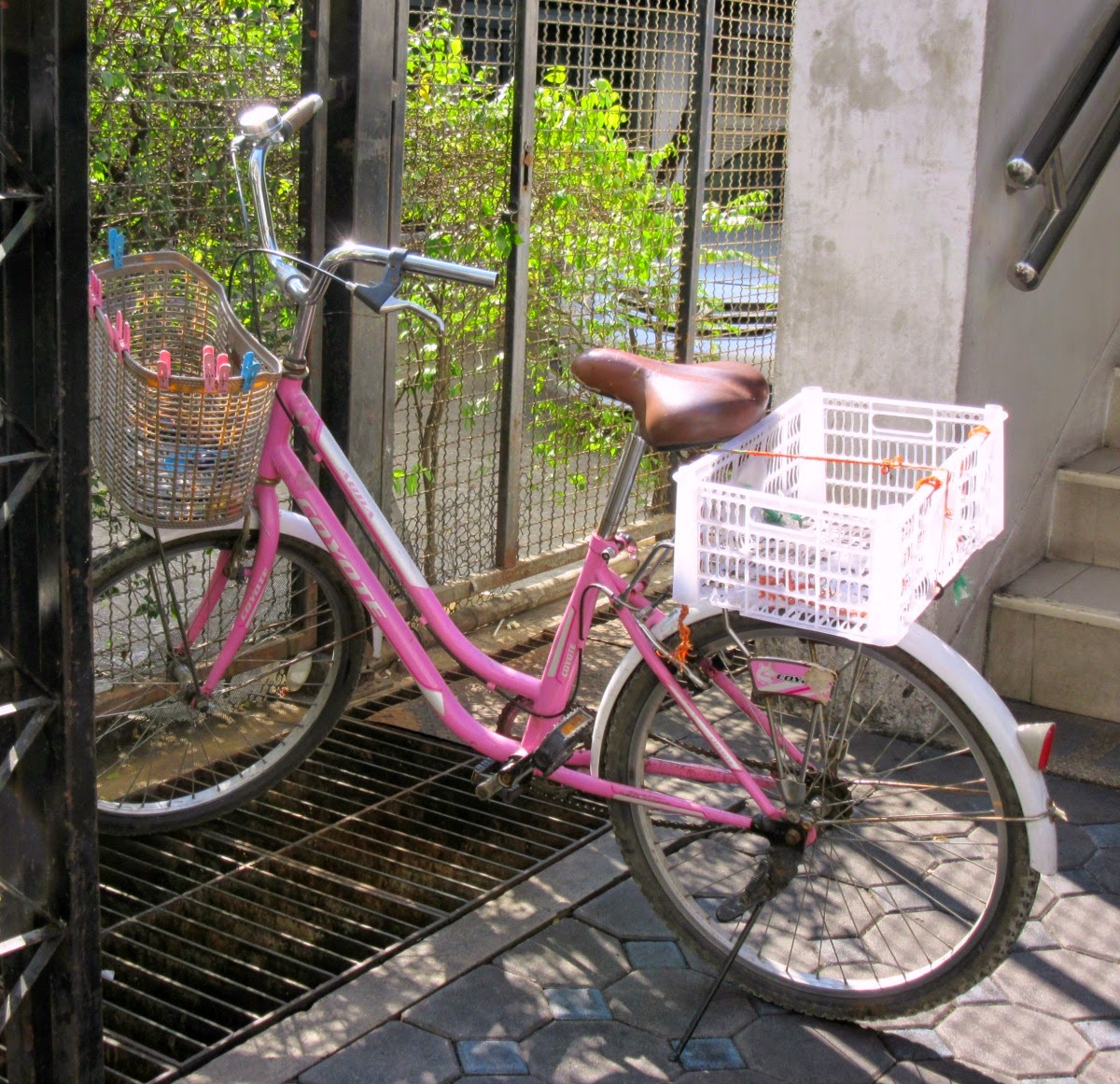 These green bicycles are available for rent as part of the city's program to encourage cycling as a way to reduce traffic congestion and pollution.  The bikes are found at stations where they are locked in racks.  To be able to use the bikes, registering for an RFID smart card is required.  This program was launched in 2012. 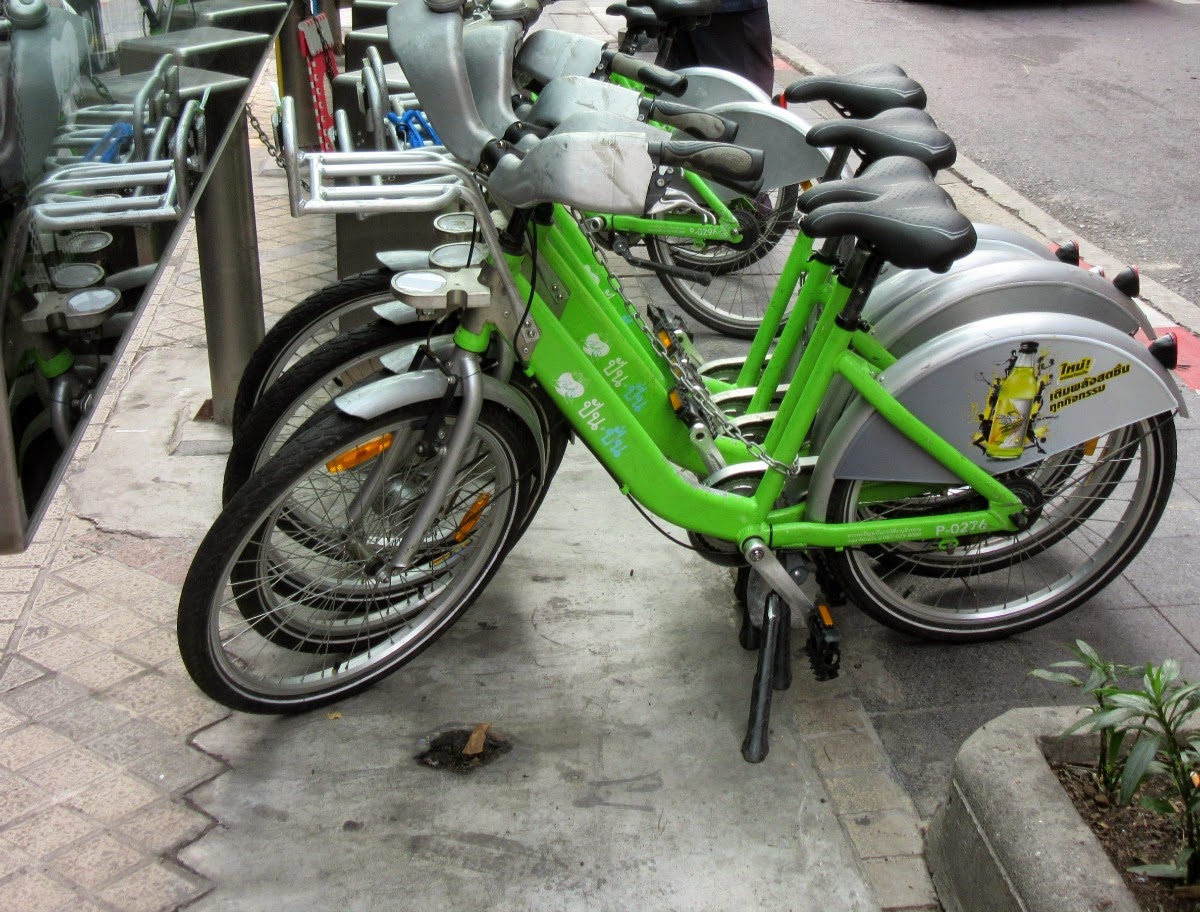 Scooters and motorcycles are very popular ways to get around in Bangkok.  It is not uncommon to see three or even four people riding one motorcycle.  Motorcycles and scooters are also used to transport all kinds of things.  I saw loads of wicker baskets, furniture, televisions, construction materials, big bags of ice and propane tanks strapped on the backs of motorcycles and scooters. 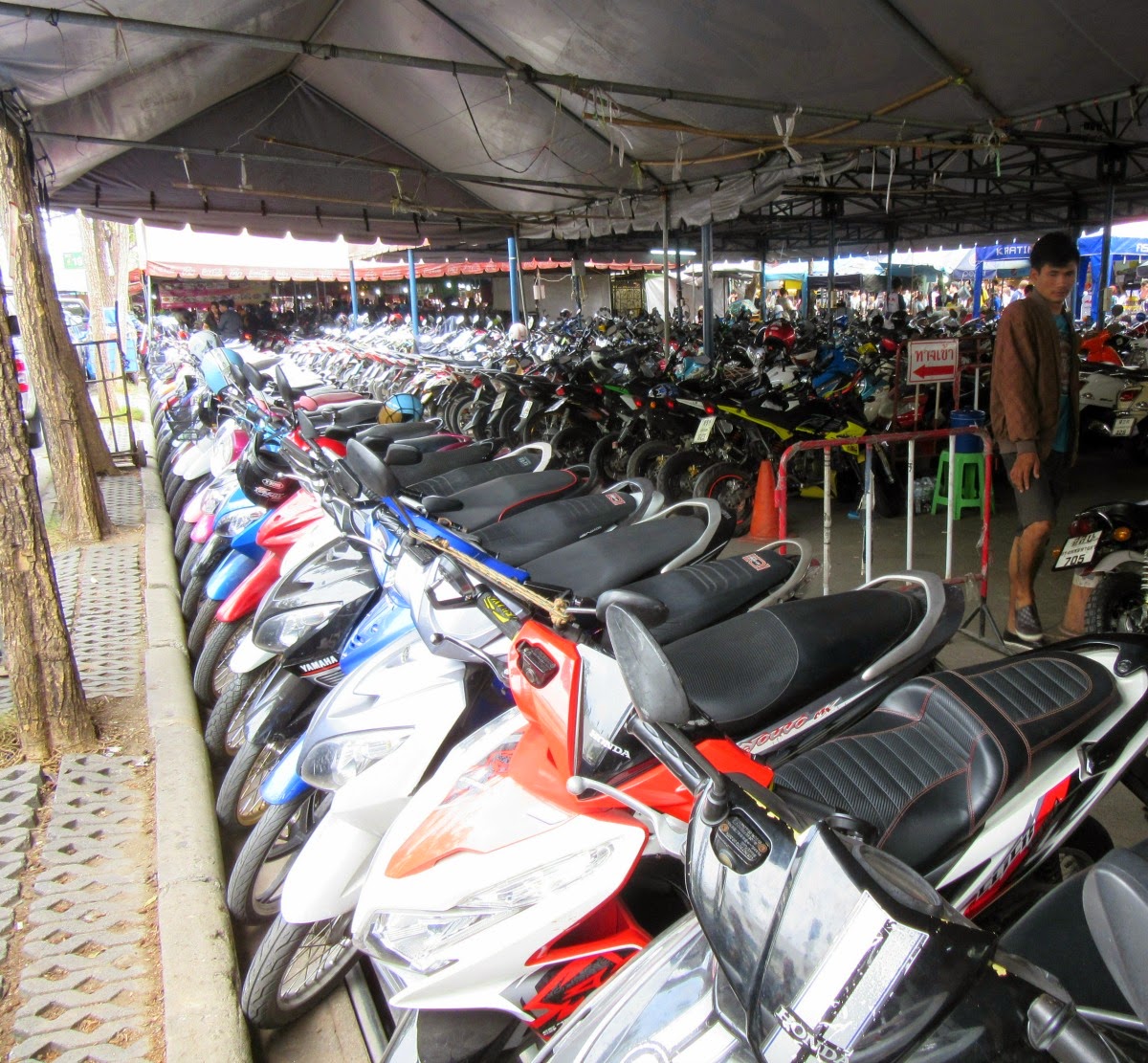 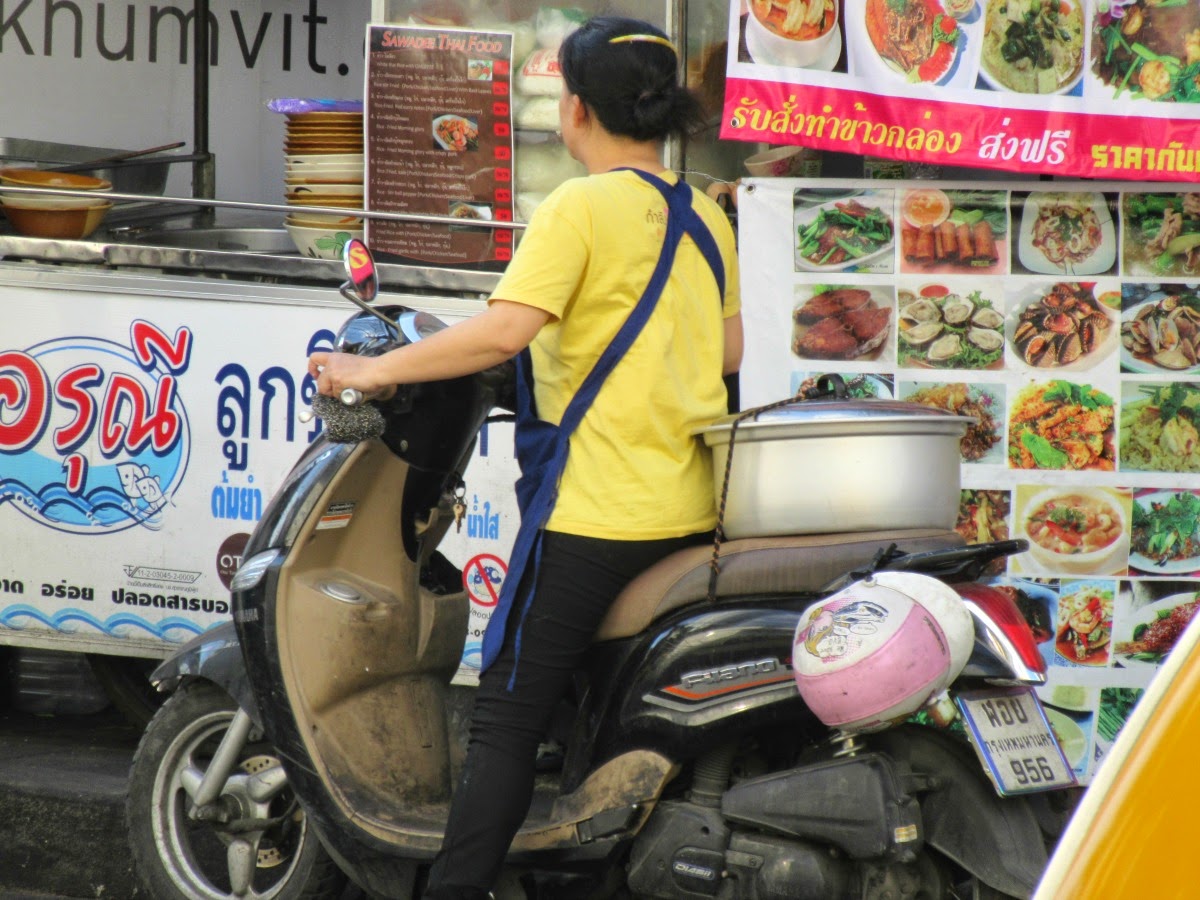 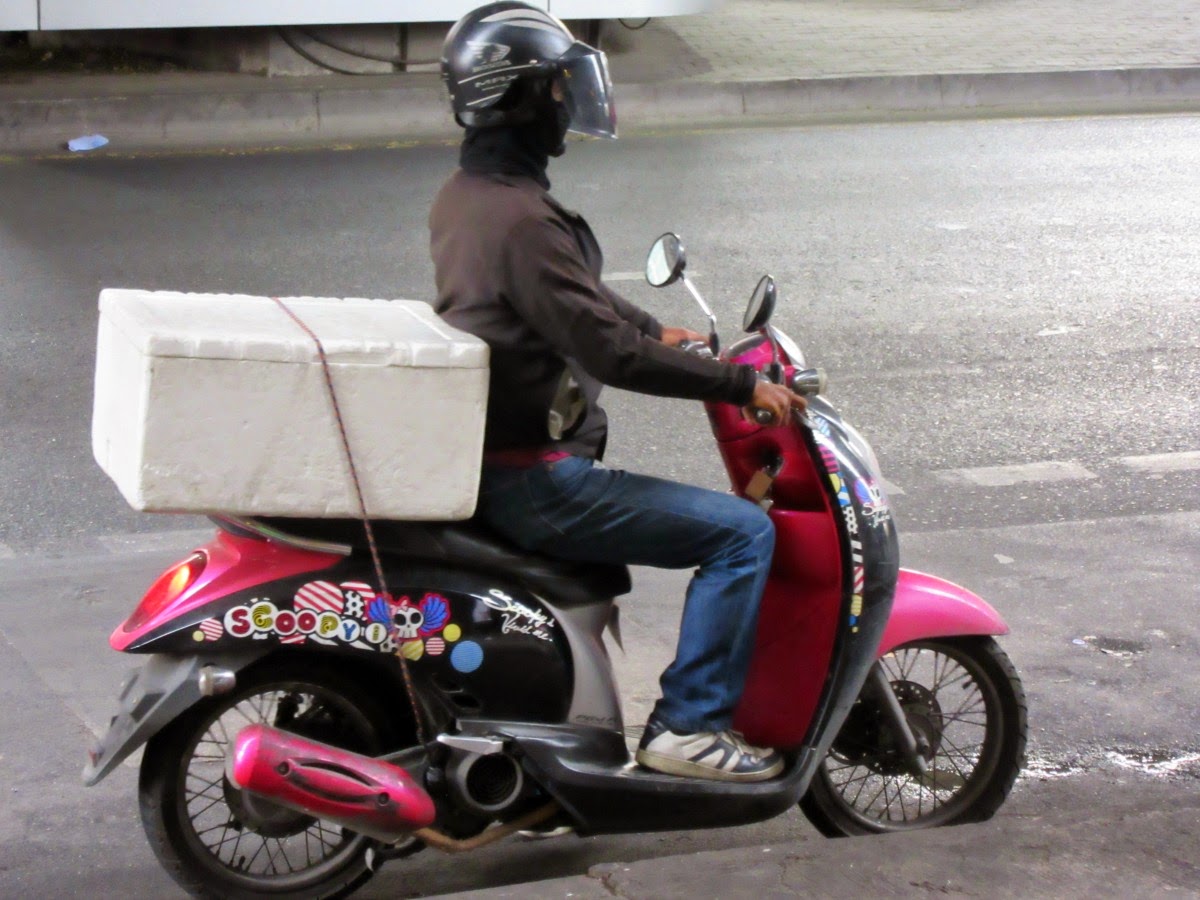 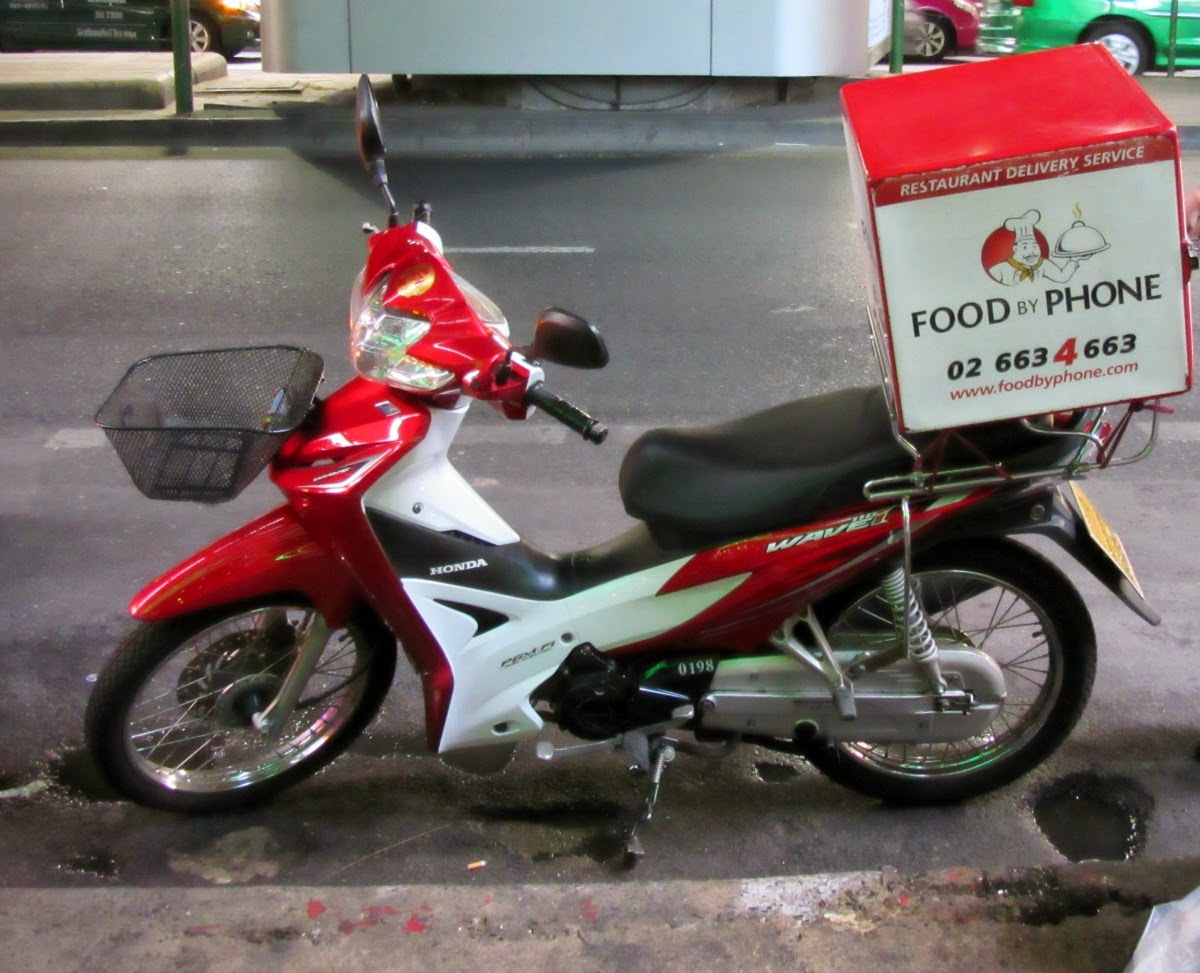 A popular and inexpensive way to get around is by Moto Taxi.  The drivers of Moto Taxis can be found on most street corners and are identified by the orange vests they wear.  There are over 49,000 licensed Moto Taxis drivers and it is estimated that they carry 2-3 million passengers per day.

Male passengers are expected to straddle the seat behind the driver while females prefer the more precarious side-saddle position. Although Thai law requires both driver and passenger to wear helmets, this is rarely enforced and most motorcycle taxi passengers decline to wear helmets when they are offered. 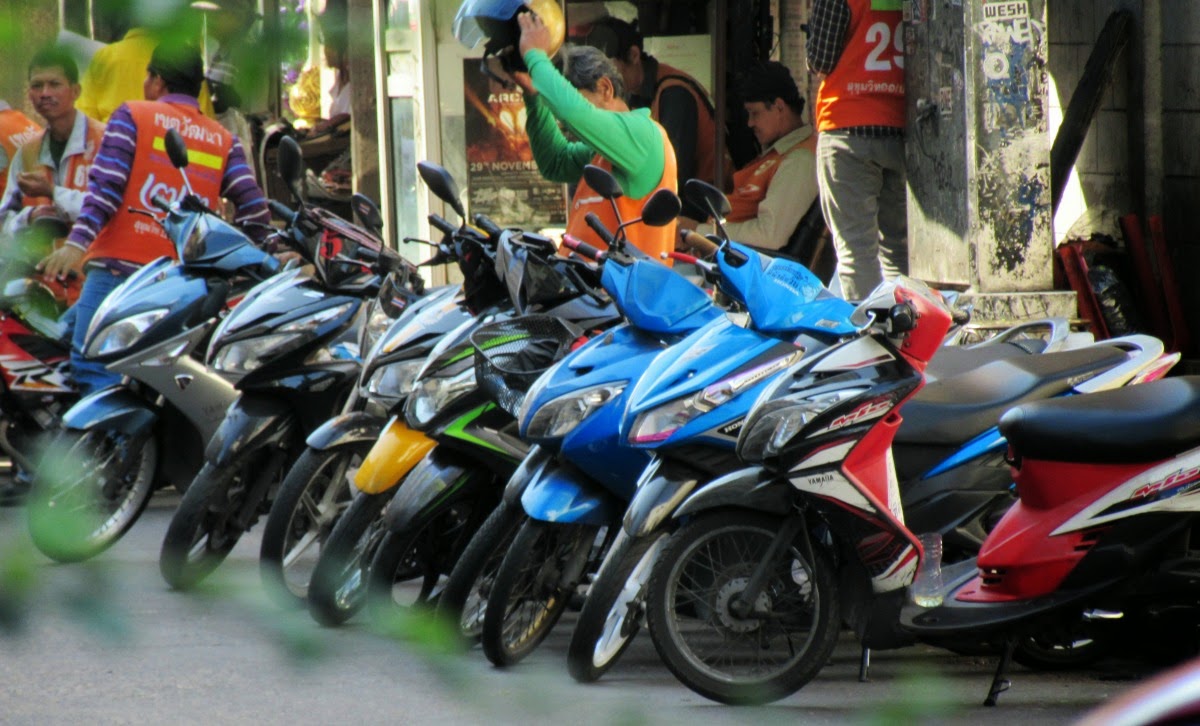 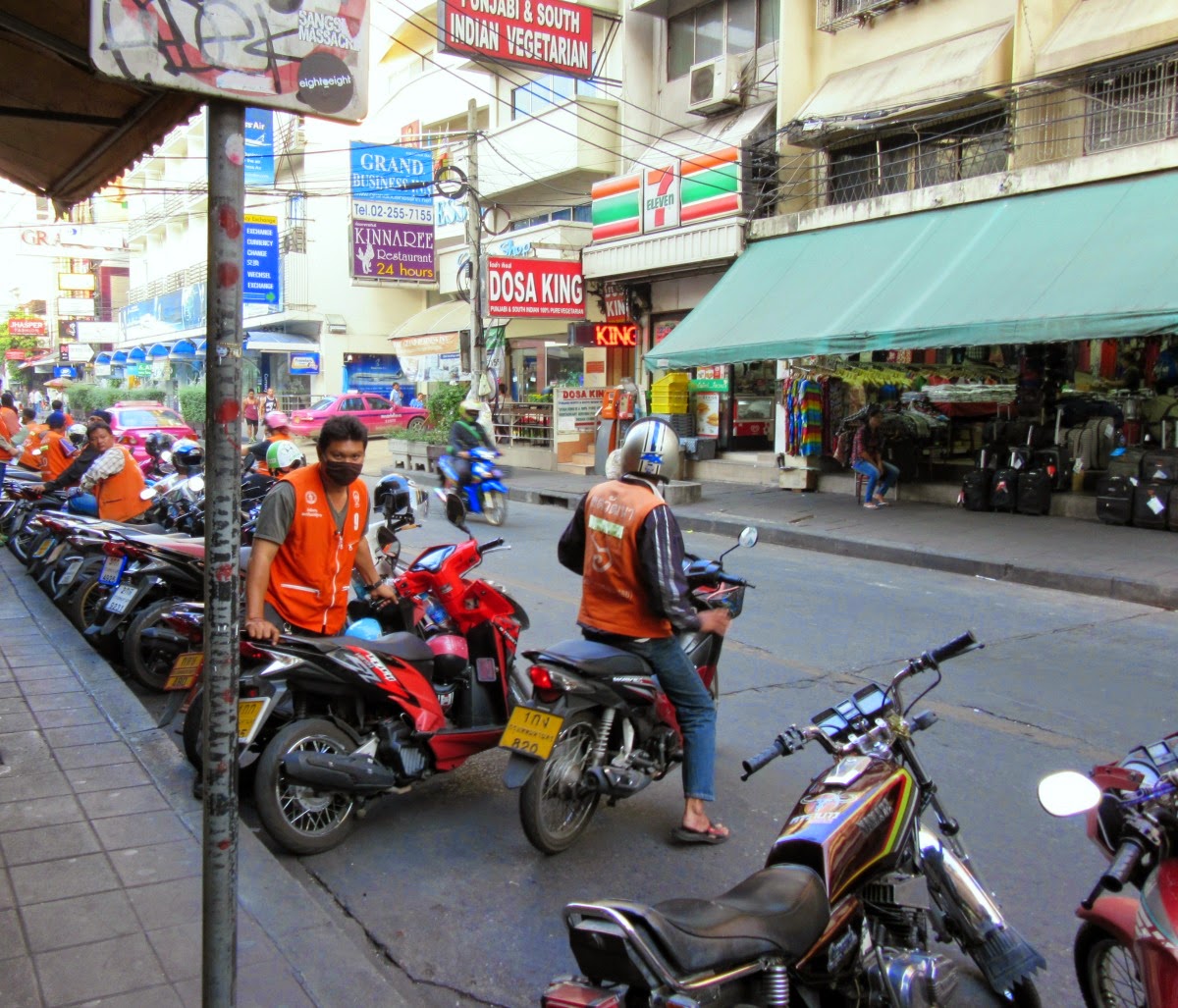 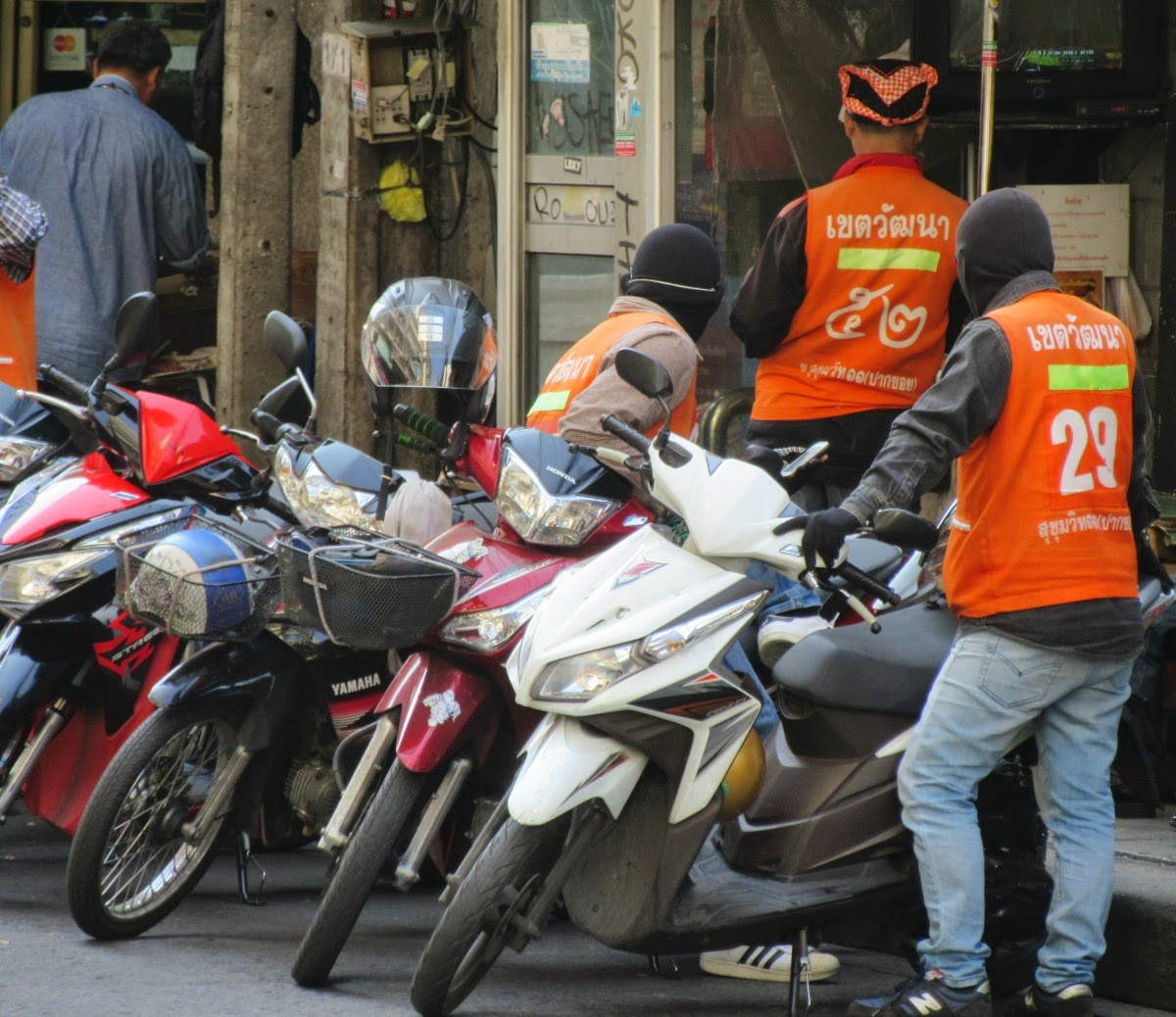 A ride on a Moto Taxi is not for the timid as the drivers take pride in finding creative ways to navigate clogged streets and will often perform death defying maneuvers in order to reach their destinations.   Safety statistics are not kept for the Moto Taxis, but with 38 highway fatalities per every 100,000 in population, Thailand ranks second only to the Dominican Republic as the most dangerous place in the world to drive.

The tuk tuk is a whimsical cross between car and motorcycle and a ride in one of these is great fun.  However, even after negotiating the fare and agreeing on terms before the ride, the drivers will often try to pressure their passengers into visiting jewelry stores or tailors because they get commissions/gas coupons for bringing in potential customers.   If one is in no hurry and doesn't mind playing the game, hiring a tuk tuk can be a fun and inexpensive way to get around.  Otherwise, it's probably best to avoid the tuk tuks. 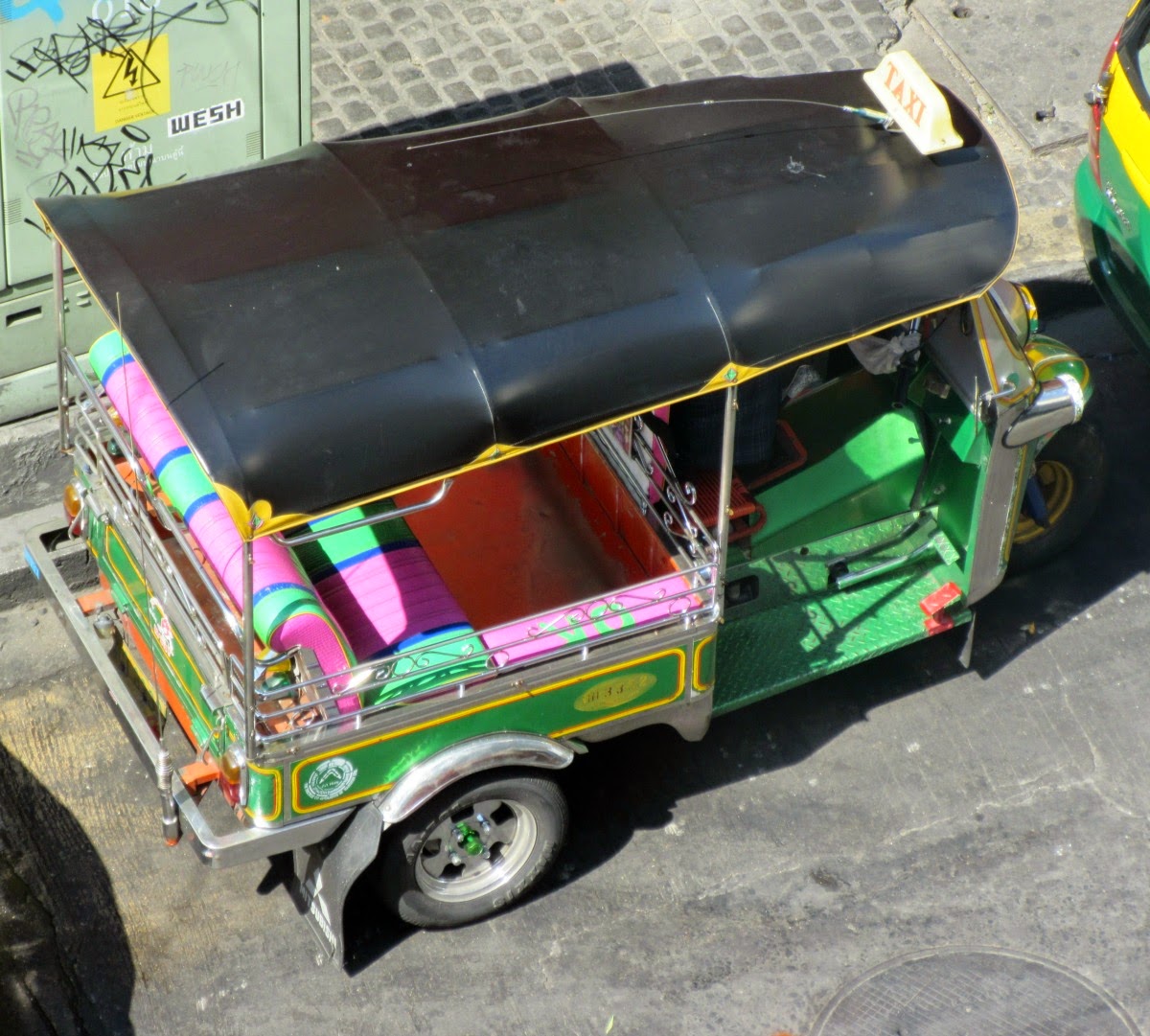 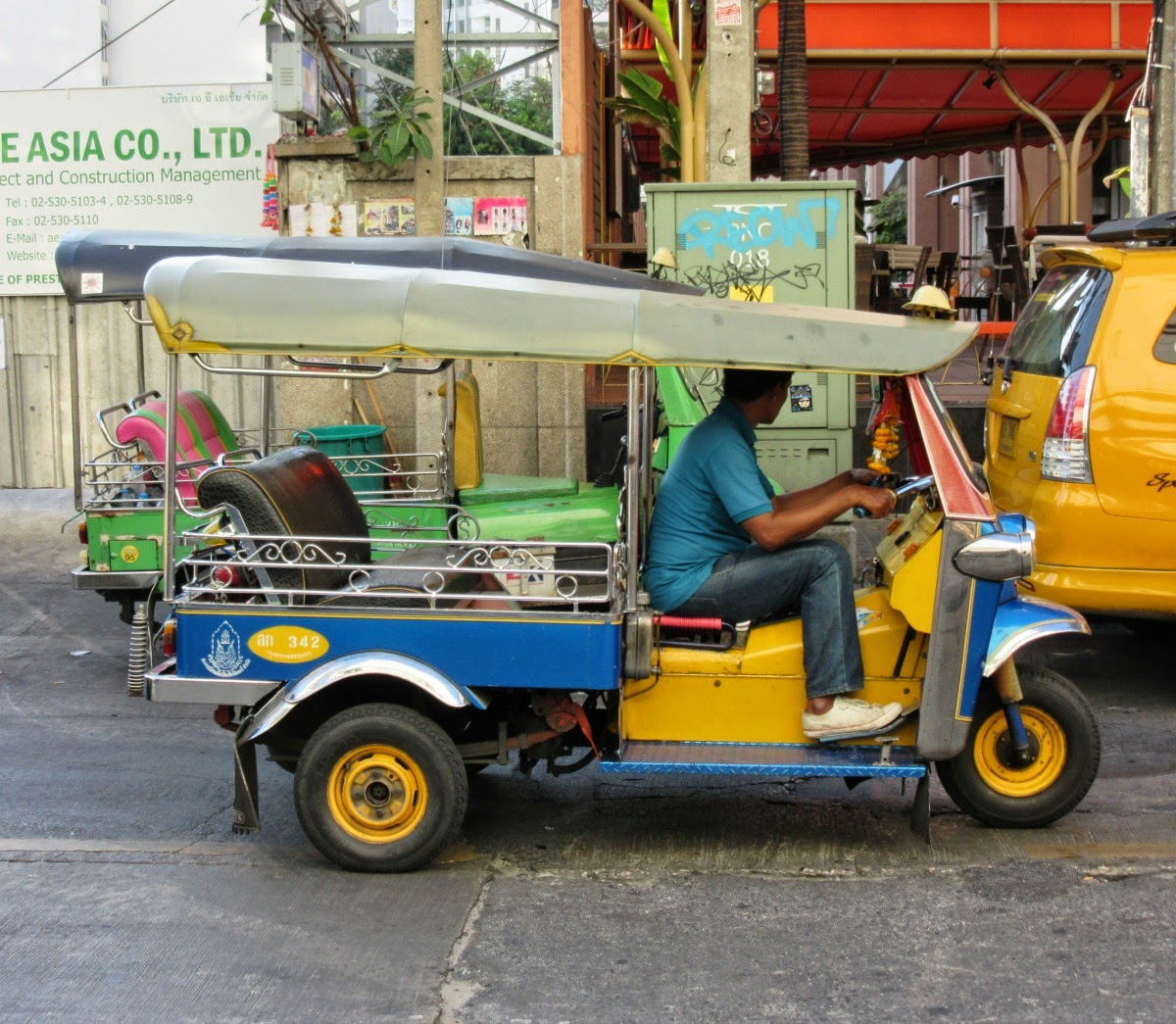 We did not ride any buses while in Bangkok, but they are definitely an option.  There are air conditioned buses which cater mostly to tourists and the open air buses which are ridden mostly by the local people. 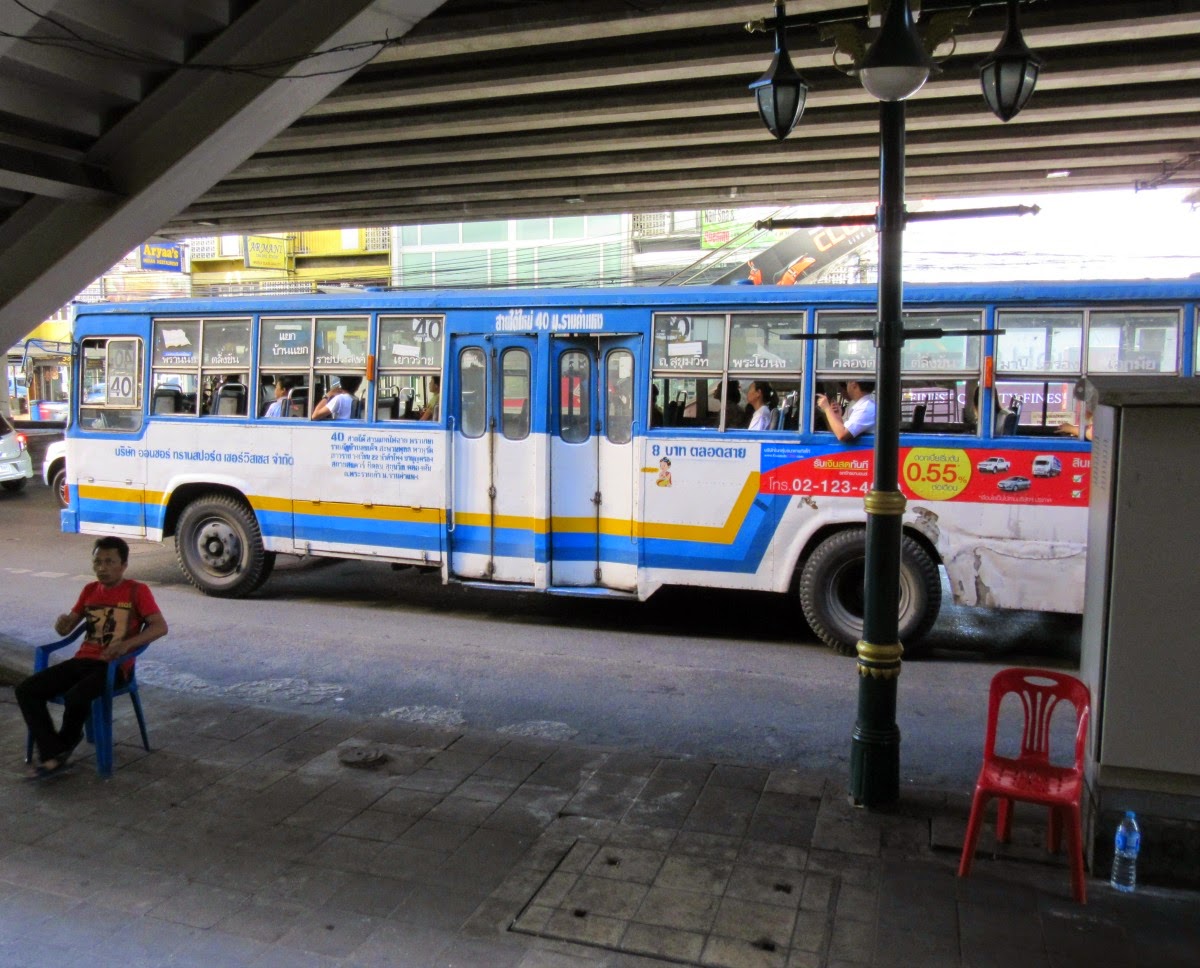 Taxis are everywhere and very easy to flag down.  While the cabs are metered, many of the drivers refuse to turn the meters on.  Before getting into a cab ask that the meter be turned on; if the driver won't do it, find another cab driver who will.  It's a funny way of thinking, but apparently many of the drivers would rather have no fare than have a metered fare. 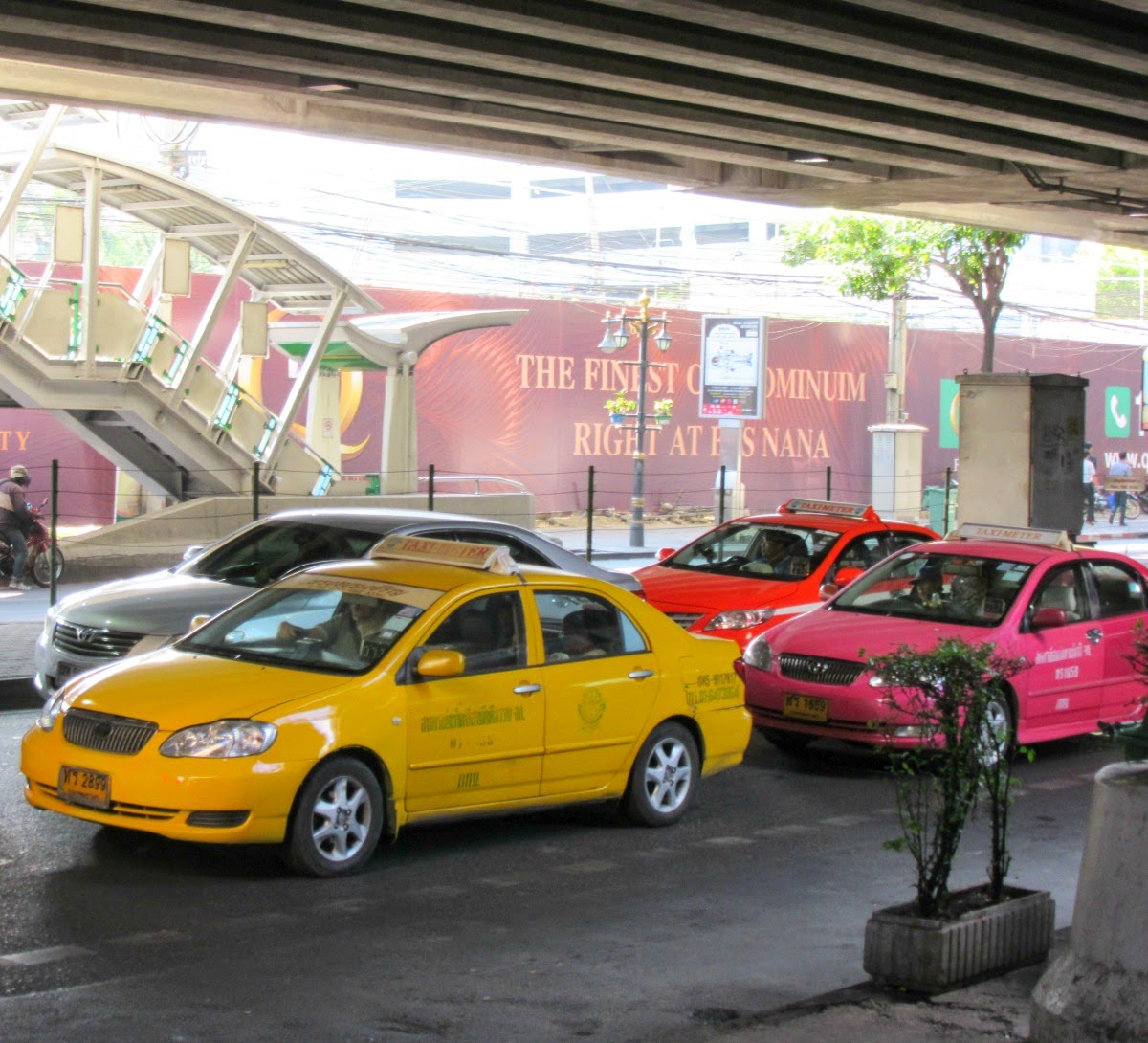 The BTS Sky Train is a safe, quick and efficient way to travel  in Bangkok.  We rode it all over the place.  The signage at the train stations are in both English and Thai making it easy to figure out how the system works.  In addition, there are maps at the stations which show the stops along the train routes.  The trains stop at Chatachak Market, MBK Mall, Siam Center and Siam Paragon, the Nana district, Lumpini Park and the Central Pier near China Town among many other stops.  It also connects to the line that runs to and from the airport.

If one is planning to ride the train often, purchasing a smart pass makes sense as it saves both time and money.  When the card runs out, the card holder can put additional money on the card in order to add more rides to the card.  The 50 baht purchase fee is refundable at the time the card holder turns their pass back in to the ticket office. 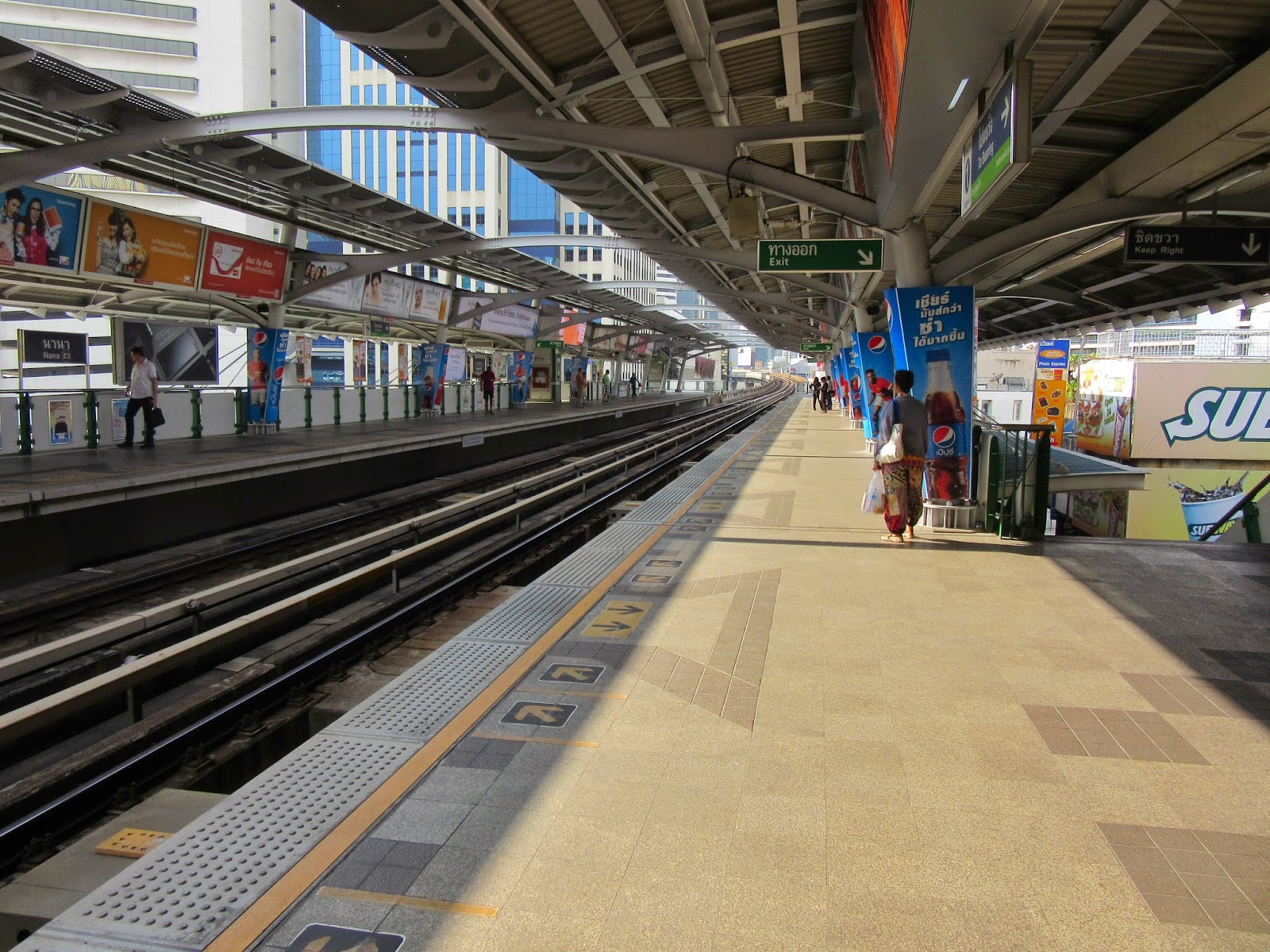 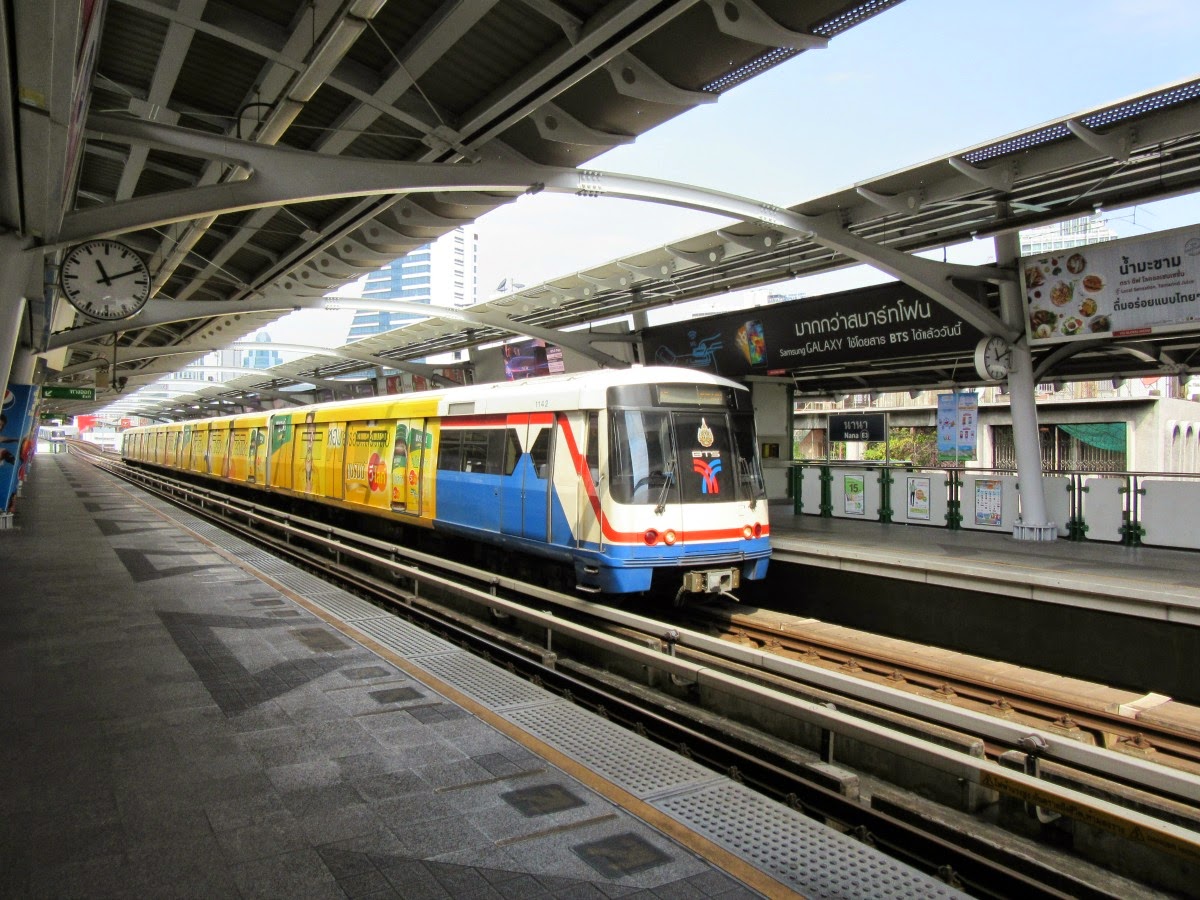 After we rode the train a few times, I grew confident enough to ride it alone and never had any problems finding my way.   It's a good thing because husband had no interest in the malls so if I wanted to go shopping, I had to be able to manage this on my own.  It didn't take long before I shopped until I dropped!