Ngoc Son Temple is a temple that was built on Jade Island in Hoan Kiem Lake in the 18th century.  The lake is located in Old Quarter of the city of Hanoi and is a favorite gathering spot for both local people and tourists alike.  To access Jade Island and the temple, one must cross Huc Bridge which means Morning Sunlight Bridge.  There is a small admission fee of 30,000 Vietnamese dong which is equivalent to approximately $1.50 USD. 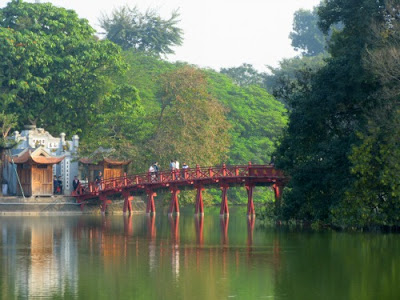 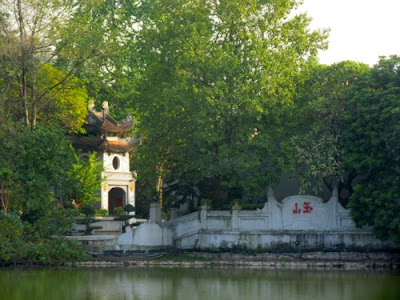 The temple is dedicated to Tran Hung Do who defeated 300,000 soldiers sent by Mongol Emperor Kublai Khan to invade Vietnam.

After crossing the bridge, one must enter through this gate. 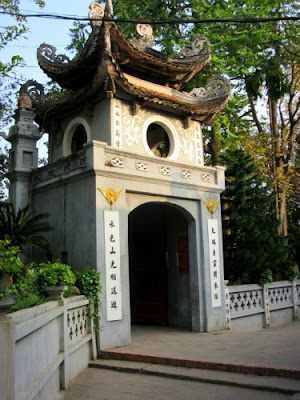 Once through the gate, this incinerator is to the left. 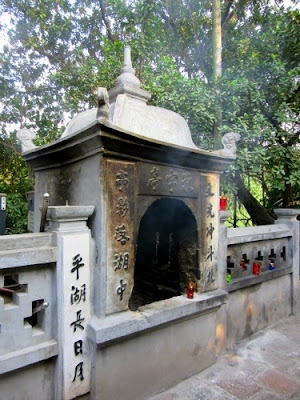 The island is covered with lush vegetation and the temple is surrounded by well tended gardens. 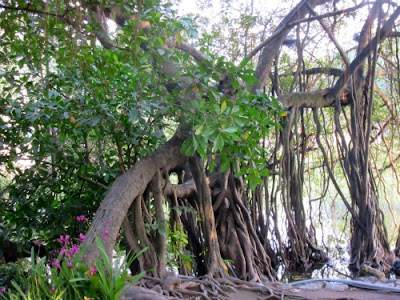 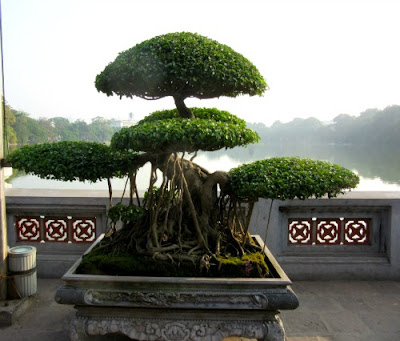 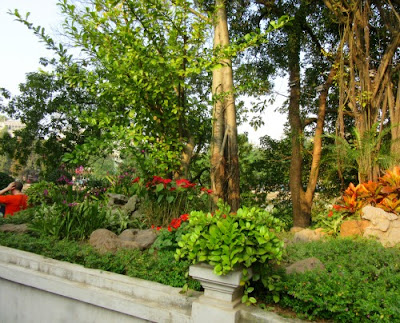 A pavilion where people can rest and enjoy the views is located next to the temple. 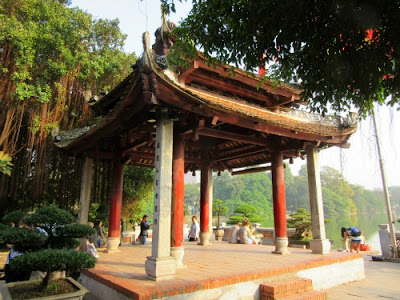 From this location it's possible to see Turtle Tower which is in the center of the lake and is linked to the legend of the Turtle God, Kim Kui, surfacing from the lake and asking Emporer Le Loi for his magic sword. 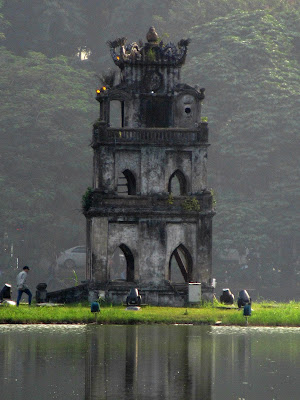 The resident cat of the temple.  I don't know how it was relaxed enough to sleep while crowds of people stepped over him/her while climbing the steps to the temple, but it was. 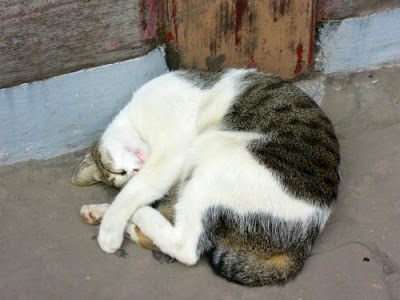 Inside the temple, there are ornate alters which are still used today for prayer and worship.  People leave offerings  of food, flowers and incense at the alters as part as part of their religious practices. 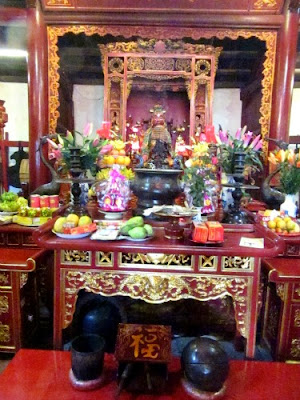 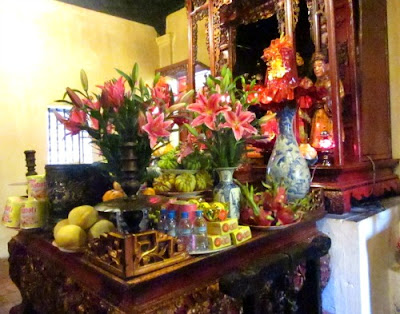 A few other items that are inside the temple. 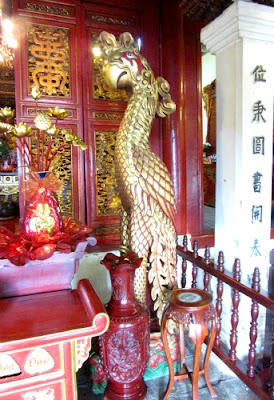 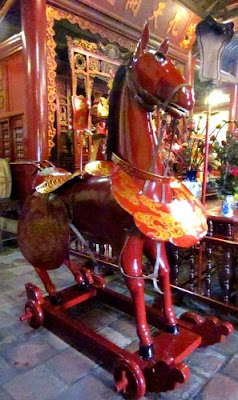 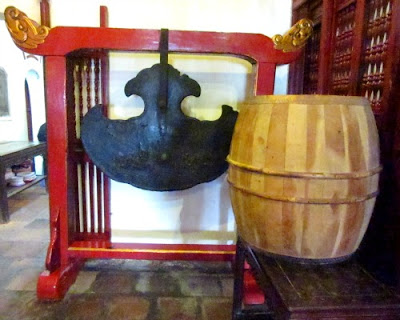 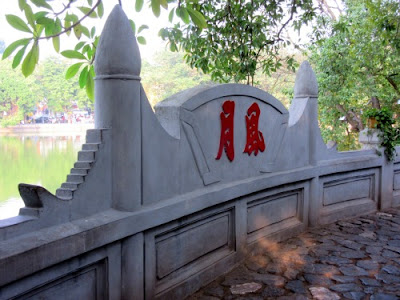 Another alter where people pray and leave gifts. 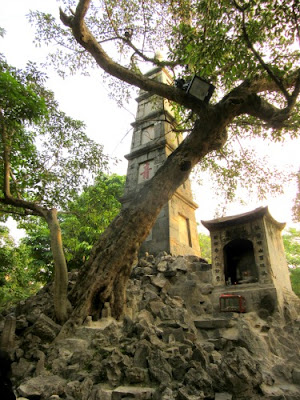 Ornately carved Taoist symbols surround the second gate of the temple.  This panel depicts the legend of the turtle god and the sword. 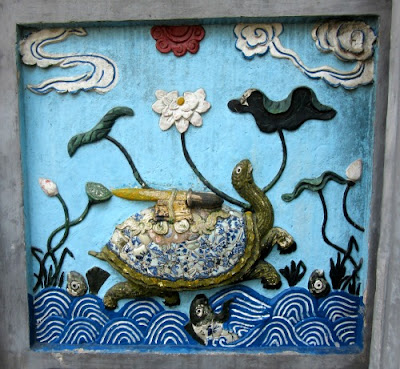 Others include this tiger which represents stability: 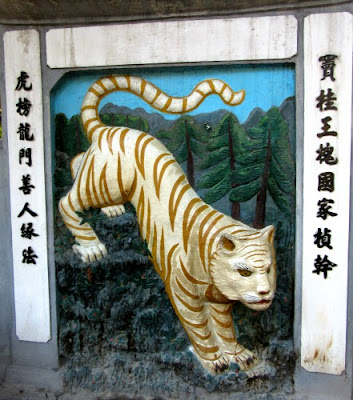 And, carp gazing at the moon: 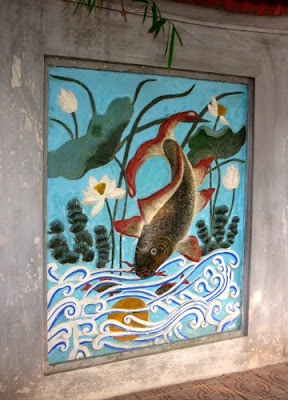 Touring the temple was not only interesting, but a relaxing way to spend the day.  I especially enjoyed the art work, sculptures and carvings that are on display for the public to enjoy.