To say that the food in Thailand is delicious would be an understatement of epic proportions.  The food is not only delicious, it is fresh and bright and exciting and much of it is exotic to this Westerner.  Fried bugs, anyone?

We ate at food courts, restaurants and from street vendors and I'm happy to report that we never had any food related issues or illnesses.  There are street vendors who keep their carts meticulously clean and others not so much.  To be on the safe side, we opted to purchase and eat food from those who had clean carts, fresh fish and seafood well packed in ice, vegetables that were still in their prime and who had a lot of customers.

Our running joke was that the woks were so hot that nothing would survive that experience anyway!

A favorite snack was chicken, pork or beef skewers.  Small pieces of marinated meat are placed on skewers along with a piece of pineapple and chili pepper and grilled over coals while you wait.  Yum. 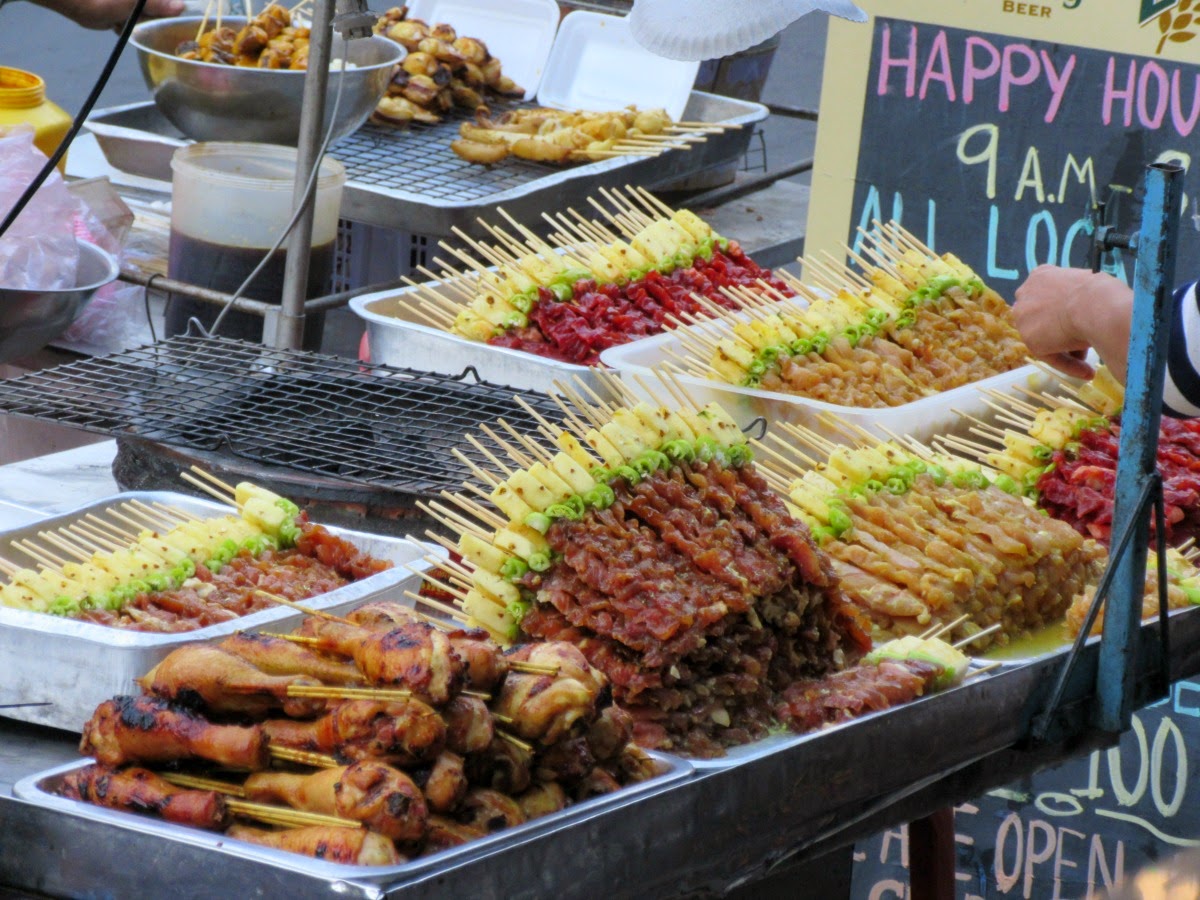 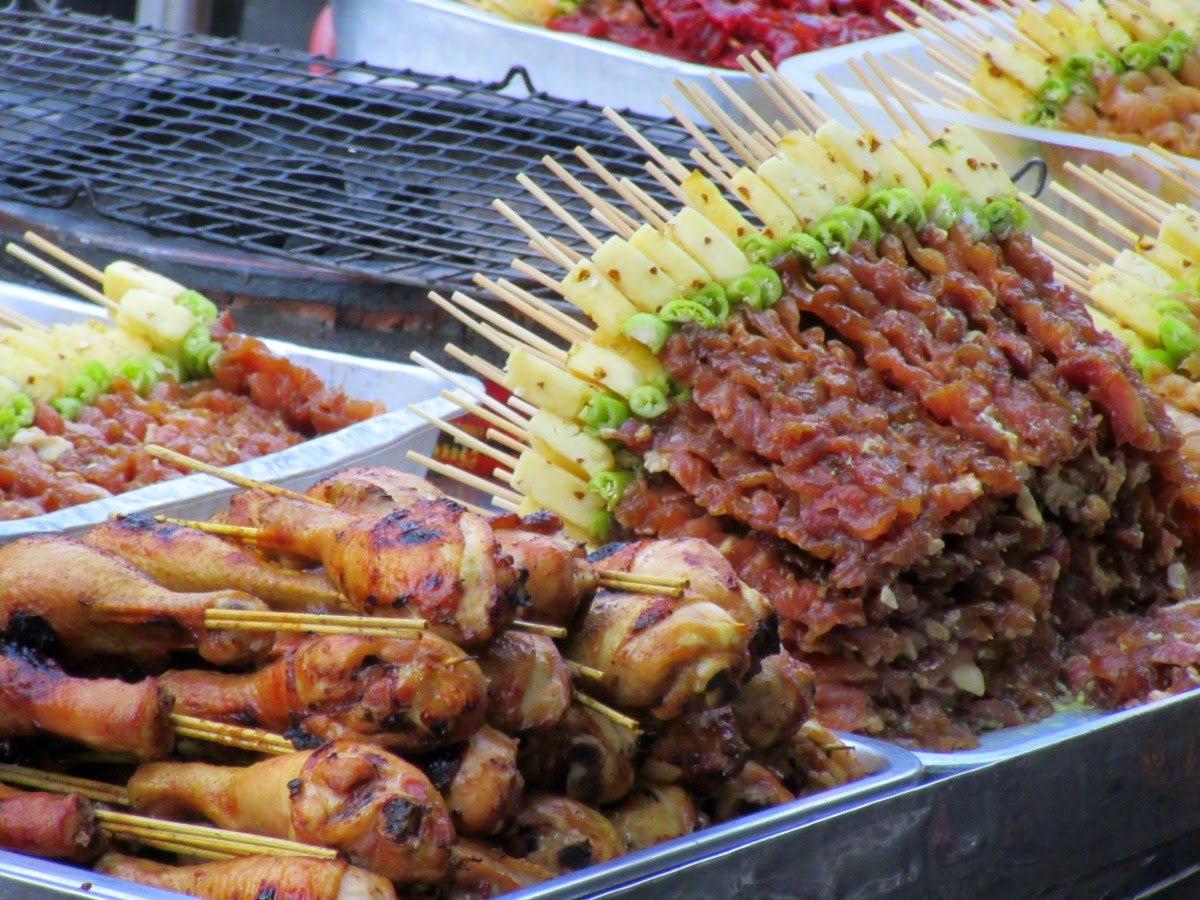 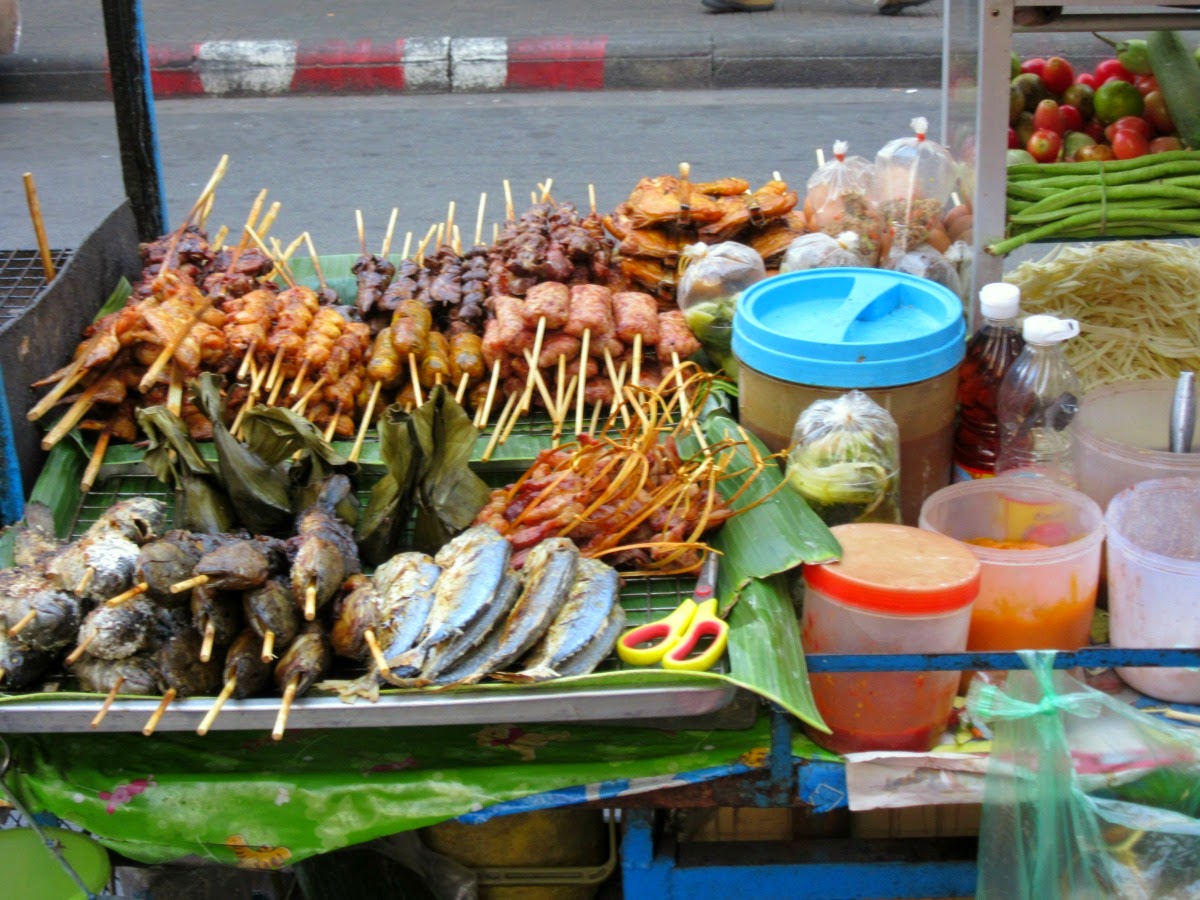 Containers full of hot coals glow eerily in the night: 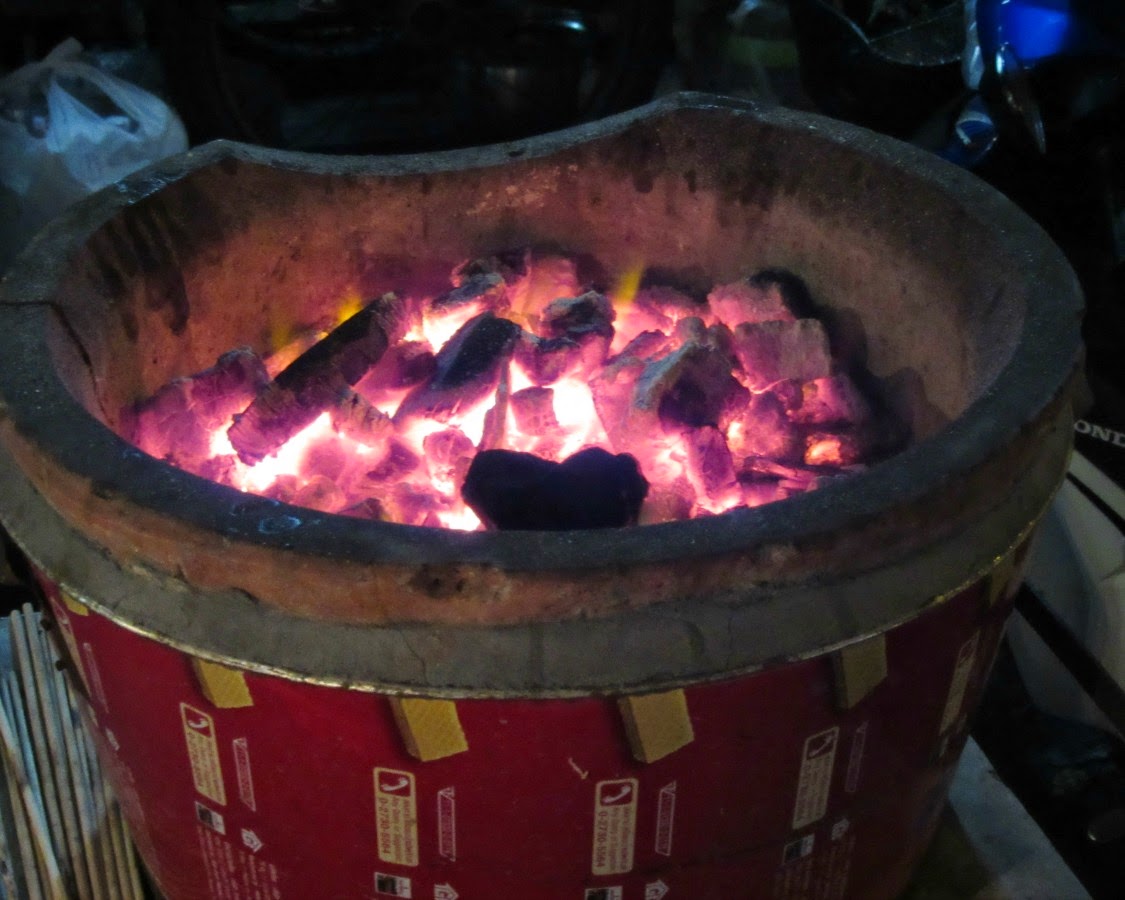 Examples of some of the street food we devoured - a wonderful meal can be had for less than 100 baht or $3.  Pad Thai soon became one of my favorite go to meals. 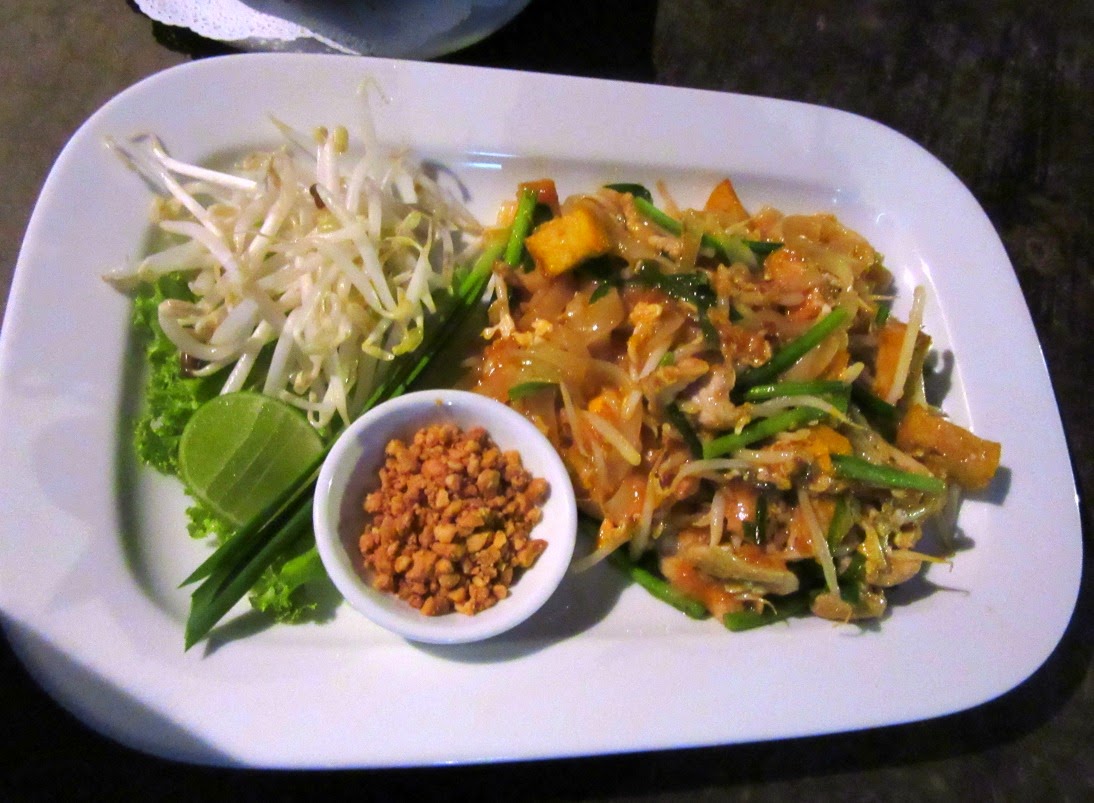 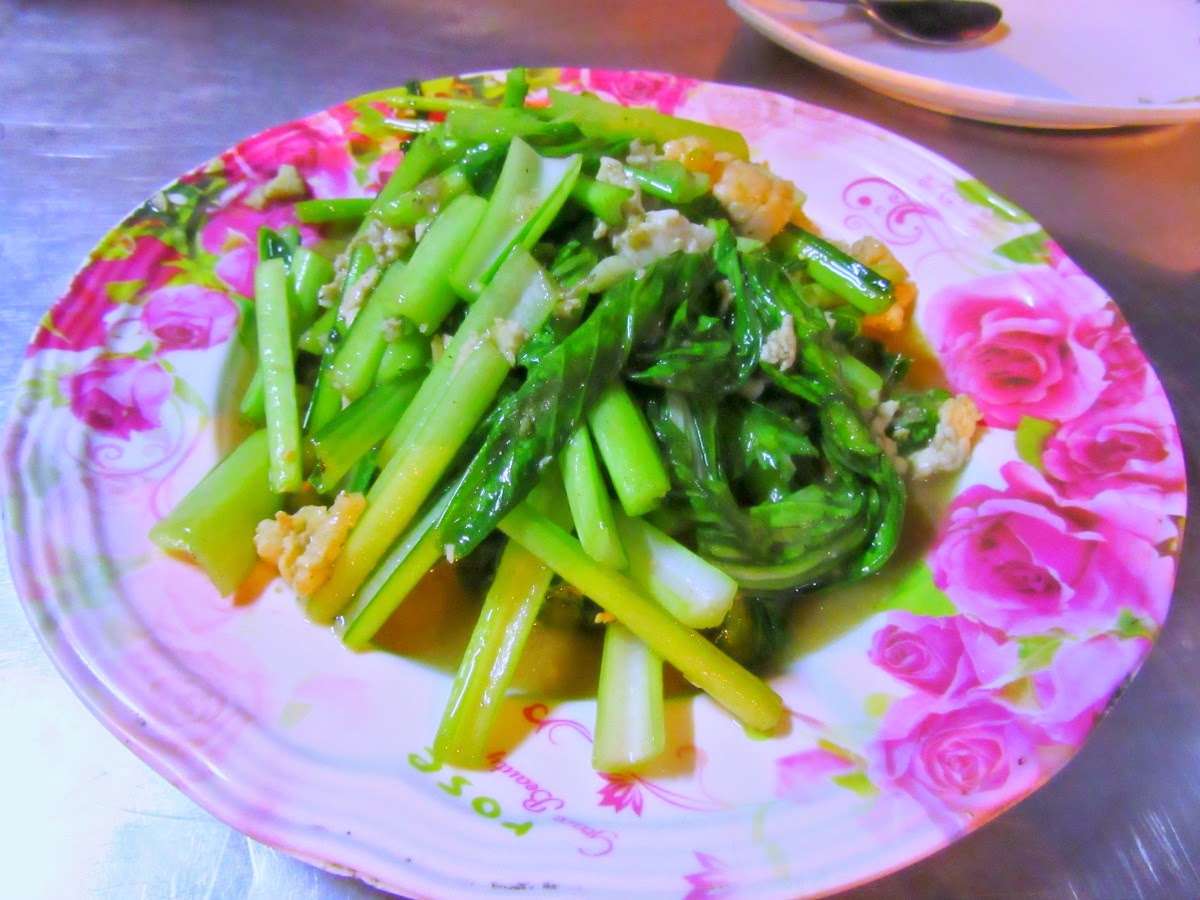 Catfish Laab - laab or larb consists of well seasoned cooked ground meat that is usually served at room temperature.  It is often served with fresh hebrs such as mint: 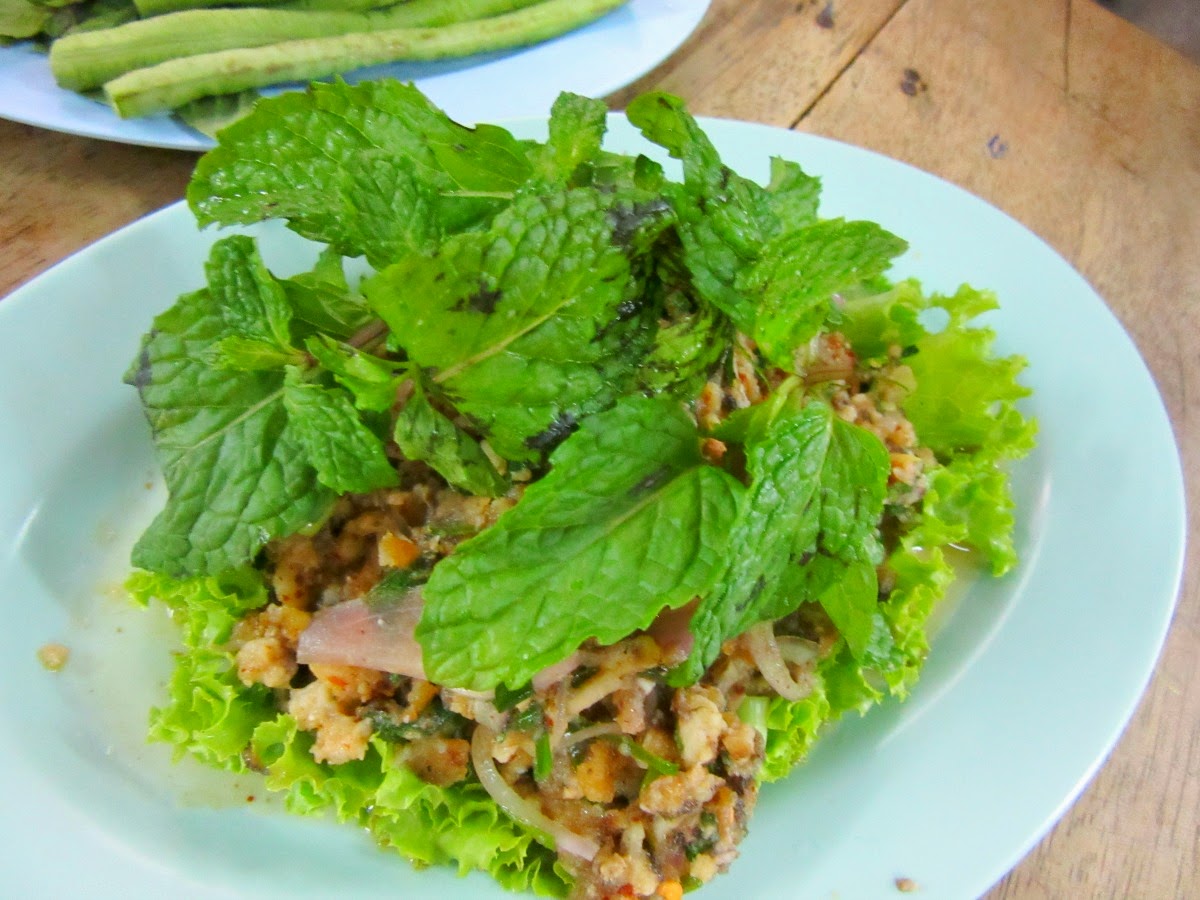 Cashew Chicken tends to be on the sweet side: 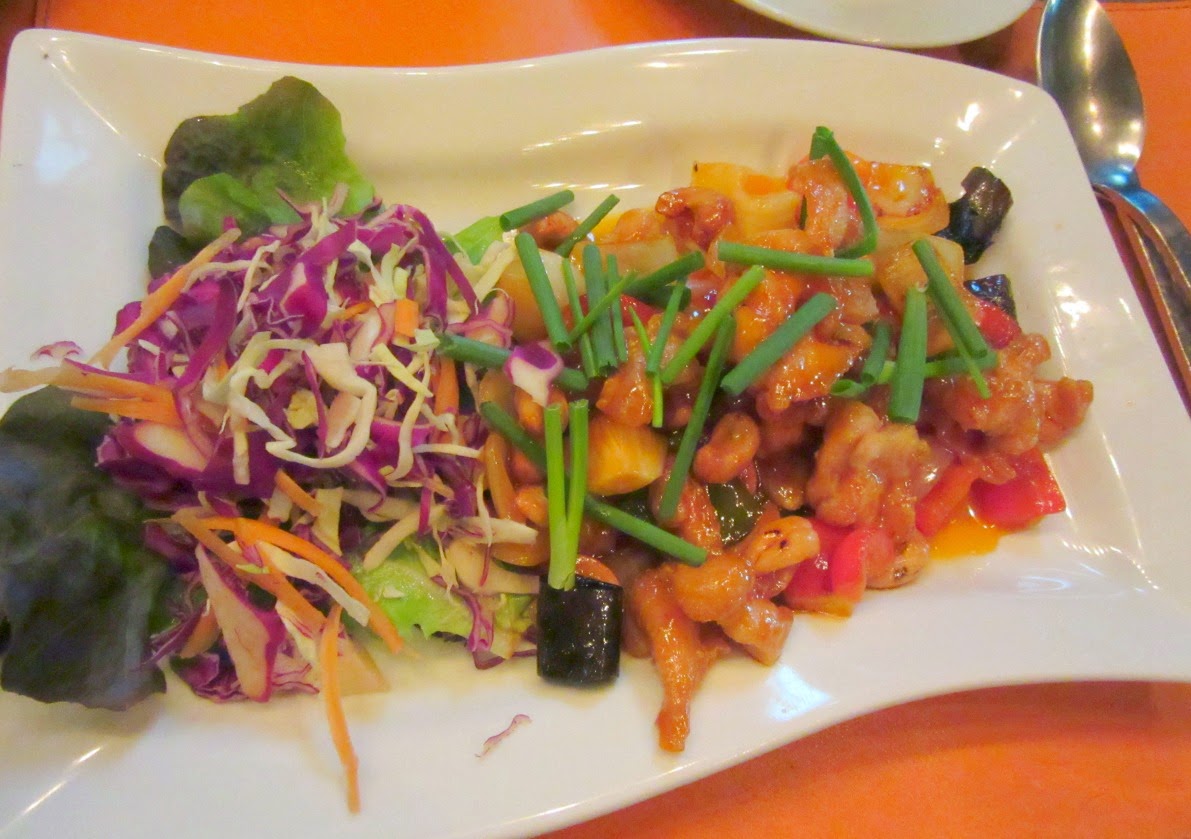 I don't remember what this dish was called but I do remember that it was tasty! 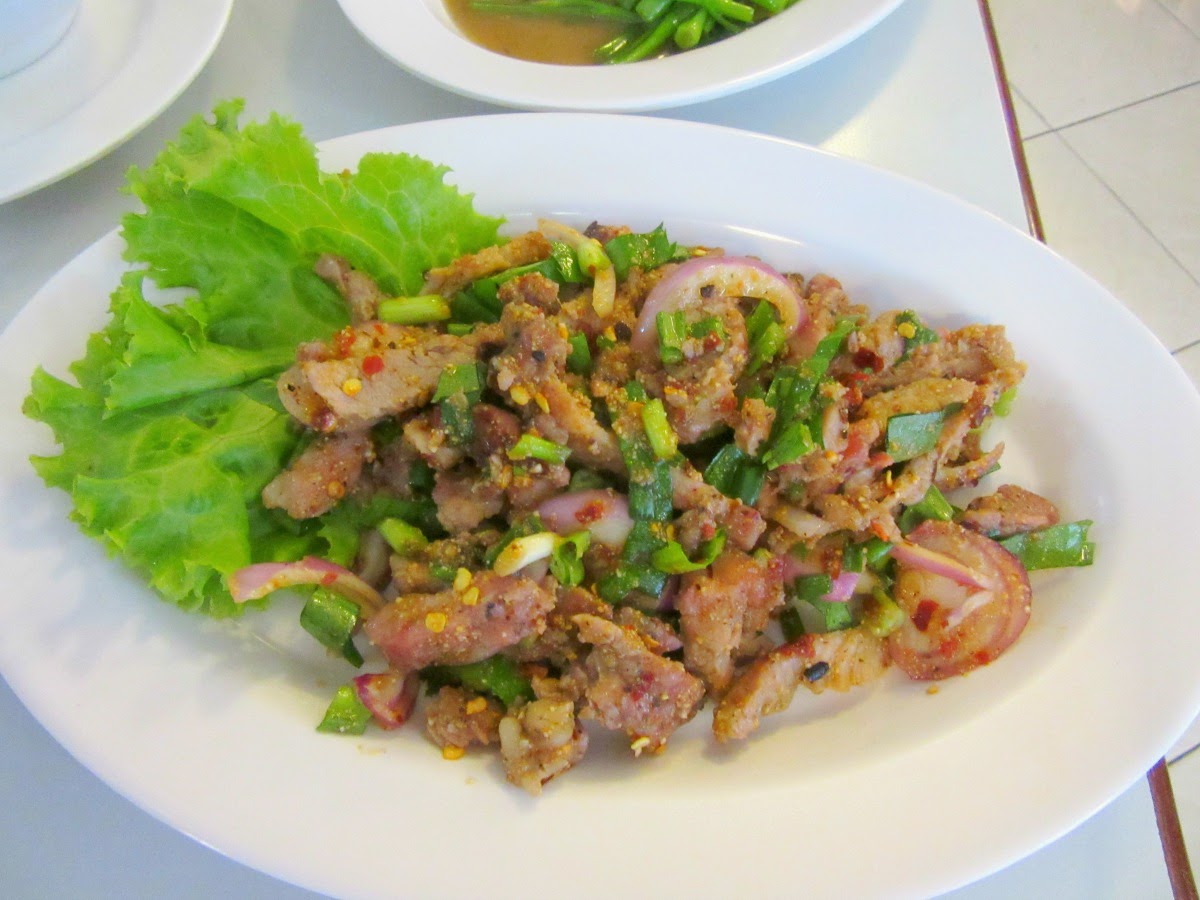 Tom Yum Soup was also a favorite dish of mine.  Spicy with a hint of lime, it definitely lives up to the "yum" in it's name: 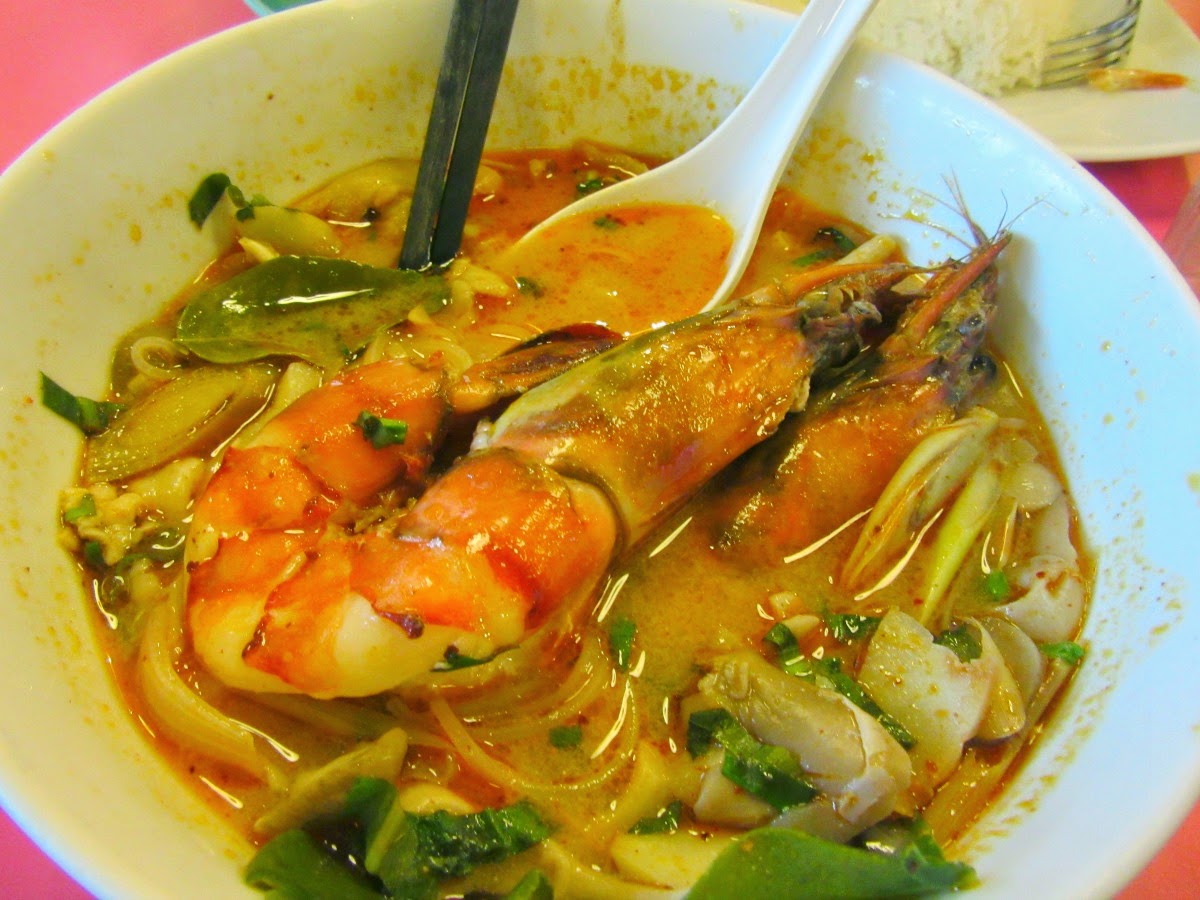 Another spicy dish is this Green Chicken Curry" 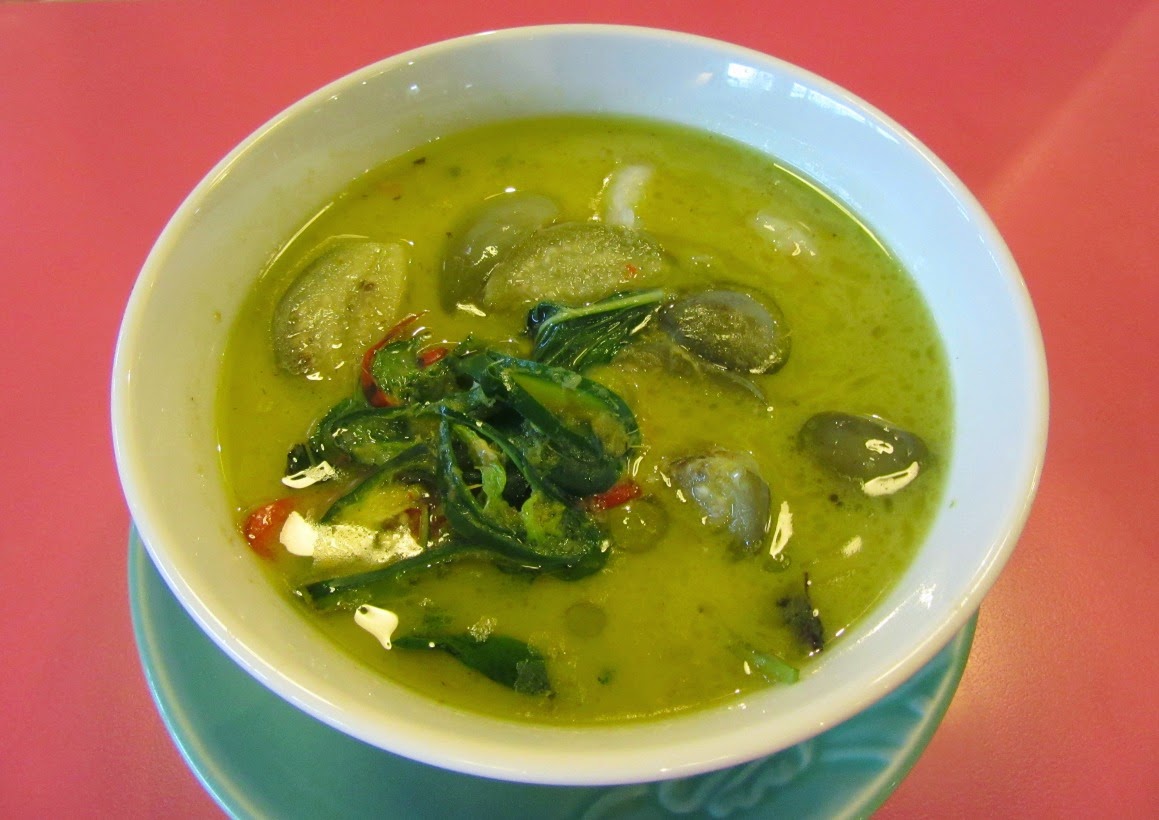 Morning Glory or Water Spinach is a popular green.  Crisp and light, not only is it healthy, but it tastes great too: 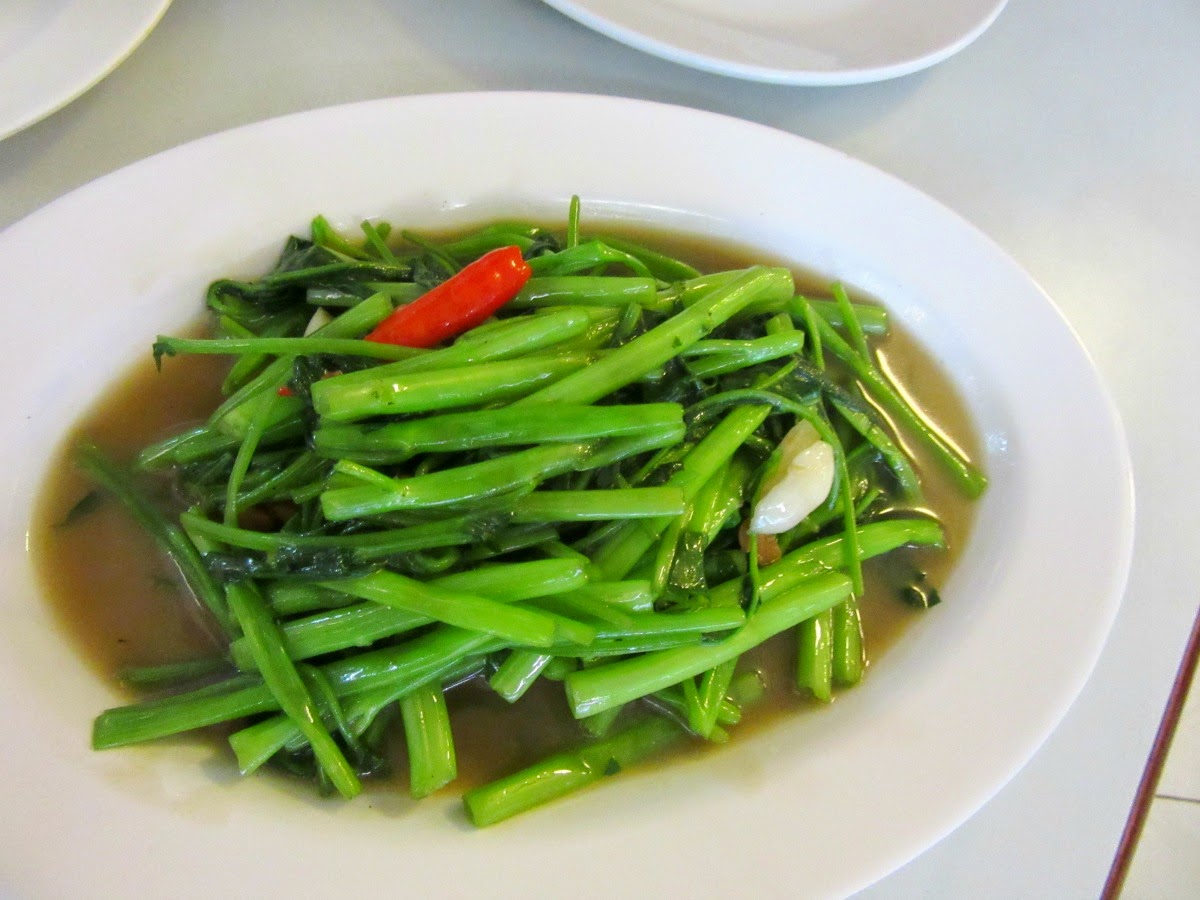 Grilled squid - we usually like squid, but found it to be rather dry and tasteless when grilled.  Maybe it was just us, because it was a very popular item and often sold out before the evening was over: 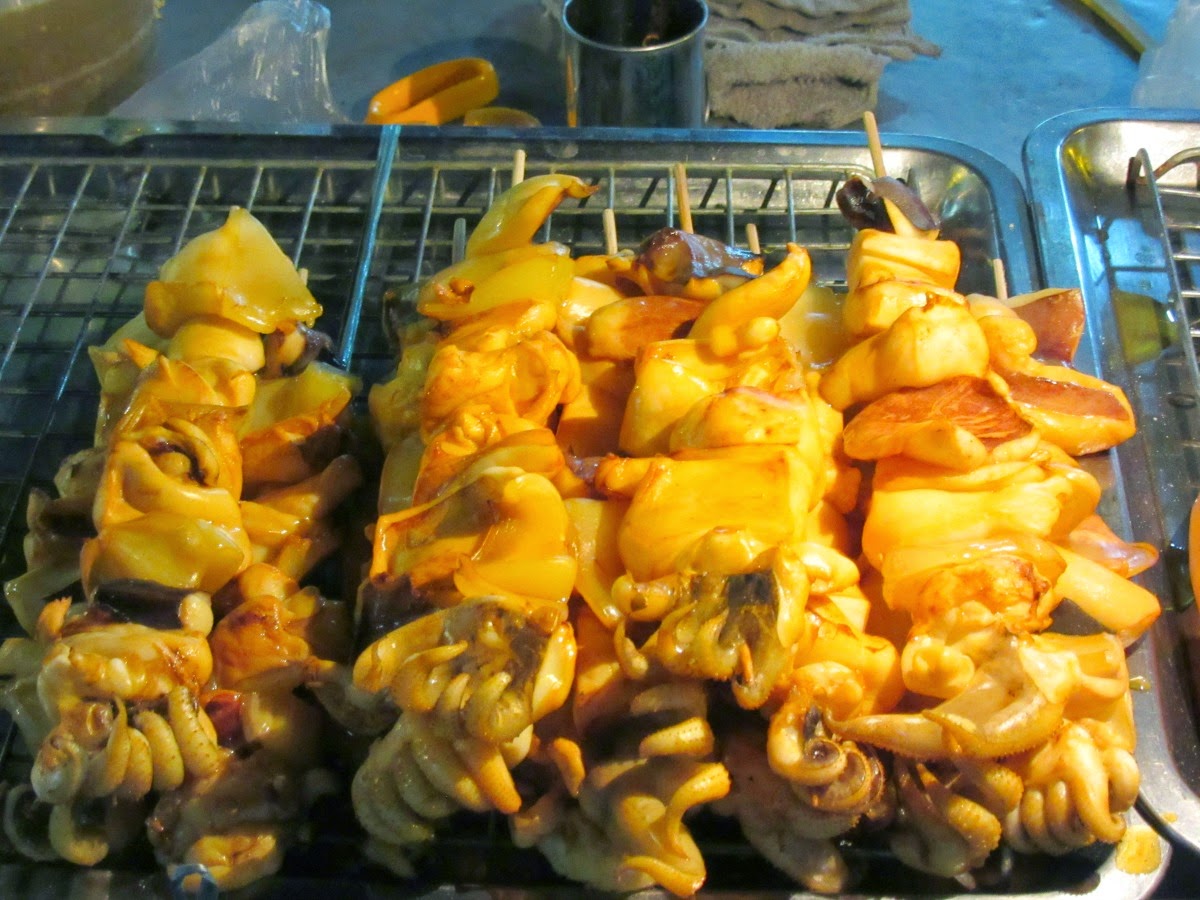 We meant to try the grilled fish, but our time in Thailand ran out before we had a chance: 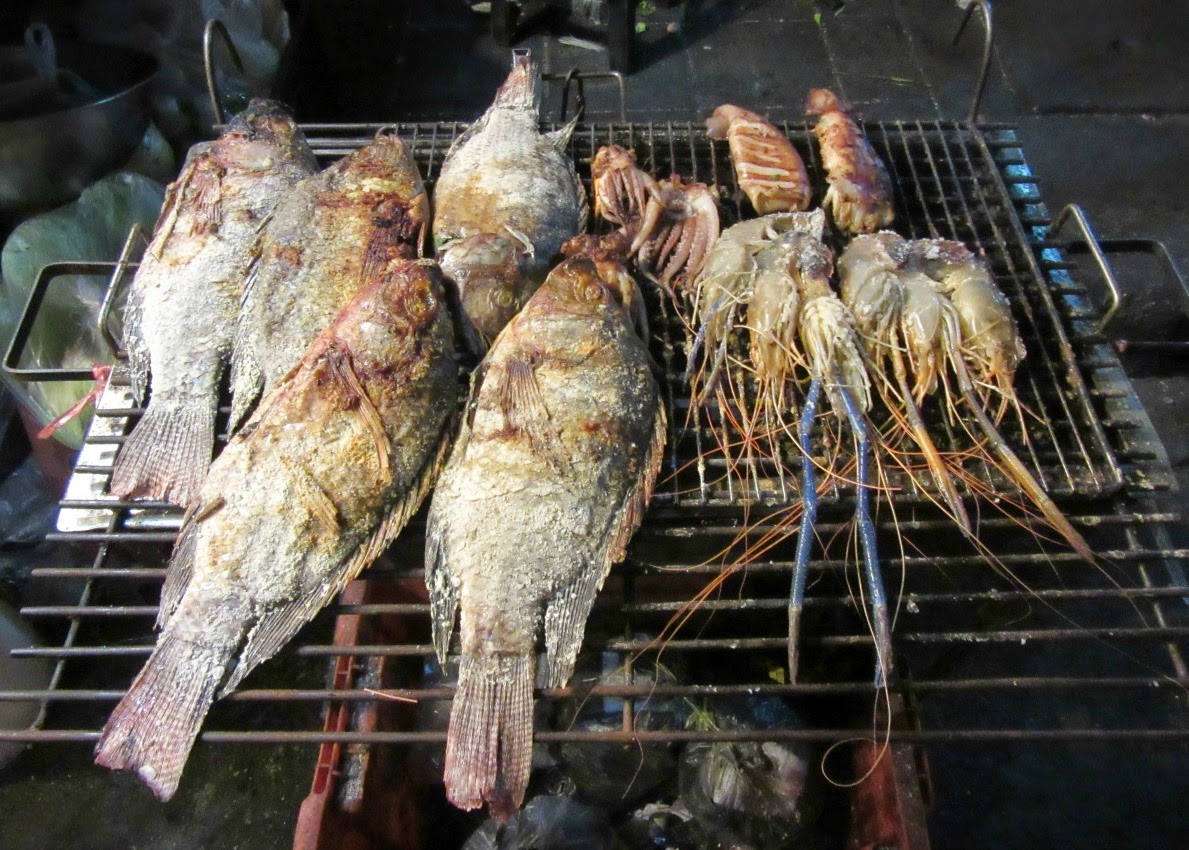 This vendor sold many different varieties of grilled mushrooms on skewers: 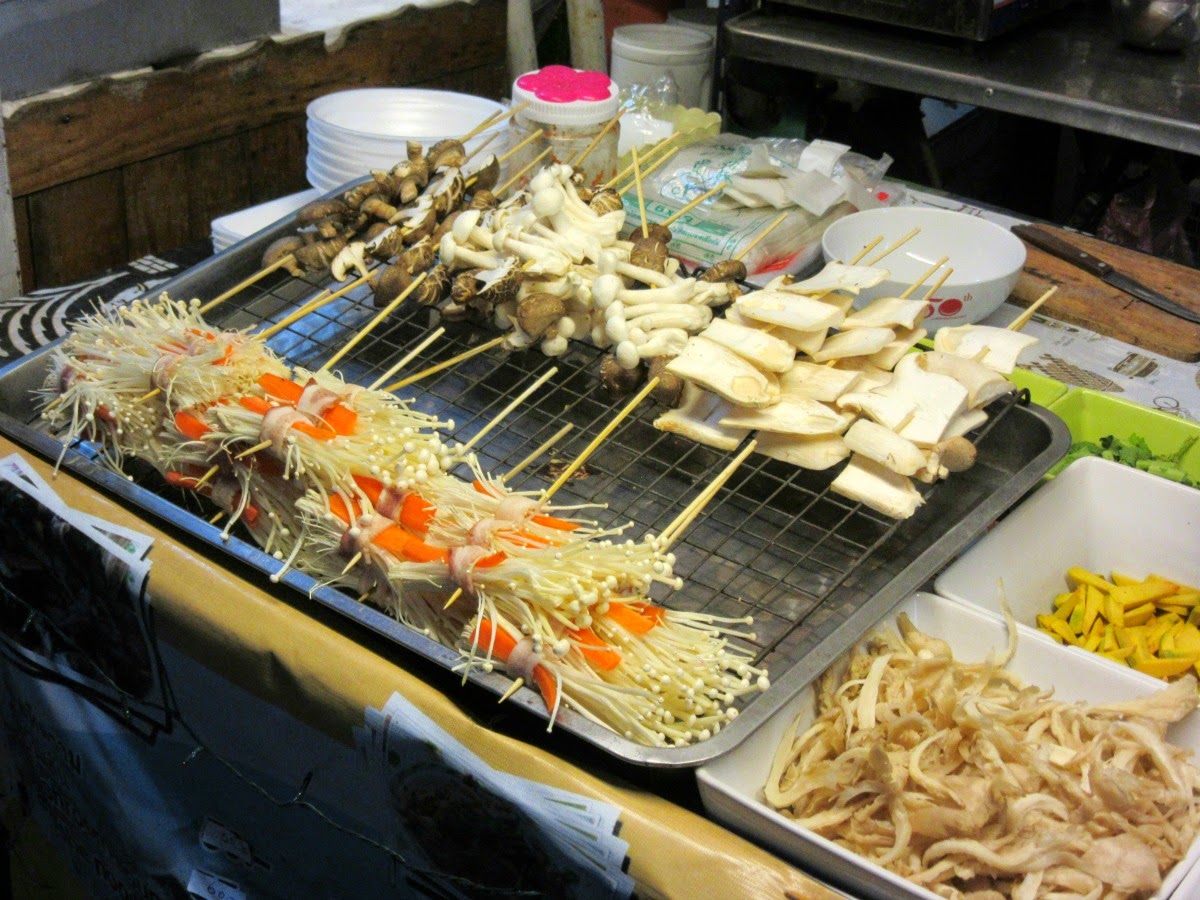 The waitresses at Mulligan's warned us that this fresh shrimp salad was spicy.  We assured them that we like spicy which seemed to please them.  It was indeed spicy and we ate every bite! 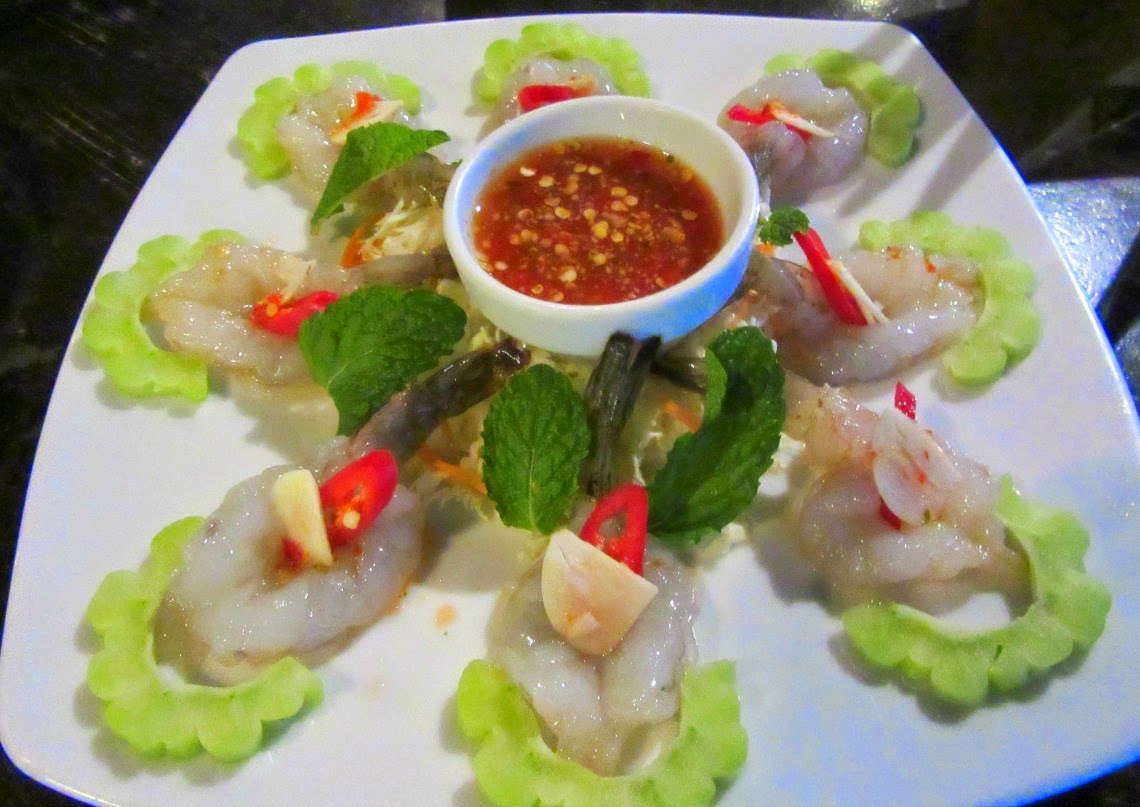 I'm not sure what this dish was, but I imagine it was hot.  Look at all those chiles - there's fish in there too: 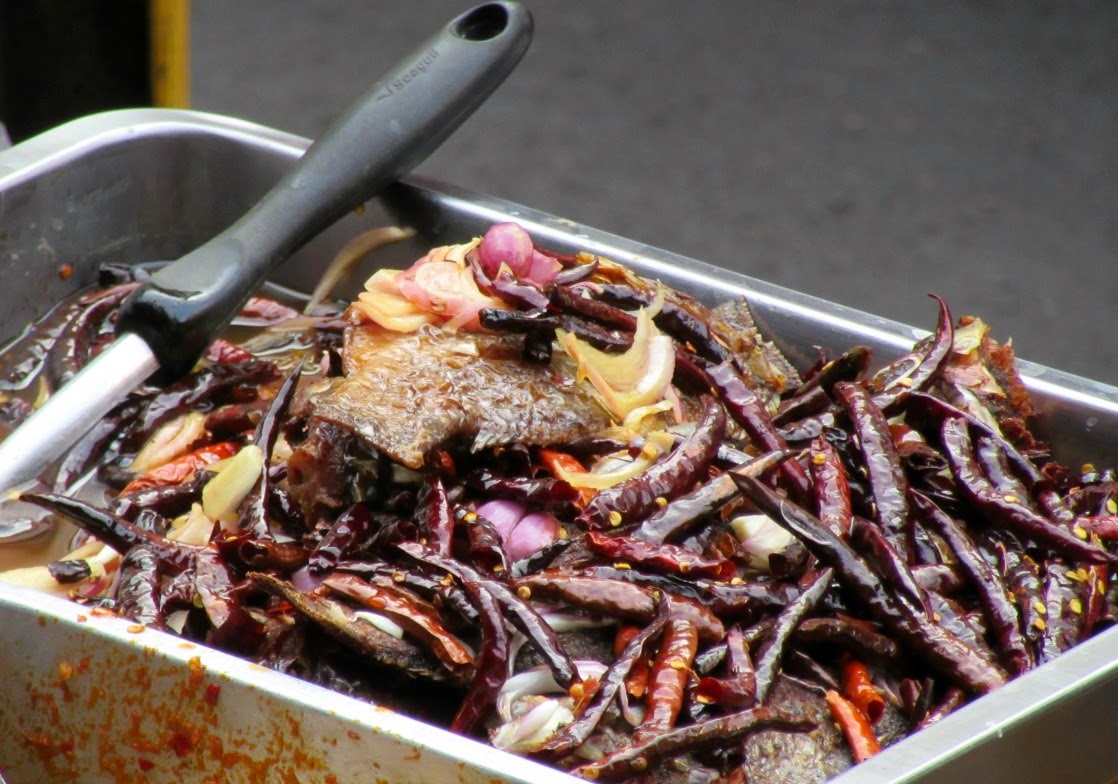 Remember earlier when I mentioned exotic?  I wasn't brave enough to try the chicken feet, but they are a popular dish.  Most often they were deep fried but sometimes they show up in soup: 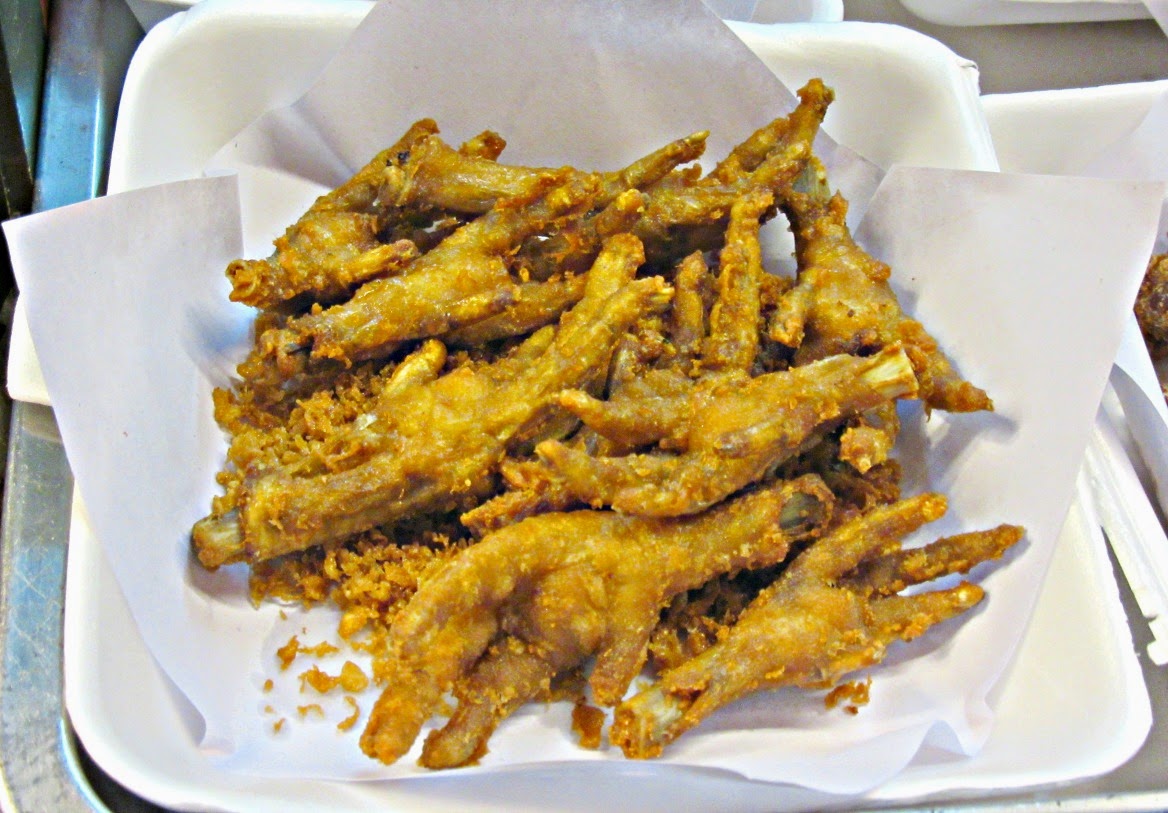 When it comes to exotic, the chicken feet are actually quite tame.  I'm not sure that there will ever come a time that we're ready to try lung soup or intestines or some of the other things served here.  While we consider ourselves to be fairly adventurous when it comes to food, there are some things that are difficult to get past.  Of course, much of this has to do with what people grow up eating; I'm sure we eat things that others wouldn't want to eat due to their upbringing.  Still hoping to work up the courage to try the fried bugs someday though!