During our stay in Siem Reap, we hired a tuk tuk driver to take us to the Angkor Archeological Park which covers 98,842 acres and is home to an ancient stone city of the Khmer Empire that includes the famous Angkar Wat temple.  Built out of sandstone during the first half of the 12th century, Angkor Wat was declared a world heritage site by UNESCO in 1992 and is a marvel of human engineering that sits on 400 acres of land. The outer wall of the temple is 3,360 feet by 2,631 feet, measures 15 feet in height and encloses 203 acres.  The temple itself features several galleries, halls, pavilions and five towers the highest of which soars to 213 feet above ground.

Angkor Wat was built as a temple and capitol city for the ruling king of the time, Suryavarman II.  At the peak of it's reign, it is believed that the Angkor complex was home to over 1,000,000 people. Twenty seven years after his death, the temple was taken by the Cham, enemies of the Khmer.  Towards the end of the 12th century, it gradually evolved from being a Hindu center of worship to one of Buddhism.  It is still actively used for worship today.

Touring the area, I couldn't help but be taken with how these ancient people created such advanced, elaborate structures and intricate artwork without the aide of modern tools and equipment.  It was quite humbling to think of them producing such beauty with nothing but their hands and stone tools. 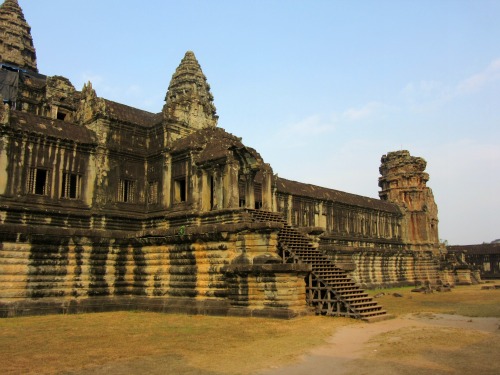 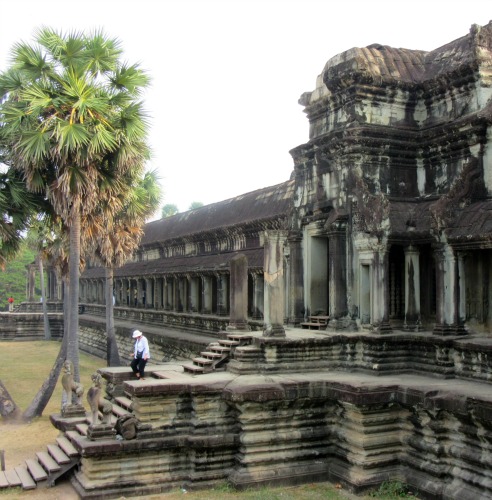 Angkar Wat is also surrounded by a moat 620 feet wide: 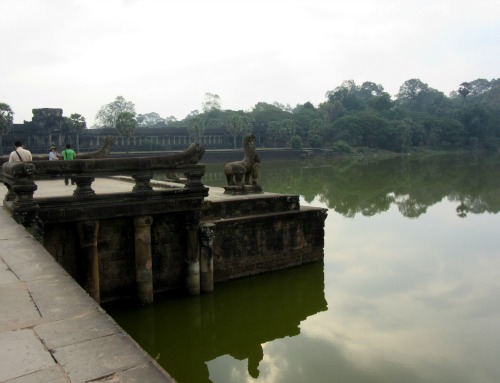 One of the many hallways inside the temple: 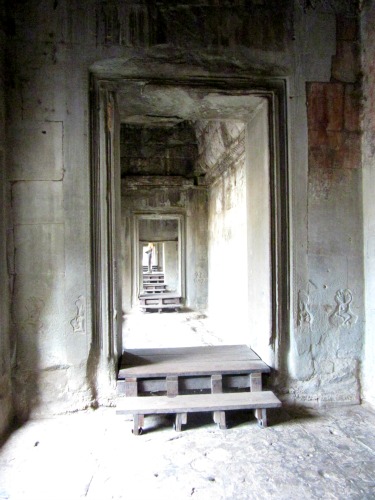 Known as libraries, the true purpose of these buildings which flank the temple are unknown, although it is thought that they functioned as religious shrines. 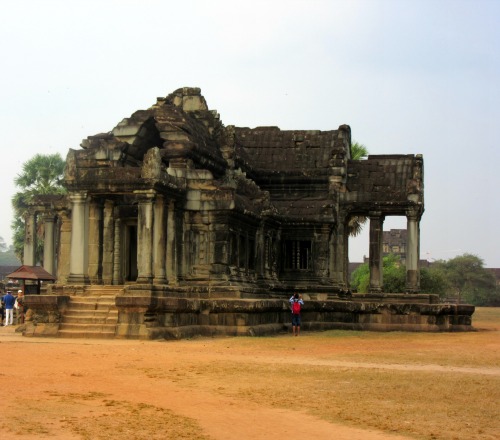 Amazing bas-relief carvings in the sandstone tell the history and stories of the Khmer people.  The detail is incredible.  I've only shown one small photo here but this artwork covers the external wall of Angkor Wat with 12,000-13,000 such scenes depicting the myths, battles and every day life of the Khmer. 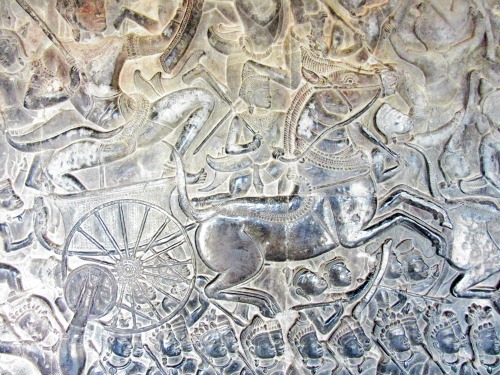 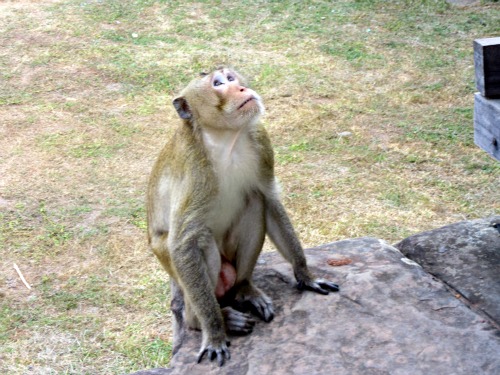 After we were finished touring Angkor Wat, our driver took us to several other temples located withing the Angkor Archeological Park.  As we entered the next temple area, we were greeted by a row of these sculptures: 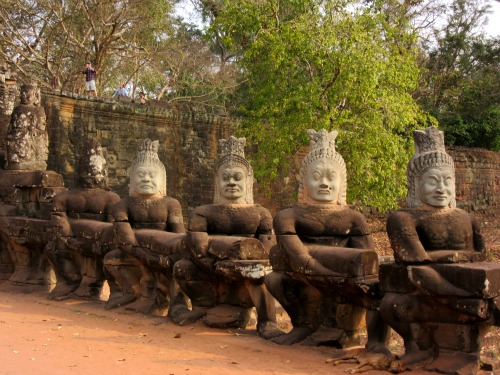 Note the faces carved into the towers of this temple which is known as Bayon: 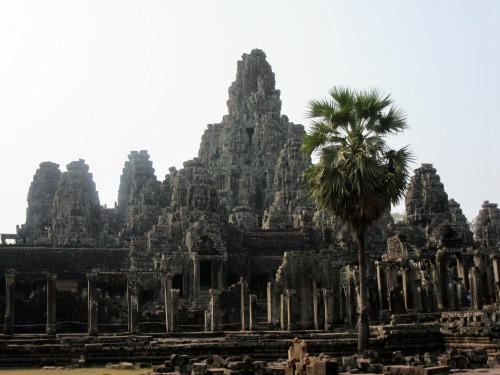 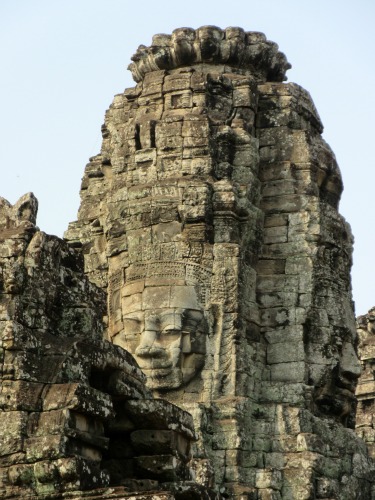 The corridors in the temple are maze like.  We often found that we had gone down one passageway only to emerge in an area we'd already explored. 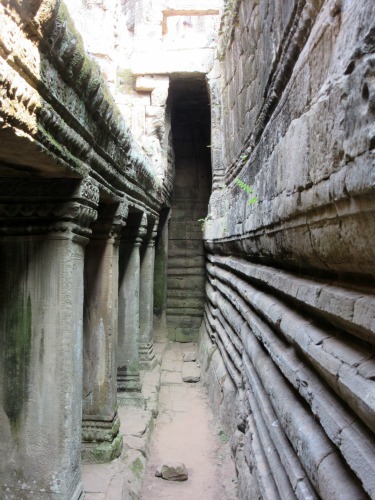 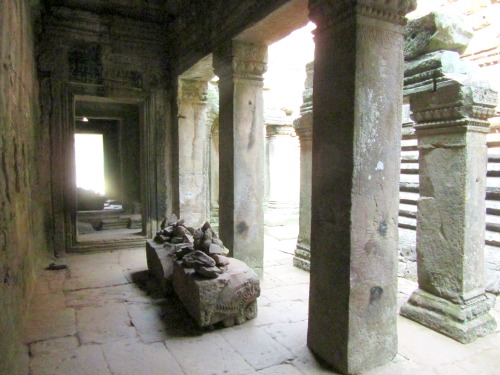 There are many man made reservoirs in the park.  It is not known if their purpose was spiritual, as a water supply, for agriculture or a combination. 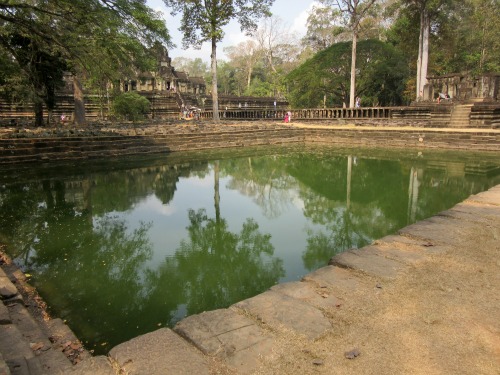 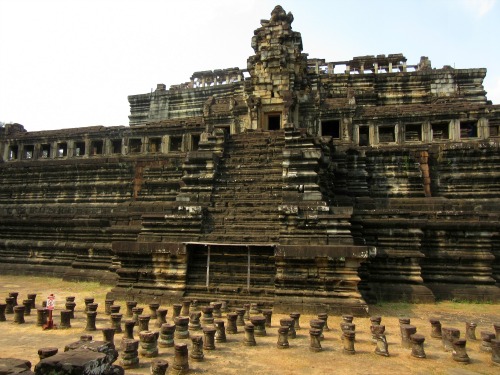 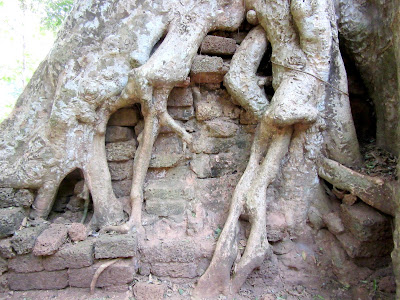 While this archway remains standing, the structure that was on the other side is nothing more than a pile of stones: 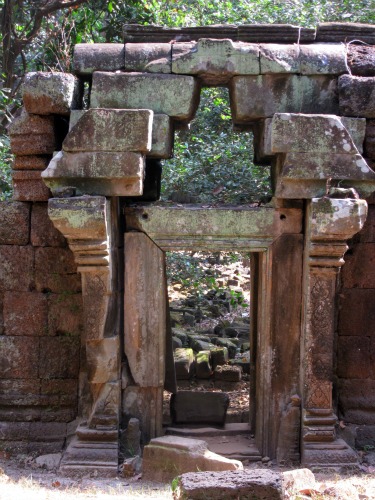 We climbed several of these types of stairways during our visit.  The treads are much narrower than the risers making navigation of the steps a challenge to say the least! 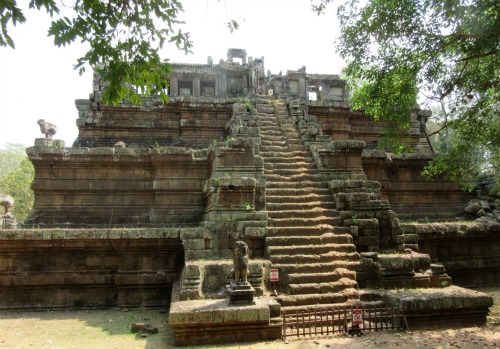 This elephant statue is missing his trunk.  Over the years, most of the statues and sculptures in the park have been lost to looters.  Much of the sculptures now found in the park are reproductions. 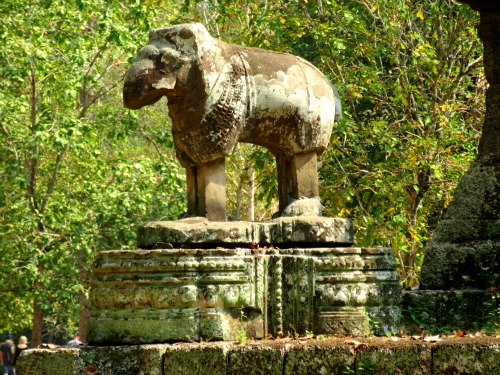 Remains of a small structure, these ruins were in the jungle away from some of the more popular temples.  It was quite peaceful and quiet here and nice to be able to get away from the crowds for a bit: 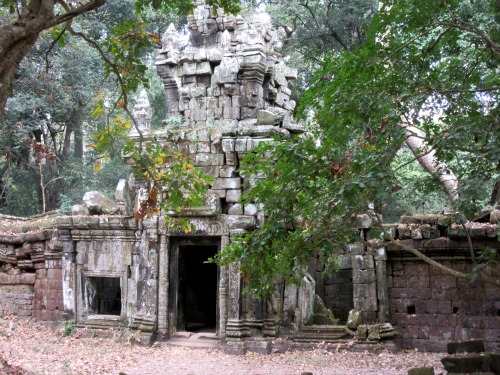 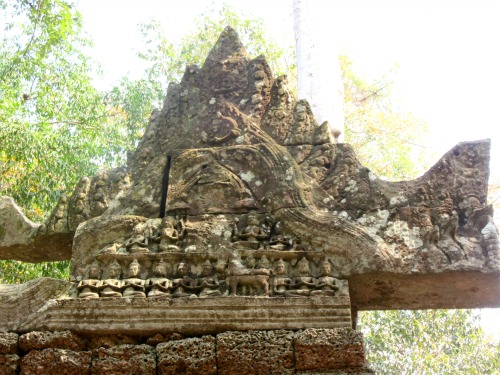 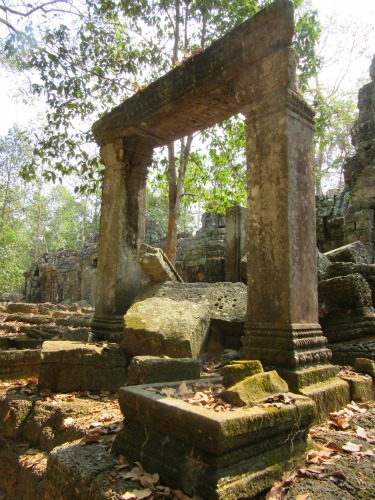 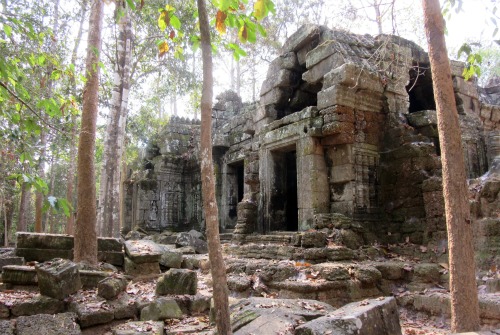 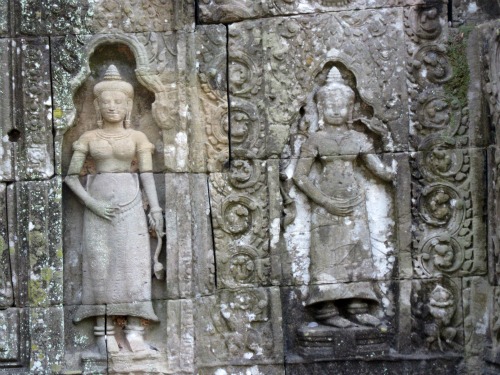 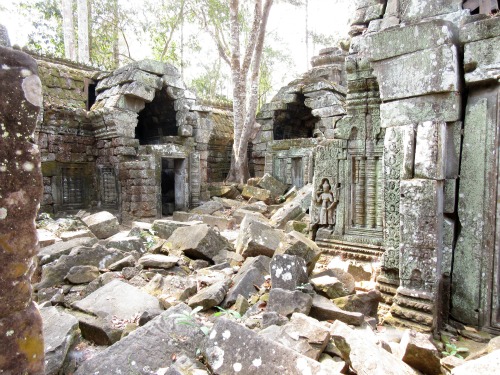 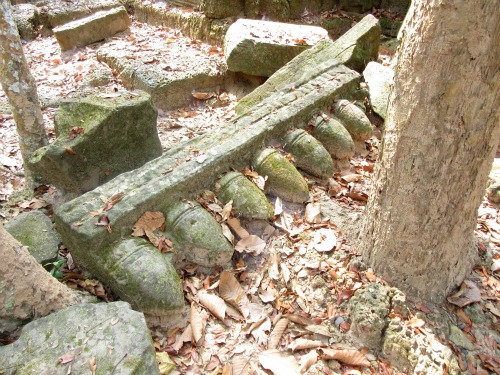 The forest reclaims itself - in many places trees and roots are growing through and over temples and walls: 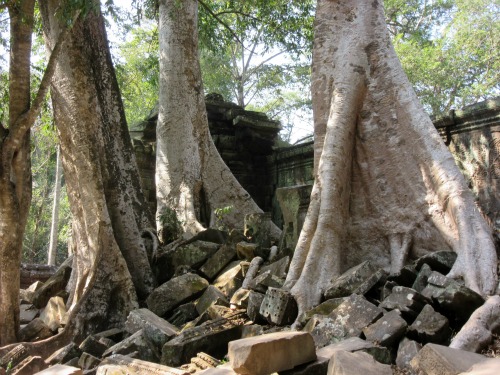 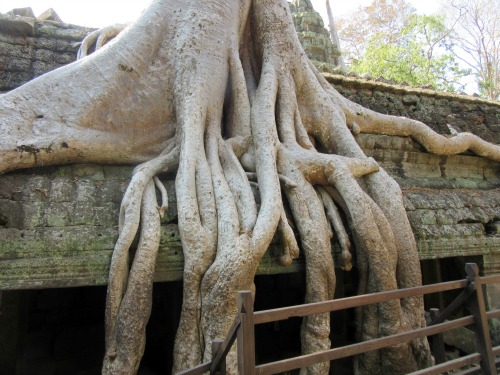 Much of the temple complex was undergoing restoration work until the 1970's when these efforts were abandoned during the Khmer Rouge era.  Fortunately, the temples survived the war relatively unscathed and restoration work resumed in 1986.

Today, the greatest threat to the temples is from the very tourists who come to visit causing damage to the temples due to the sheer numbers of people in the park.  Graffiti and other forms of vandalism and straining the limited resources of Siem Reap with demands on the water, sewage and electrical systems are cause for other concerns .  Further complicating matters is that Cambodia is one of the poorest countries in Asia and not likely to be willing to give up the income that tourism provides.  To date, the influx of tourists (two million per year) has caused relatively little damage, but in the future, UNESCO and the Royal Government must find ways to successfully incorporate tourism that will protect both the temple complex and the resources, charm and culture of the town of Siem Reap from being further compromised.