Here we are on our last day in Hanoi.  I thought I'd write one final Hanoi piece that includes random photos I took as we wandered the streets and took in the sights during the week we were there.

Beer corner in the Old Quarter of Hanoi.  This is a well known spot among the young backpacker community.  Beer is cheap and it flows like water here.  Each night, the streets are closed to vehicle traffic so that people can walk about without dodging motorcycles and cars.  It becomes wall to wall people until 11:00p.m. which is when the bars must shut down or move their operations indoors. 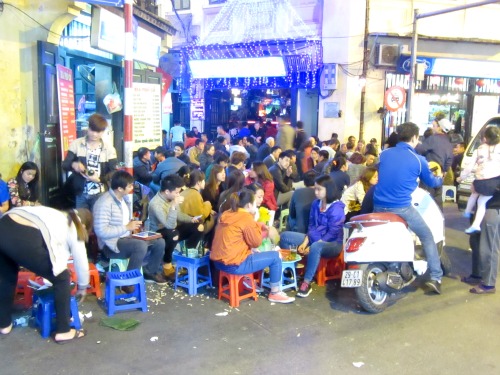 More of the unlikely cargo transported by motorbikes and bicycles.  I guess I have a kind of fascination about the surprising things that can be carried in this manner. 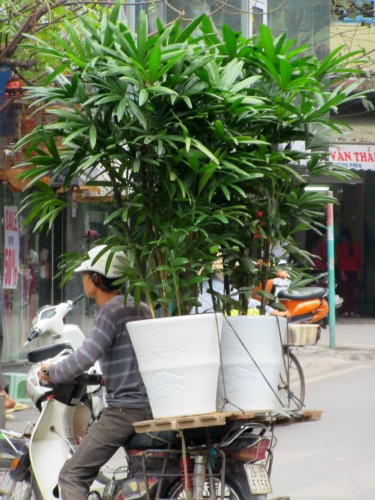 Woman carrying a balancing pole.  She has everything she needs in the baskets (including a small cook stove) to set up her small food business just about anywhere. 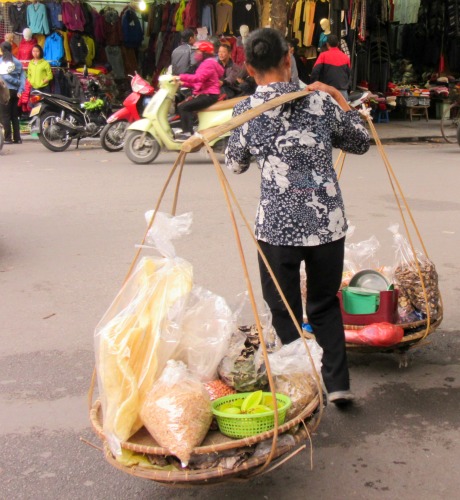 The gates to the old city were built in 1010 by the Ly dynasty and remained the seat of the Vietnamese Court until 1810 when the capitol was moved to Hue.  The area inside the gate was reserved for the king and his court.  The walls around the city were surrounded by a moat and access to the city was through one of the four gates.  Today only one gate remains at the end of Hang Chieu Street. 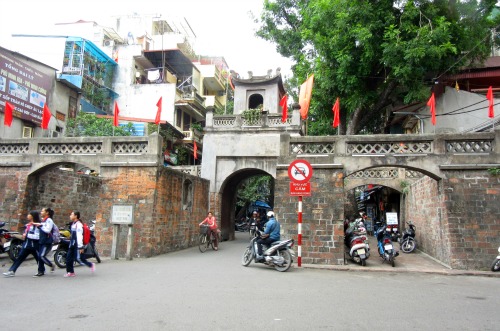 After the Nguyen King handed over the city to the French in the late 18th century, the ancient Bao Thien pagoda was demolished in 1886 to make way for the construction of St. George's Cathedral.  Masses are still held each day at this location. 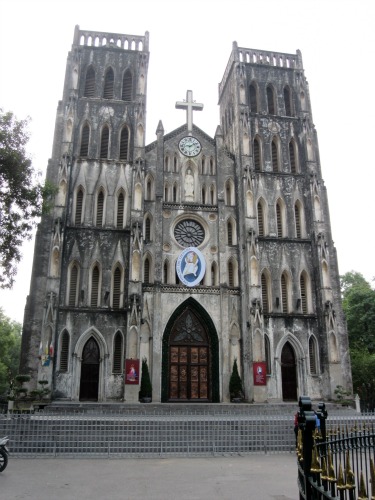 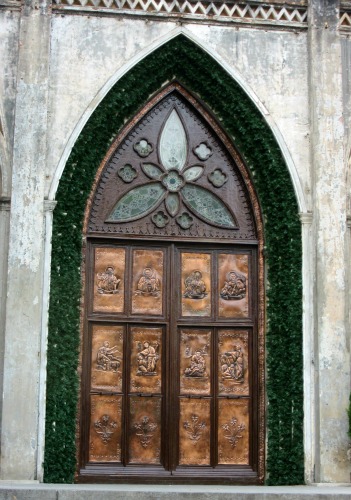 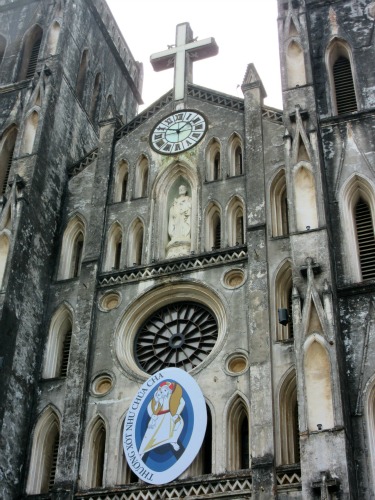 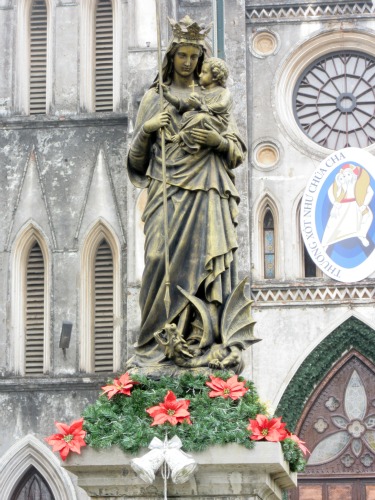 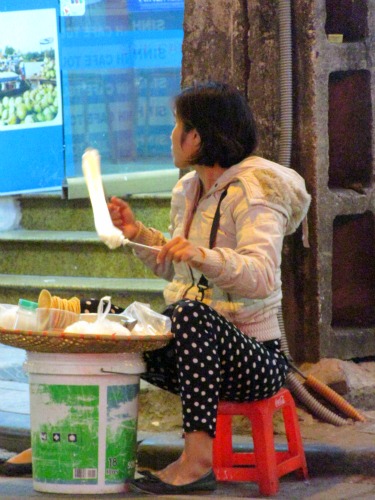 Fast food blight.  Just like McDonald's, KFC is well established in Hanoi as is Burger King. 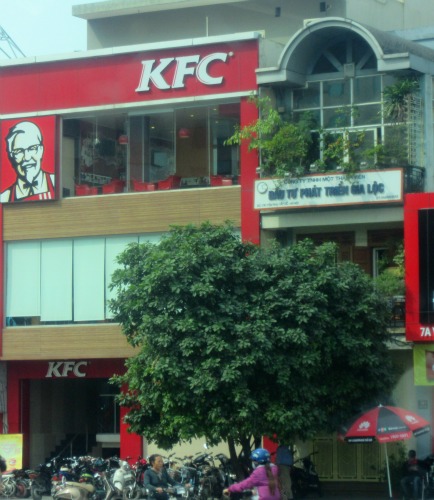 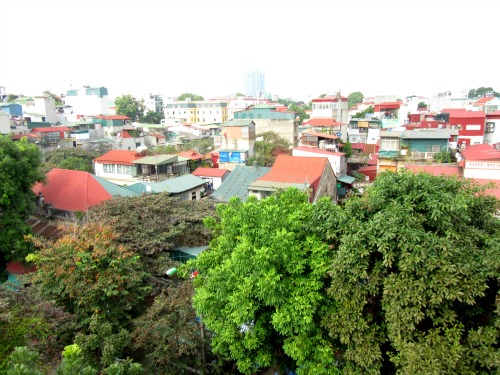 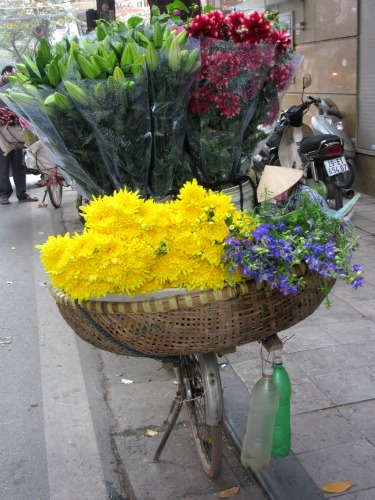 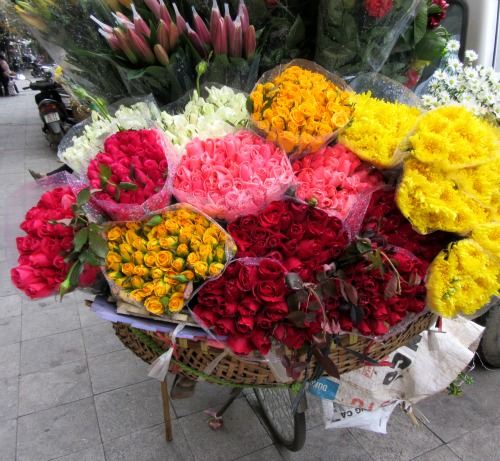 A few final thoughts about our trip to Vietnam.  It's a beautiful country that still bears battle scars, but with a new generation that is determined to see their country and themselves prosper as they move towards a more capitalistic driven economy.  There is an energy about the place that one can almost feel.  In a country where telephone service was previously beyond the reach of most people, almost everyone has a smart phone which has made it possible for people to run their businesses more efficiently and connect beyond their neighborhoods.  Being able to access the internet has opened new worlds, possibilities and ideas.

When I make comparisons between Saigon/Ho Chi Minh City (it's interesting to note that the people who live there refer to it as Saigon, while those in Hanoi call it Ho Chi Minh City) the first thing that strikes me is how open and welcoming Saigon is while Hanoi is more guarded and reserved.  The people of Saigon seem to have more freedoms and fewer restrictions than what we observed in Hanoi to the north.

It's not that we didn't meet some nice people in Hanoi (we did), it's just that as a whole they didn't seem to open up to Westerners like their neighbors to the south.  We met one young man in Hanoi who very much wanted to speak to those from the West.  He spoke of the freedom Americans have to say what is on their minds and his interest in American politics and the voting system there.  It was quite an eye opening experience and one that we won't soon forget.