I'm just going to say it straight out.  Some of the best food I have ever had the pleasure to experience was in Saigon.  While Thai food is bold and bright and in your face with fiery flavors, the food in Saigon was more subtle, yet sophisticated.  Great care is taken with presentation and an emphasis on the use of the freshest ingredients, seasonings and herbs seems to be of great importance.

There was nothing we didn't like.  Each time we thought we'd been served the best meal ever, the next one would be even better.  It was a food fest!

And, of course, because we were in Vietnam, it was also extremely affordable.  Most of the meals we ate were under $5 in US dollars.

Our first night in Saigon, we were tired and just wanted to get a quick bite to eat before calling it a day.  We ended up with this huge rice flour pancake stuffed with pork, shrimp and bean sprouts.  The pancake was paper thin with crispy edges and it was served with fresh herbs of mint, cilantro, lemon mint, and Thai basil.  The herbs are eaten with the dish and add another level of flavor.  We ended up ordering this more than once as it became one of our favorites. 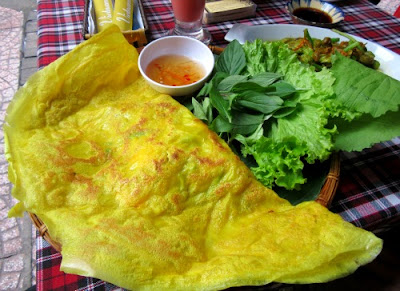 Because Vietnam was once ruled by France, there is a French influence in their cooking.  No where is it more apparent than in their baked goods.  Bread is not commonly eaten in Asia except for in Vietnam and their baguettes rival anything found in France.  Crunchy and flaky on the outside and light as air on the inside, the baguettes are the basis of the famous Vietnamese Bahn Mi which is a sandwich usually made of pork pate', sliced meat, pickled vegetables, spicy peppers and crisp cucumber.  Husband had several of these while we were in Saigon.

This is a typical Bahn Mi stand: 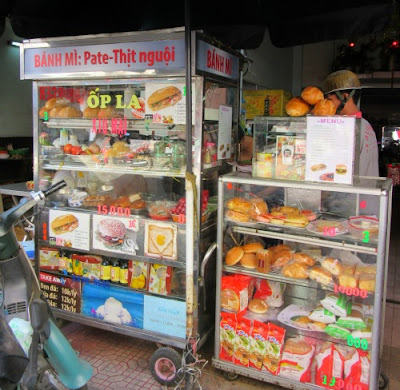 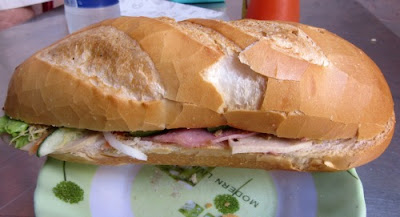 One night we had seafood for dinner.  Husband had the deep fried fish.  It was served with lettuce, sliced cucumbers, fresh herbs, rice paper and a dipping sauce.  The idea is to take a piece of fish, some of the vegetables and the herbs and roll it up in the rice paper.  The resulting roll is then dipped in the dipping sauce and eaten.  It was really good! 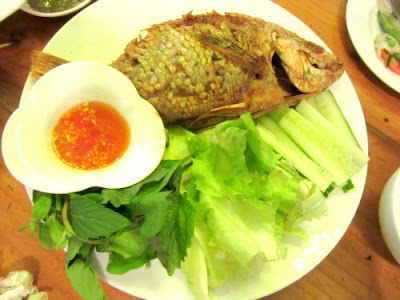 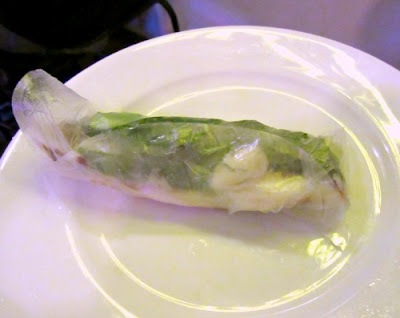 I had the salt and chili grilled shrimp skewers.  A little bit of work, but well worth the effort! 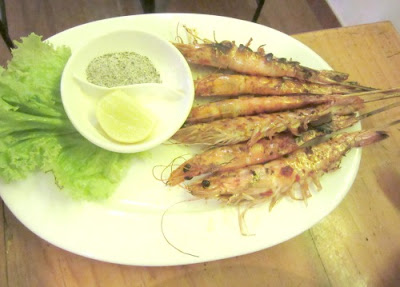 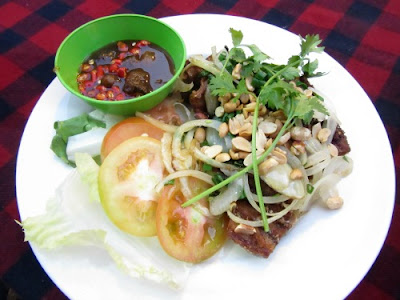 And, a side of deep fried tofu in a tempura batter.  The tofu was all melty and reminded me of cheese. 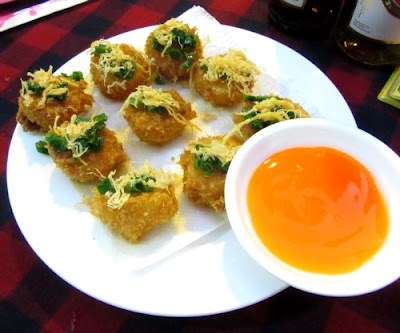 These little omelets were filled with shrimp and soy beans - delish! 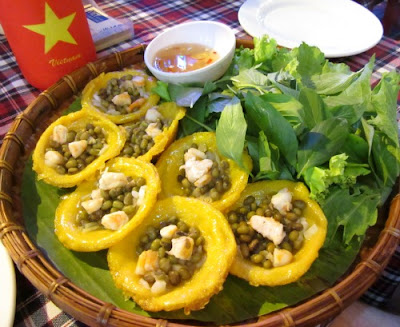 On the day we toured the War Museum, we had lunch at a wonderful Korean restaurant.   First we were served these fantastic side dishes and I could have made a meal out of them and been happy.  Clockwise from the top left we have chilled steamed vegetables, two types of kimchi, which is various fermented vegetables that remind me of a combination of sauerkraut and pickles, seasoned soy beans, fish cakes, seafood rolls and another steamed vegetable dish. 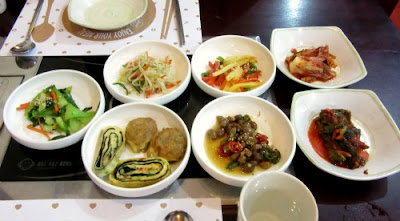 Next was the seafood soup: 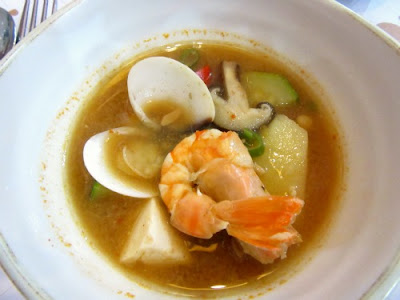 And, this fabulous seafood pancake.  It was made of an crispy egg crust and topped with vegetables and shrimp and sliced like a pizza.  Couldn't get enough of it! 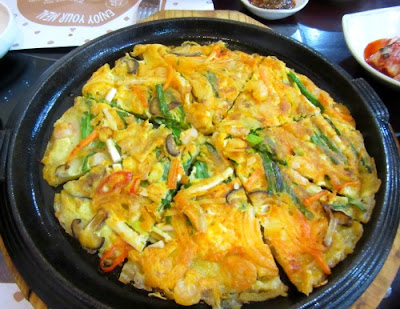 Now, I thought this little device the coolest thing since sliced bread.  Each table at the restaurant had one and it is used to call the server when he/she is needed.  It doesn't buzz; a light comes on indicated the people at the table need assistance. Awesome idea! 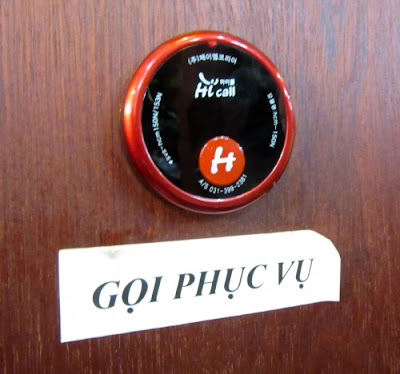 I had no idea pumpkin blossoms were edible, but they are and they are also wonderful.  We had two different versions.  Stir fried with garlic: 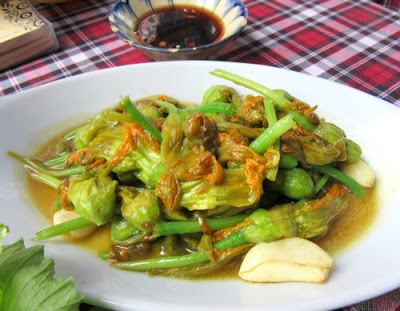 And, stuffed with minced pork and herbs, battered and deep fried.  OMG! 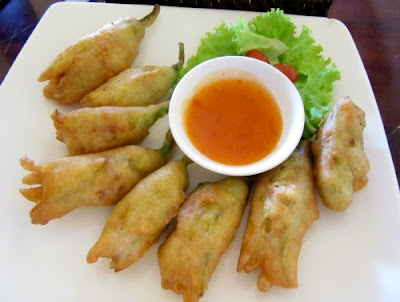 This was one of husband's favorites.  It was a stir fried noodle dish with shrimp, pork, Chinese sausage and vegetables topped with a lattice work of fried egg strips.  Not only tasty but beautiful too! 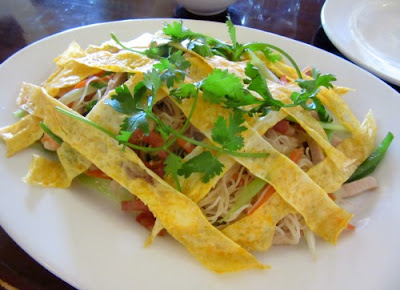 I really enjoyed the watermelon and pineapple smoothies: 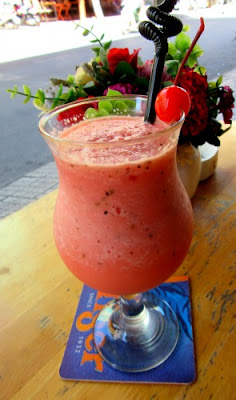 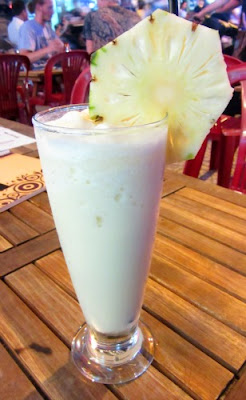 Stir fried beef and morning glory.  This is not the morning glory that grows in your garden; it is an aquatic plant that is commonly found in many parts of Asia.  Very low in calories and high in nutrients, it is also delicious. 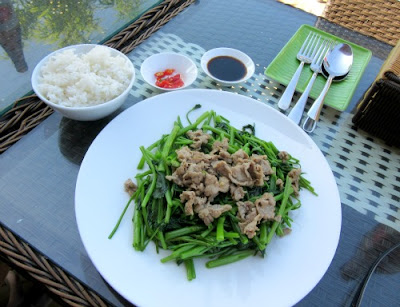 Pho is almost a national dish in Vietnam.  It is a soup that is made from a broth of ox bones that have been simmered for many hours.  When the broth is done, it is seasoned and beef, noodles, bean sprouts and herbs are added.  In this case, the bean sprouts and herbs were served on the side and I added the to the soup myself. 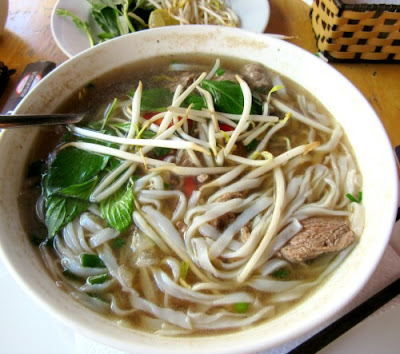 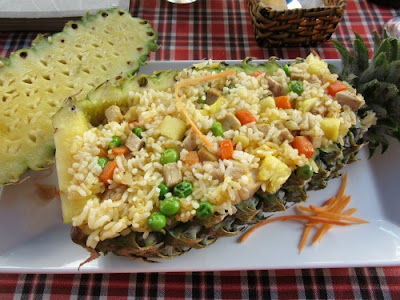 Some of the best Indian food we've ever tasted was in Saigon.  Dahl, curried chicken and garlic na'an: 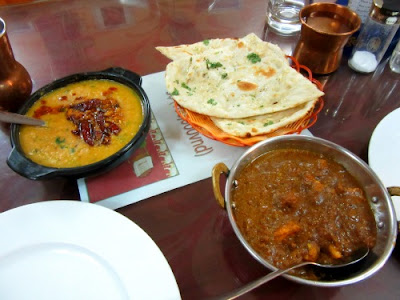 Saigon doesn't just serve Vietnamese food.  They offer a wide variety of Western style food from Italian pastas, American burgers and fries, French cuisine and much more.  On our last night in Saigon we had this pizza that was baked in a wood fired oven.  Yummy and I was ready for pizza too! 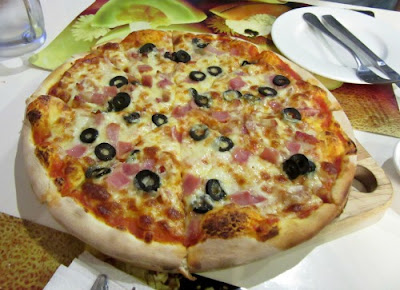 Having now sampled authentic Vietnamese food from Southern Vietnam I can honestly say that the trip would have been worth it just for the food.  I so wish I could go back for more!