Before leaving for Thailand, I had heard all kinds of horror stories about bathrooms in Asia.

Overall, it's been a pleasant surprise to find that the facilities in our apartment, the malls, bars and restaurants have been western style flush toilets.  All of the public bathrooms have been relatively clean.  One of the things I'd read was to be prepared by carrying your own tissue because toilet paper is rare.  I've not found that to be the case; even the most basic of bathrooms here have had plenty of toilet paper.

When asking where the bathroom or restroom is when out in public, try to remember that unless you ask for the "toilet", most Thai people are not going to know what you want.  You will get a puzzled look instead of assistance.

The bathrooms at the shopping mall, Terminal 21, are on the high end of the scale with completely enclosed stalls, built in bidets and seat warmers. 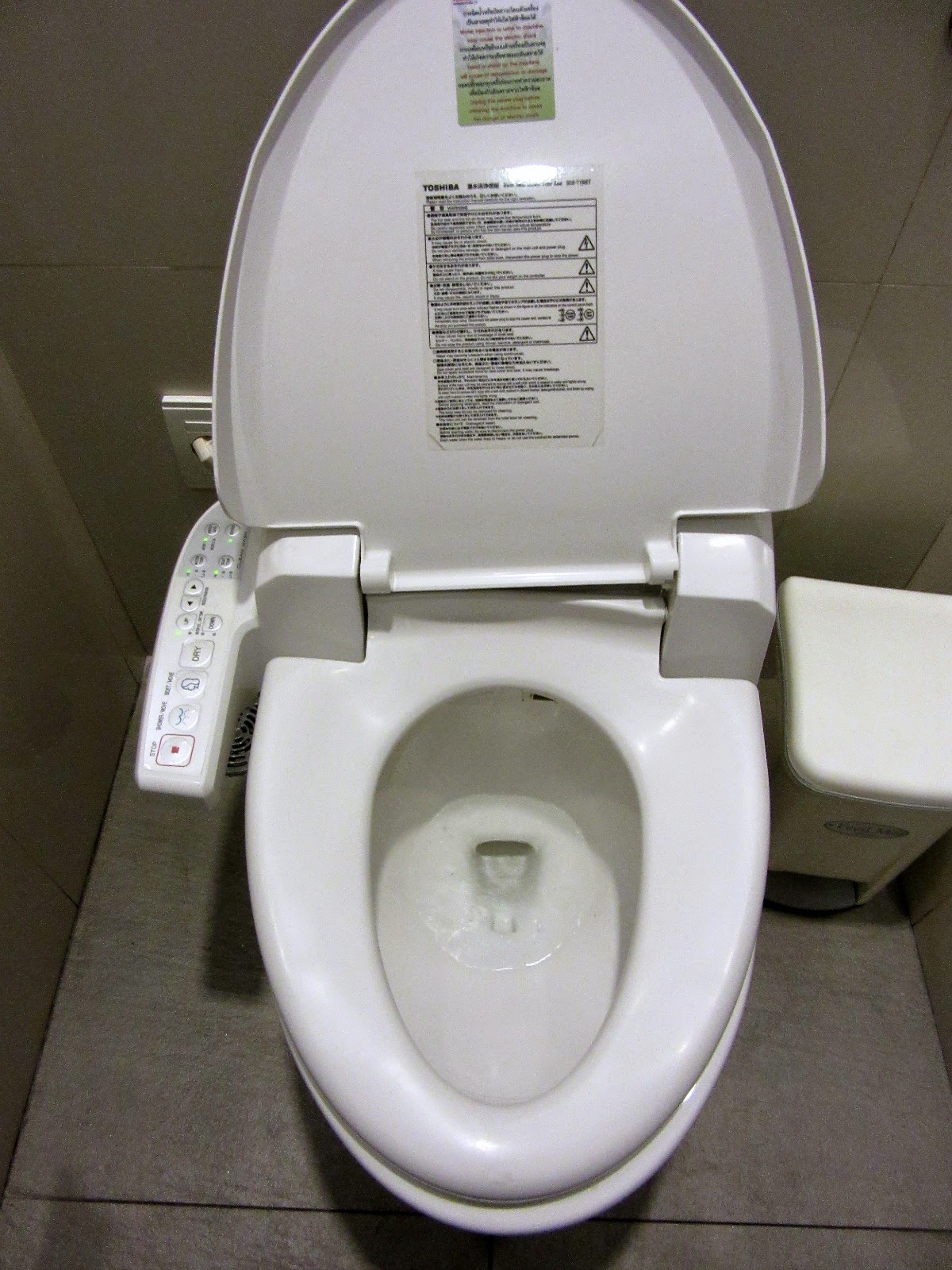 The dash board has the complexity of a jetliner cockpit. 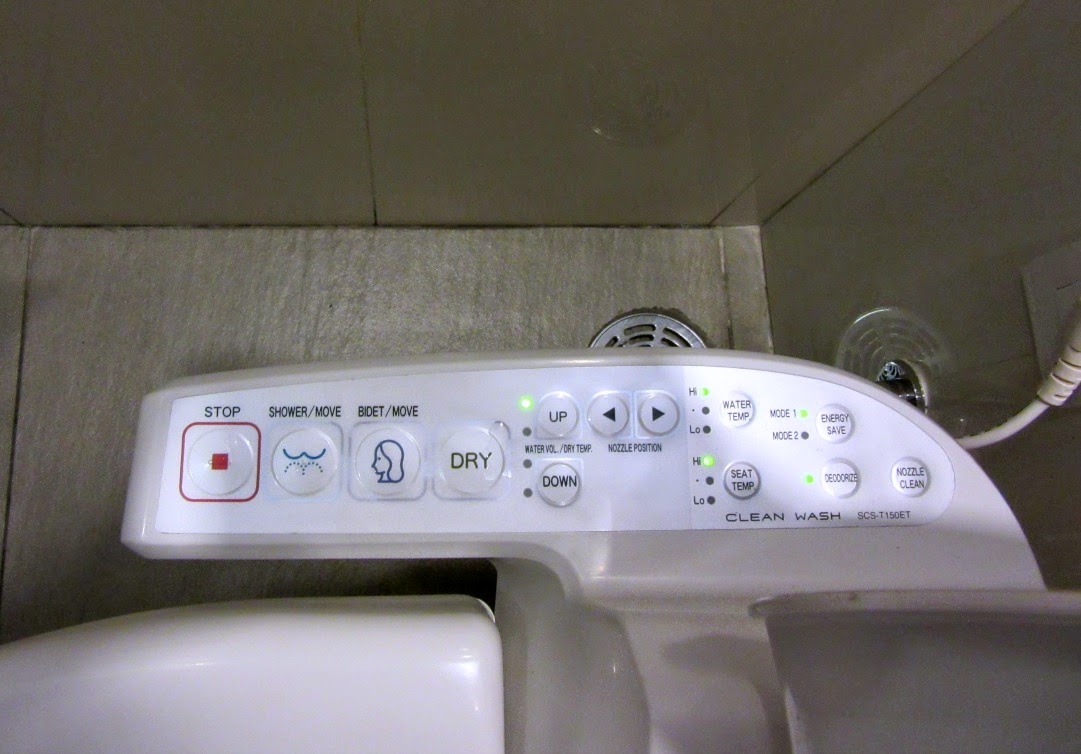 There is even sanitizer for the toilet seat next to the toilet. 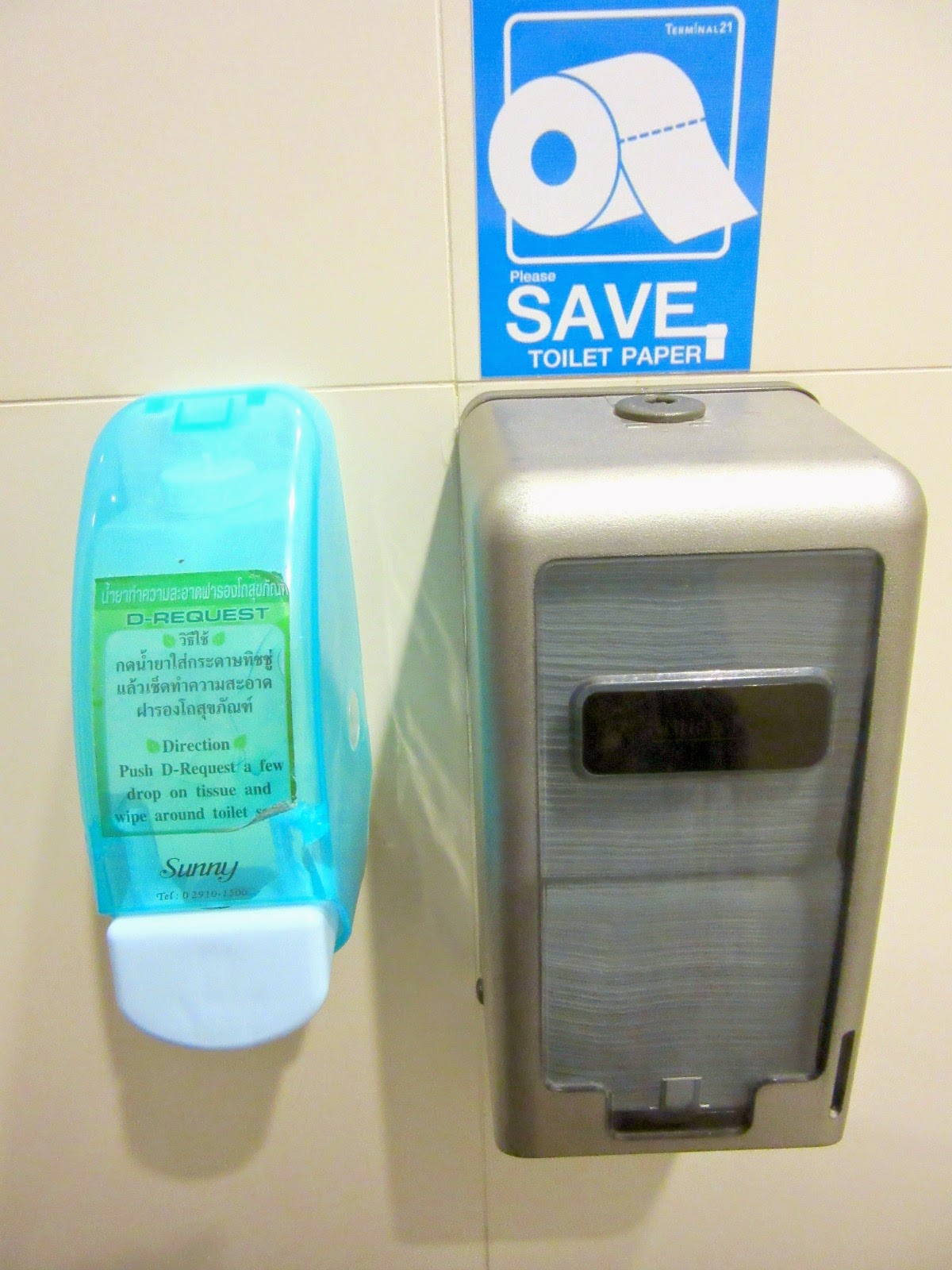 Plumbing in Thailand and most of Asia is not generally set-up to handle toilet paper.  That is why there is a bin next to the toilet - used TP goes in there.  Yes, I found this rather difficult to do at first, but you get used to it.  The alternative is backed up plumbing, something none of us want to face.  The rule of thumb is that if there is a bin or trash can next to the toilet, put your used paper in it.

There are plenty of signs posted to remind people of this. 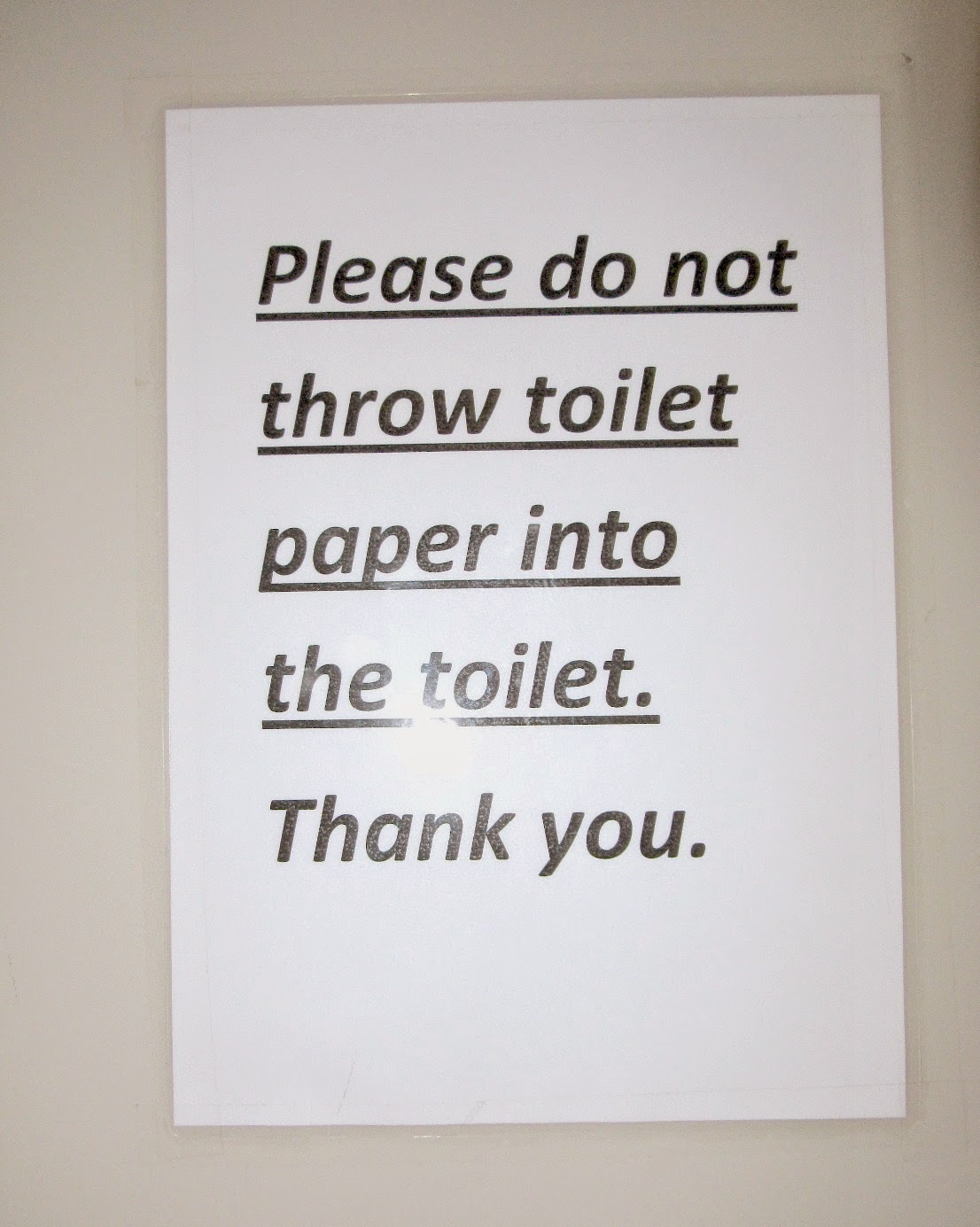 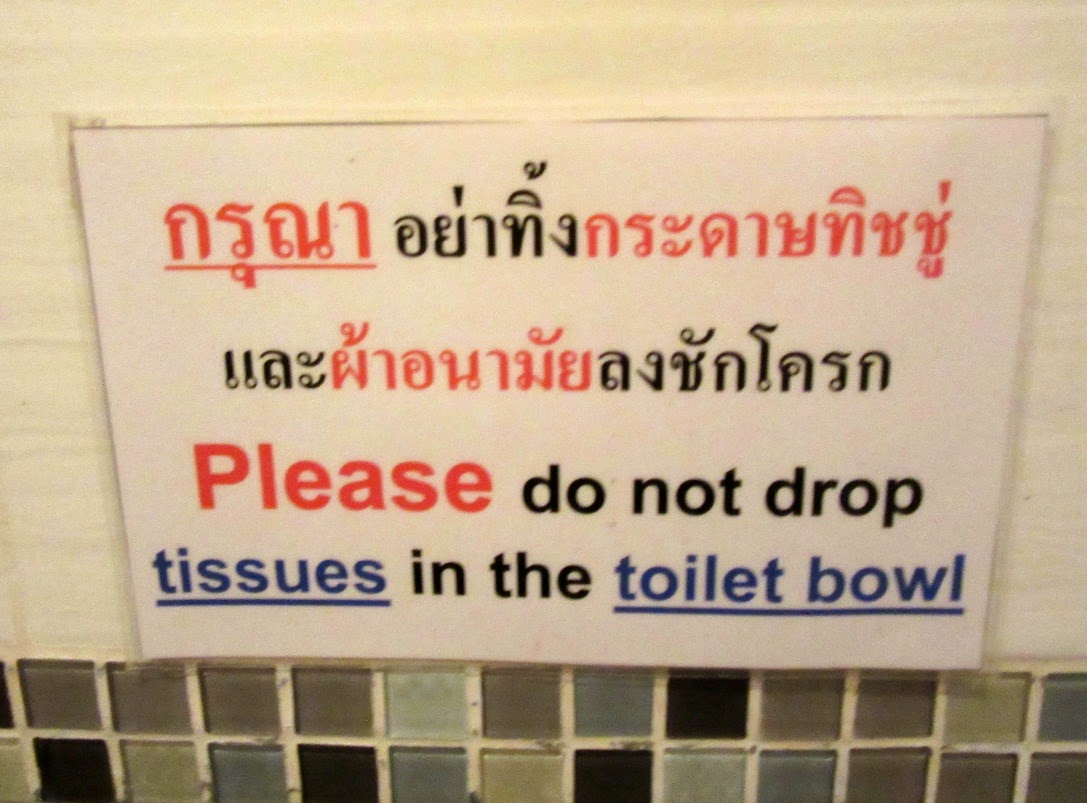 Don't put other trash in the bowl either. 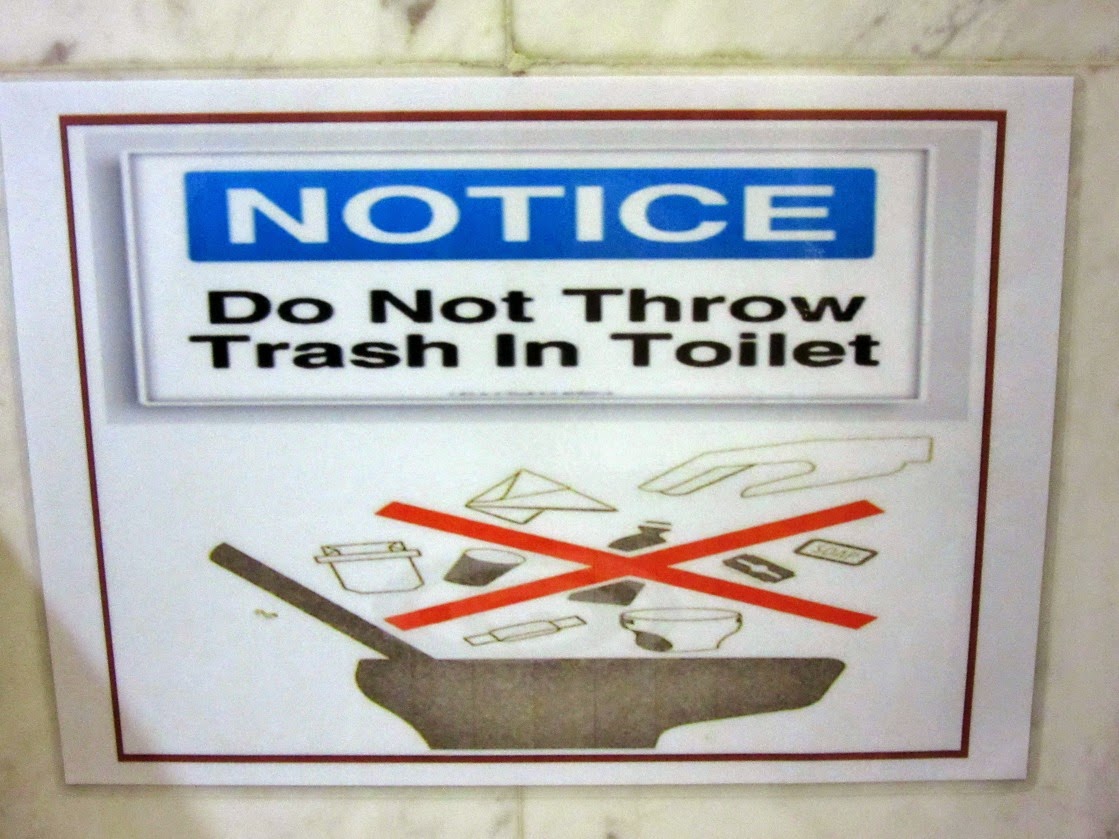 There are people from all over the world who come to Thailand.  Apparently many of them have never encountered western style flush toilets.  They are used to squat toilets.  There are signs for them too. 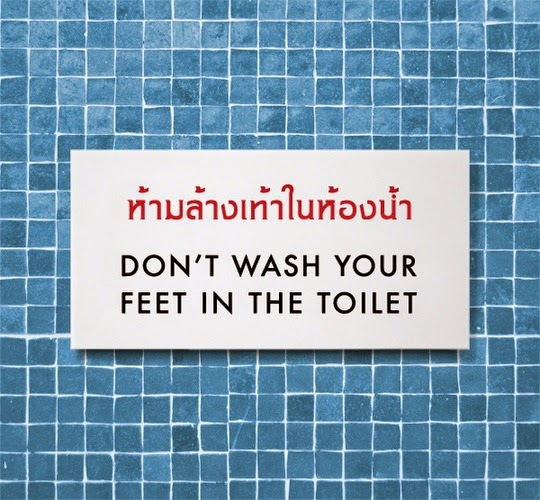 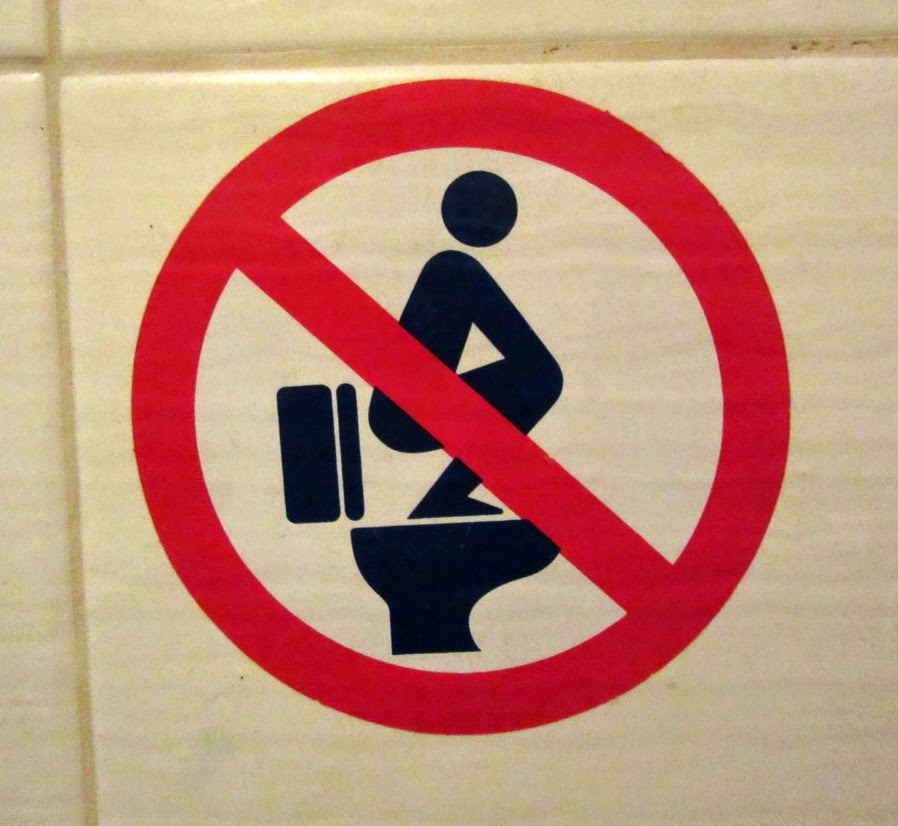 We took a trip to China Town one day and it was there that I encountered the dreaded squatter.  After staring at it in a sort of terror stricken fascination, I opted to hover over the flush toilet that had no seat in the stall next to the squatter.  All western women are skilled in the act of hovering as it's not unusual to find filthy public toilets that you don't want to touch any part of your body in the United States. 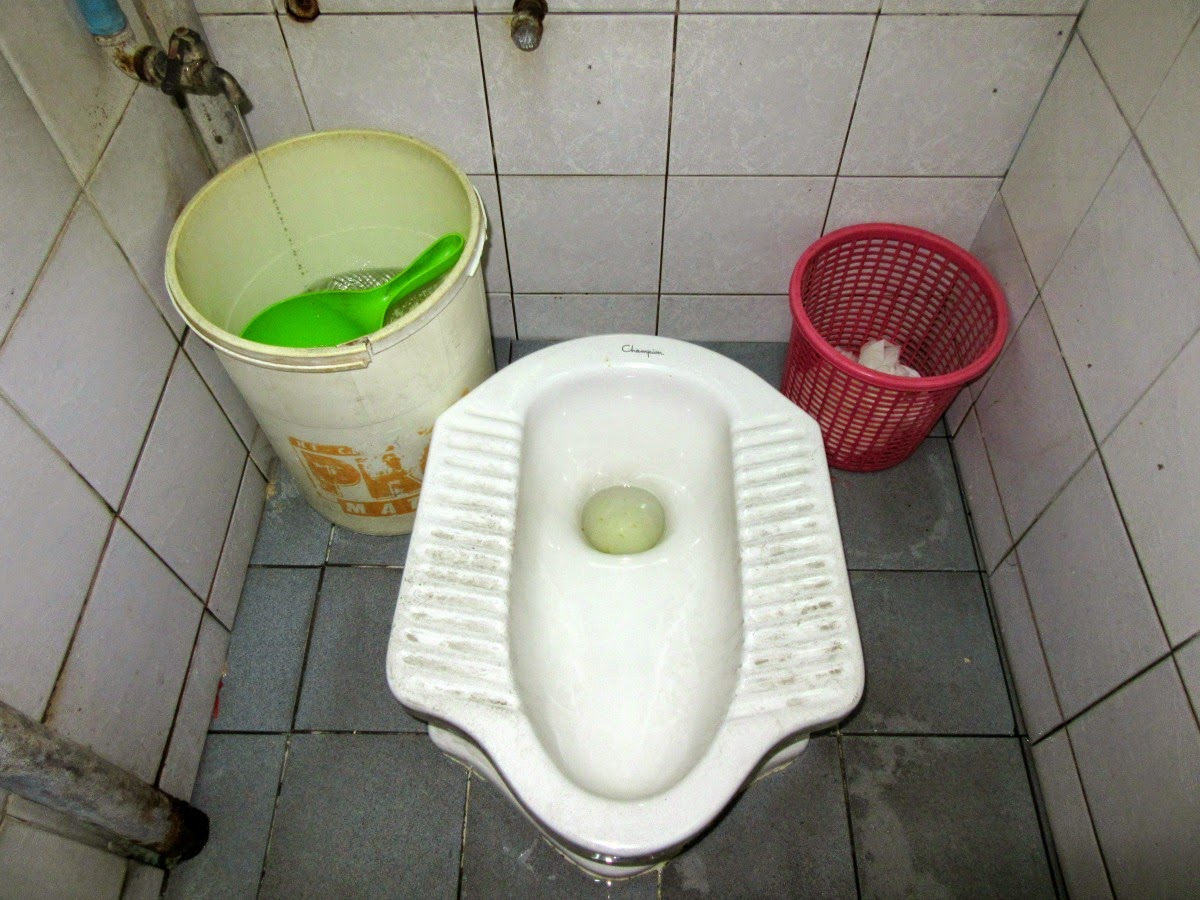 The day may come when I have no choice but to use one of these, so when we returned to our apartment from the China Town outing, I went online to learn how to use a squatting toilet.  I found this article which explains it better than I ever could.  How to Use a Squat Toilet


Out in the countryside is a different story where western style plumbing is rare.  Travel out of large cities such as Bangkok with the expectation that you will find yourself using a squat toilet or very possibly just a hole in the ground.  My motto is to be a girl scout and prepare as best you can for anything - stuff a few tissues in your bag.  You'll be glad you did!