I have to be honest here.  While the food in Hanoi was good, it couldn't touch the creativity, flavors, presentation and use of ingredients in Saigon cuisine.  Compared to Saigon, the food was simple, yet satisfying down home food.

But, that's not to say that we didn't have some gems while in Hanoi.  We did and those are what I am going to share in this post.

We had this dish on our first day in Hanoi.  Thin slices of beef wrapped around string mushrooms and covered in a brown sauce.  It was very good and a hearty dish as well. 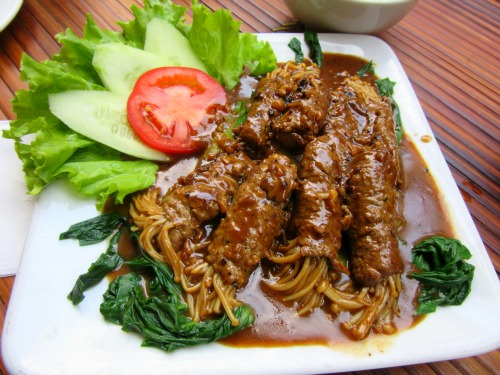 One of my favorites - minced beef and herbs rolled in betel leaves.  The betel leaves had a nice slightly crisp texture that complemented the meat mixture perfectly. 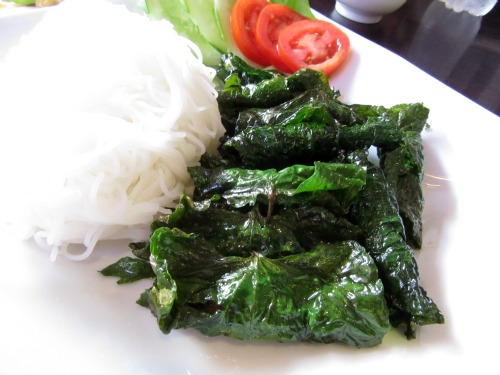 Crab rolls - the wrappers were filled with crab and vegetables and deep fried until crisp. 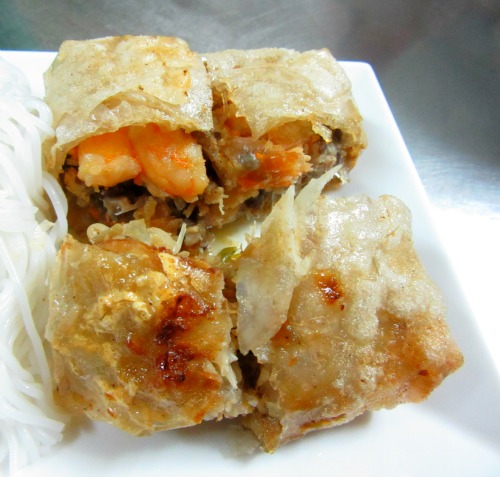 Deep fried spring rolls.  These rolls had a different wrapper than what we'd seen previously.  I don't really know how to describe them other than to say they looked like they'd been rolled in thread thin strands of dough and deep fried.  Interesting and tasty take on spring rolls! 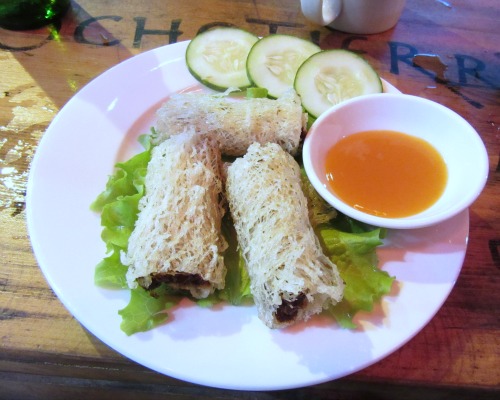 Now these two dishes were something really special.  The first was an appetizer served in small dishes that contained a rice flour dough that had a glutenous, jello like consistency; my guess is that they'd been steamed.  Pieces of dried shrimp were then sprinkled on top.  Due to their consistency, they were stuck to the little dishes and there was a trick to getting them loose.  A thin and delicious sauce came with them; spooning a little of the sauce into the dishes resulted in the sauce seeping underneath and loosened the little cakes.  Once loose, they slid right our of their container and into one's mouth, reminiscent of eating oysters! 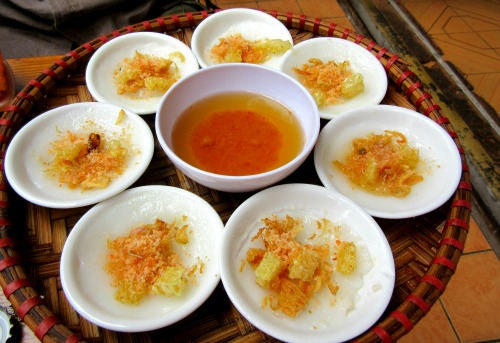 Next was this wonderful egg pancake.  We surmised that the egg was scrambled and cooked just long enough for it to set at which time it was deep fried until crisp.  It was then topped with pork, shrimp and beansprouts and sliced like pizza.  The proper way to eat it was to take a wedge, roll it in rice paper along with some of the fresh cucumber or pineapple pieces and herbs that came with it and dip into a thick soy bean based sauce.  We have never had a sauce as good and are now wishing we'd asked the restaurant for the ingredients.  When we are back home, we are going to do some experimenting to see if we can duplicate or at least come close. 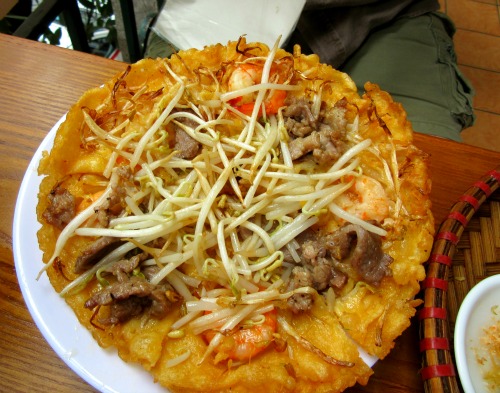 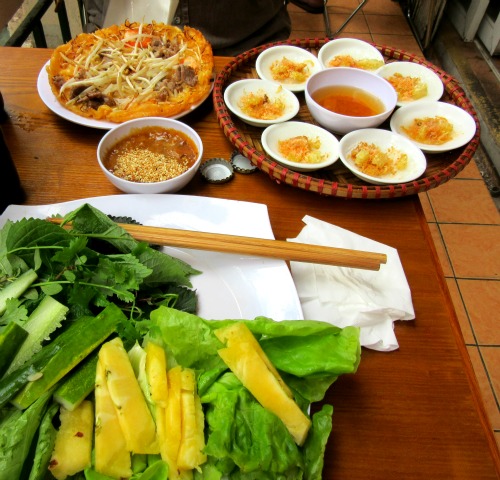 We had dinner at the Countryside Restaurant on our last night in Hanoi.  It received wonderful reviews (deservedly so) on Trip Advisor and was within walking distance of our hotel.   We ordered fried chicken with vegetables and deep fried fish with herbs.

The chicken was not battered; rather it was seasoned and put directly into the hot oil resulting in a crispy exterior, but without all the coating that often comes with fried chicken, and a moist interior.  After it was fully cooked, the chicken was chopped into four pieces.  I love the care that was taken with the presentation of the dish in the form of cucumber ribbons and carrot flowers. 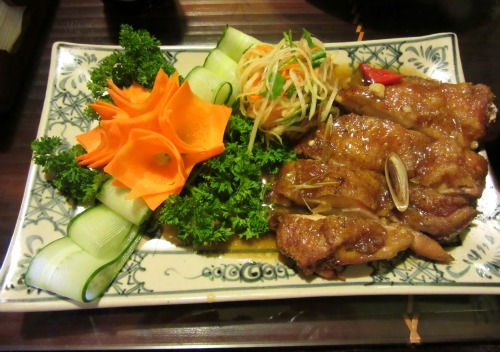 The fish was cut into pieces, lightly coated with a seasoned tempura batter and also deep fried.  Served with fresh herbs such as mint, lemon mint and cilantro, this was another excellent dish.  We ate everything on both plates! 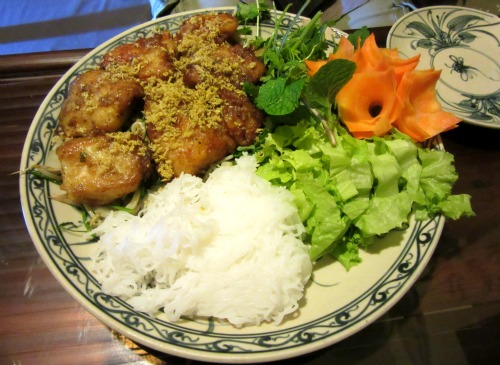 There is no photo, but we came across a little stall on the street run by a woman with a different take on the traditional Baun Mi.  Instead of cold cuts and pate, she put small pieces of chicken or pork which had been grilled over charcoal inside the baguette along with the traditional condiments, vegetables and pickles.  It was fabulous!

While the food in Hanoi wasn't as creative or exciting as the food found in Saigon, we definitely enjoyed some special meals.  It was a pleasure to visit different restaurants and try new foods during our stay in the city.